With the 49ers and Ravens set for Super Bowl XLVII, here are five things that stood out from my perspective after watching the NFC and AFC Championship games. 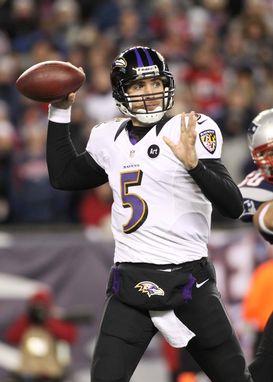 US PRESSWIREJoe Flacco threw 3 TDs in the Ravens 28-13 win over the Patriots in the AFC Championship game.

1. Ravens’ 2nd half game plan: Give Baltimore OC Jim Caldwell some credit here for what Flacco and the Ravens did in the second half. Look at the screen game, the inside runs and the short to intermediate route tree. Flacco was able to work the middle of the field, throw the underneath option routes and target inside breaking cuts. And don’t forget about Anquan Boldin in the red zone. The Ravens’ WR beat Cover 0 (blitz-man with no safety help) on the inside release and then came back to set up the seam (quick inside step to force the DB to open the hips). Two solid routes that allowed Flacco (21-36-240-3TDs) to look up the WR for TDs. Adjust the game plan and win matchups. That’s what I saw from this Ravens’ offense in the second half.

2. 49ers’ Option scheme: Colin Kaepernick (16-21-233-1 TD) was impressive throwing the ball today in the Niners' 28-24 win win, but let’s focus on the option game in Jim Harbaugh’s offense. Start with LaMichael James on the Inverted Veer (Gun alignment, backside guard pull) and then move to Frank Gore in the Read Option. With the Falcons keeping their DEs up the field (play the QB through the mesh point), the 49ers ran Gore on the inside give with the FB/H-Back leading up through the hole. Plus, with the TE using an “arc” release at the snap (outside release, work to the second level), the SS was removed from the run front (gives the safety a false pass key). It was obvious the Falcons game planned to limit Kaepernick in the option scheme off the Green Bay tape from last weekend, but they didn’t account for Gore (21-90-2TDs) or James on the TD run.

3. Ravens’ defense: I think this is a situation where we look beyond schemes or Xs and Os. This defense was able to match the pace and tempo of the Patriots, challenge receivers at the line of scrimmage, tackle and play physical. And they defended the end zone for the majority of the game when Tom Brady and New England moved the ball into plus territory. I know they gave up some numbers, but the Ravens played with an agressive style that will show up when you turn on the tape. A fast, physical defense that brought pressure and finished off ball carriers. This unit is going to put a helmet on you.

4. Falcons’ 4th down call: I know there is a discussion with Bowman vs. White on the inside option route, but I don’t see a flag there. Allow the defender to play through the break and establish some sort of position within five yards. However, what about the backside option for Matt Ryan? With Tony Gonzalez aligned as the X receiver, the Falcons ran a basic 3-step slant to the open (weak) side of the formation. That gives Gonzalez inside leverage vs. a CB with FS Dashon Goldson sitting over the top and driving the route. Looking at the game situation, isn’t this the matchup you want? Sure, this is a classic catch and collision play with the FS taking an angle to the slant (don’t know if that is a guaranteed conversion). But that’s where I’m throwing the ball on fourth down with a trip to the Super Bowl on the line.

5. Julio Jones: Even in the loss, we have to talk about the Falcons’ WR and his production. Jones (11-182-2TDs) is so strong within the route stem, can create separation back to the inside, plus he will go up and get the football at the point of attack. You could see the Falcons’ game plan early with Jones on the deep curl, the dig, etc. Create opportunities for Jones to push the CB up the field, work back inside and use his size to make the catch. And on the “Sluggo” (slant and go), there was Jones’ ability to finish in the end zone. A tough matchup for any CB that has to find the ball.