Coaching session: inside the Cover 2 safety

Today, let’s talk about the Cover 2 defense—but look at it from the angle of the safety position. Techniques, run-pass reads, route schemes, tackling, etc. We know that Cover 2 is a lead call in Chicago, Indy and Minnesota. But is also a very reliable defense that exists in every playbook, including the 3-4 pressure teams such as the Jets, Ravens, Packers and Steelers.

Read No.1: The base rule for the safety position. The No.1 wide receiver aligned outside of the numbers will tell you everything. Take three shuffle steps and get you eyes on the WR. If he releases vertically off of the ball it is a pass (we will get to the different stems). If he comes off of the ball to block the rolled up corner, it is a run. This sounds simple and almost too basic, but it holds true every time. Get to your landmark (top of the numbers) and bring your eyes back to the QB once you have determined that it is a pass.

WR releases: Let’s break this down and assume we are talking about standard splits at the bottom of or outside of the numbers. An outside release equals two things: a 9 (or fade) route and a comeback. That’s it. Not enough room to run the out or the 7 (flag). Almost the entire route tree is eliminated because of the hard outside release. With an inside release, it is fair game. You can get the deep 15-yard dig, the 7, the post, the skinny post, the post-corner, the curl and the entire 3-step game. Know that every route (outside of the 3-step game) breaks at a depth of 12-15 yards and play your technique.

Proper depth: Changes depending on the system. Lovie and Giants’ defensive coordinator Perry Fewell coach their safeties to play at a depth of 15-yards (at the snap of the ball). With Gregg Williams at Washington, we played at a depth of 12-yards at times so we could still react to the run. Whatever that depth is, the main thing is being able to stay on top of the WR. If you can do it from 12-yards, go with it. But, make sure you get there. Not everyone can be like Troy Polamalu and get back over the top of the WR (from LB depth) at the snap of the ball and play with his back to the quarterback.

Filling the alley: You are a secondary force player vs. the run in Cover 2. No need to try and make a stop at the line of scrimmage—because you can’t get there. Just like we talked about above, read the release of No.1 and then start to come downhill. Your job is to fill the alley (between the CB and the core of the formation). If the CB does his job, there will be a perfect running lane to fill and make a solid form tackle on the running back. Versus run away, trail the play and be alert for any cutback that might break through the middle of the defense—and always play to your pursuit.

Interceptions: One of the main reasons that safeties love to play Cover 2 is the opportunity to get picks. Most of the time, we will see a tipped pass or a basic overthrown ball--right into the safety's hands. "Basket interceptions" is what we call them. Again, it goes back to your technique. Play over the top of the receiver at the proper depth and good things happen. 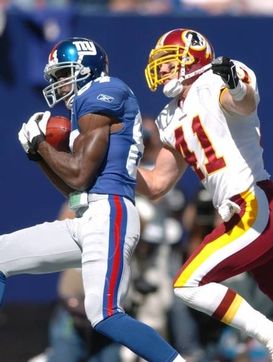 ICONThat's me back in '04 giving up a TD pass from Kurt Warner to Tim Carter in Cover 2.

Sudden Change: This got me back in ’04 against Kurt Warner and the Giants. A “sudden change” is a term used after a turnover by the offense. Grab you helmet, get on the field and expect play action and the deep ball. And that probability goes up with the ball in between the 40’s (where offenses will take a shot). In that situation, take your depth back a couple of yards and concentrate on the release of No.1. What did I do? Played Cover 2 at an arrogant depth of about ten yards, got my hips turned on a vertical release and bit on a double move from Giants’ WR Tim Carter. You want proof? Check out the picture. It has TD written all over it--and I am in panic mode. That was bad football by No. 41.

Break downhill: With the proper depth, every safety should play the ball from a top down perspective—and break downhill. Too often we see safeties give up the 7 route or the post because they are breaking laterally on the throw—a sign of improper depth. Coaches want their safeties to break on the throw and then separate the receiver from the ball. The top safeties, such as Ed Reed, will break in front of the receiver, but unless you have that talent, plant that foot once the QB takes that top hand off of the ball and go. And know the top schemes. Expect to see 4 verticals, flat-7, etc. when you come out of the huddle.

Know the personnel: Save the best for last. If you are lined up against an Andre Johnson, Larry Fitzgerald, DeSean Jackson, Greg Jennings etc. play with more awareness. Know that they can get on your cushion (space between you and the WR) quickly and be ready to turn your hips and run. In my day, when I played against Randy Moss, that pre-snap depth went to 18-yards. You can make a tackle on a dig route or a 7. But, you can’t make a tackle when they get over the top. No reason to give up the deep ball in Cover 2.

Want more? Let me know what you want me to break down…