Previously, we talked about the techniques, run-pass keys and fundamentals of the safety position in the Cover 2 defense. Today let’s move down to the corner position. A guideline to playing out on the edge in Cover 2: techniques, eyes, hands, etc.

Click here to the read my chalkboard breakdown of the Cover 2 defense. 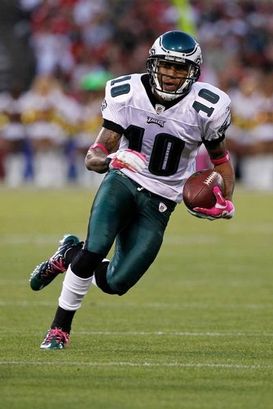 ICONYou can't give a free release to DeSean Jackson in Cover 2.

Re-Routing No.1: The “jam” is the top priority for the CB in Cover 2. Allowing a free release to the WR at the line of scrimmage puts pressure on the safety. The CB has to use his hands to disrupt the release and the timing of the route and give the safety enough time to build his cushion (distance between DB and WR). You want an example? Eagles-Redskins. First play on Monday night. DeSean Jackson gets a free release vs. DeAngelo Hall, gets on top of safety LaRon Landry and goes to the post. Easy TD throw for Michael Vick. Don’t put the safety in a compromised position.

Force an inside release: CBs are coached to force the WR to take an inside release. Why? Because an outside release forces the safety to widen from his landmark (top of the numbers). And that can turn into a big play vs. two vertical routes down the seam (think 4 verticals in the Colts’ playbook). Forcing that inside release allows the deep half players to work off of their landmarks—which gives them the best opportunity to make a play. Don’t get it done and you will be in the same position as the Bears were vs. Tom Brady at the end of the first half—with Deion Branch running down the sidelines. Bad technique from Bears’ CB Charles Tillman.

Protecting the “hole” in the defense: We hear it during every game, right? There is a “hole” (or target zone) in Cover 2 between the safety and the corner along the sideline. The 7 (or flag) route and the quick one-step fade are run to attack that area of the coverage. It is on the CB to jam No.1 and then sink (at a 45 degree angle) to protect the safety and take away those two routes. Whenever you see the quarterback complete one of those two throws vs. Cover 2 it is because the CB didn’t get enough depth. That isn’t the safety’s play to make.

The zone turn: Different than the man-to-man techniques we previously talked about. When the corner sinks, he uses what is called a “zone turn” to read through the QB. Turn you back to the sidelines and get your depth so you can plant your up-field foot and react to the flat or the check down. To excel in zone coverage, you have to have your eyes on the QB and use the zone turn—a tough technique to learn.

Setting the edge: In most cases, you will have to work against a WR stalk block on the edge. Play with contain principles and force any outside run (stretch, toss, reverse, etc.) back to your defensive pursuit. As we talked about before, the safety will run the alley (between the core of the formation and the CB) and it is imperative that you turn everything back to your help. 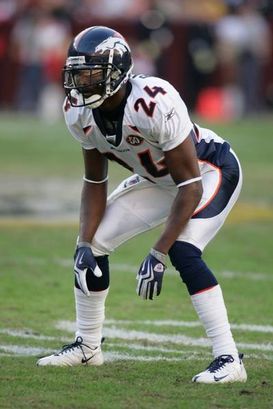 ICONChamp Bailey plays big in the run game because he reads his keys at the snap.

Run-pass keys: Read through the TE to the quarterback on the closed (or strong) side, and through the left tackle to the quarterback on the open (or weak) side. “High hat” tells you pass, while “low hat” tells you run. I played with some CBs (Champ Bailey for example) who could read run-pass and go. When you turned on the film, it looked like a Corner Cat (CB Blitz), but is was just as example of a player knowing the difference between a pass set and a run set. And, when you have two CBs who can read the run that quickly, you are essentially playing with a nine-man run front.

Tackling: Can’t play in a Cover 2 defense if you don’t tackle. We can apply that to every position of the field, but the theory behind the scheme is to force the ball to go underneath. However, how many times do we see the offense pick up seven yards on 3rd and 6 call because of a missed tackle? Rally to the ball in the underneath game and make the tackle to get off of the field. No one does this better than the Vikings’ Antoine Winfield.

The backside of a slot: When you are facing a “nub” TE (last man on the line of scrimmage), you are now the primary force in the run game and control the “D” gap. What does that mean? Pulling guards, lead blocks from the fullback, etc. We will see most CBs go low and “cut” the legs of a guard or a fullback to try and create a pile. But as one coach I played for always used to say to our corners: “Time to put your big boy pads on” when you are the on the backside of a slot formation. It can nasty down there.

You want to see some technique breakdowns for the offensive side of the ball? Let me know…