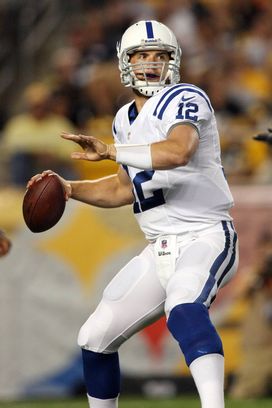 US PRESSWIRELuck made some adjustments after a slow start and put together multiple scoring drives for the Colts.

Luck vs. Pittsburgh's pressure scheme: The rookie had to make some adjustments vs. the Steelers defense after he struggled to start the night. This unit under Dick LeBeau will play with multiple fronts, bring zone pressure and use pre-snap disguise in the secondary to roll into coverages. That's tough on any rookie QB in August. However, Luck did take control of this offense after the Ike Taylor INT, worked the middle of the field, displayed veteran poise in the pocket (again) and put scoring drives together. This will be a good tape for Luck to watch because he can make some corrections and learn how to attack a top-tier defensive unit.

Taylor’s INT: The Xs + Os breakdown: zone pressure with 2-Man (2-deep, man-under) in the secondary. The Steelers showed an exotic look at the line of scrimmage, rushed five and dropped six into coverage. With Taylor playing “trail-man” technique, he is going to undercut any outside breaking route because he has a deep half safety over the top. Luck has to put this pass high and on the upfield shoulder of the WR when throwing the “Out” route vs. 2-Man. Instead, the rookie QB leaves the ball to the inside and you can’t do that against a veteran DB. That’s going the other way for six.

Brown’s TD: I like seeing this because it allows the Steelers to get the ball in the hands of a WR with open field ability. Ace personnel (2WR-2TE-1RB) on the field with a bunch alignment to the closed (strong) side of the formation. Use run action to the open side and throw the “Bubble Screen” to Brown. After that, let him to go to work. The Steelers’ WR made multiple Colts’ defenders miss and displayed his lateral ability. Simple scheme that can turn into an explosive play with the proper personnel on the field.

Coby Fleener: The rookie TE out of Stanford should put up numbers in this system. Think routes inside of the numbers (dig, seam, skinny post, option, etc.). Plus, we can’t forget about Fleener as inside “hot read” vs. pressure as Indy showed tonight. And when the Colts start to game plan for regular season football, Fleener has the ability to align removed from the core of the formation as a receiver. Lot of options here for a player that can become a consistent target for Luck.

Clark in blitz-coverage: Next time you watch the Steelers, check out safety Ryan Clark in coverage in both zone and man-pressure. He doesn’t take false steps at the snap or stick his eyes in the backfield. Instead, you get a “flat-foot” read, clean angle and technique on contact. That’s how you coach it up front a DB perspective. A sign of a veteran player in the secondary.

Wayne’s pre-snap movement: Throughout the telecast, the alignment of the Colts’ WR was a topic of discussion. In this new scheme, Wayne is being asked to play in the slot, move before the snap, etc. This should lead to specific matchups that cater to the WR.

Option Football: Anyone expect to see Luck running the option on the goal line? Motion to a 2-back split set (with Luck in the gun), ride the dive back through the mesh point (think Zone Read) and option the edge of the Steelers' defense. The replay showed Luck wasn't in, but I still like the idea of putting it on tape in the preseason. Give opposing defenses something to think about.