Could Tebow provide an impact on special teams?

There have been plenty of discussions on how to get Tim Tebow on the field in New York. Whether its pushing Mark Sanchez for the No.1 job or playing as a situational QB to take advantage of his skill set, we should expect Tebow to see some real playing time this season with the Jets. 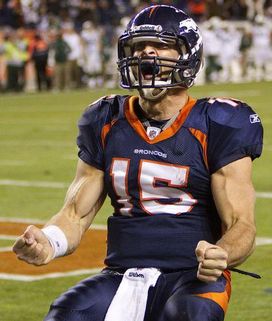 Could Tebow also see the field in a special teams role this season for the Jets?

However, does that include contributing on special teams?

A possibility that was disucssed by SI's Peter King and in Dan Pompei’s Sunday Blitz here at the NFP. As one NFL GM told Pompei, “He has enough size and toughness. You’ve never seen it, so you don’t know for sure, but I think he can play on special teams.”

Former head coach and current ESPN analyst Jon Gruden was more specific, suggesting to Pompei that Tebow could be used as the PP (personal protector) on punt coverage and as the holder on kicks. The reason: running fakes.

As Gruden said, “All the things you’d have to prepare for that would restrict your rush. You would have a hard time bringing an all out rush.”

The fakes? I get it. I played the PP position for multiple seasons. Every team will use similar concepts when running a fake: the inside trap, speed option (use the backside wing or punter as the pitch man) and the quick seam route (front side wing will take a vertical release).

Basic stuff here (that is never called) when you have a DB playing the position.

Tebow would change that. Enough to impact a seven or eight man rush? Possibly—depending on what the Jets put on tape in the preseason. Because the threat of running a fake increases when you have a player that can handle (and throw) the ball at the PP position.

But that’s only a small sample of what contributing on special teams requires out of a coverage player. This isn’t about being a guy that “wants” to run down the field. An “effort guy.” That’s little league stuff.

In the NFL, there are plenty of players that make a career out of covering kicks and it involves technique—practiced technique. It’s a full time job to defeat blocks, understand return schemes and to tackle in the open field.

Plus, it is violent. High-speed collisions and crack back blocks that will knock you clean off your feet. And with that comes some real injuries. Shoulders and knees.

Its grunt work that doesn’t count on anyone’s fantasy roster.

I don’t doubt Tebow’s athletic ability, speed or desire to covering a kick in this league if that is one of the (many) roles the Jets have planned for him. But does that mean we will see Tebow get down the field, breakdown and make a tackle on some of the top return men in the NFL in 2012?

That’s a tough sell from my perspective.