Let’s run through my game notes from the Cowboys' 24-17 win over the Giants in New York. My take on personnel, scheme plus some Xs and Os to break down. 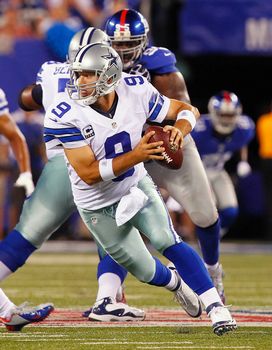 US PRESSWIRERomo's ability to extend the pocket led to points for the Cowboys' offense.

Romo’s production: The Cowboys’ QB made a poor decision early in the game trying to throw an inside breaking concept vs. the Mike Backer in Cover 2. That was a pick before it even left his hands. However, there is no question he played some good football the rest of the night. Romo’s ability to extend the play, slide in the pocket and check at the line of scrimmage led to points for this Dallas offense. Find the favorable matchup on the outside vs. a secondary you can exploit and let your WR go make the play. Big night for Romo in the box score: 22-29-307-3TDs-1INT.

Giants' Pierre-Paul: I want to say this is “coaching tape” when you study the Giants’ DE, but his athletic ability (plus power) is so unique I don’t think you can teach this. Look at his lateral movement, speed up the field and the strength to walk an OT back into the QB’s lap. And he will only get better.

Victor Cruz’s drops: Rough night for the Giants’ WR. With Cruz, he is at his best inside of the numbers with Posse personnel (3 WR-1 TE-1 RB) on the field. Think of the “option” route here where he can play off of a defender's leverage and work laterally in the middle of the field. However, you have to catch the football. Three drops isn’t going to cut it for a veteran wide out in a divisional game.

DeMarco Murray: Great burst when the Cowboys' RB sqaures his shoulder pads to the line of scrimmage allowing him to get vertical through the hole—plus he is physical on contact. This is the perfect example of why the running game still sells in the NFL when you are protecting a lead in the second half. Run the base power game, move the sticks and let your No.1 back produce. I was impressed with Murray (20-131).

Dez Bryant vs. press-man: The Cowboys’ WR beat up Giants’ CB Corey Webster multiple times at the line of scrimmage vs. press-man. Looking at Bryant’s technique on the release, he has the ability to force a CB to settle his feet and “open the gate” (open hips instead of mirroring the release) because of his change of direction skills.

DeMarcus Ware on the edge: Similar to Pierre-Paul, we are again looking at a high-level athlete with various moves at the point of attack. I expect to see offenses using 7-Man protection schemes vs. the Cowboys because of Ware and the pressure Rob Ryan will bring from the secondary.

Ogletree’s first TD: The Cowboys aligned in empty and ran “Doubles Smash-7” vs. Cover 2. A route concept you will see every Sunday vs. 2-deep coverage. However, because Romo was able to slide and extend the pocket, Ogletree (the underneath “check down” option) converted up the field and got on top of the Mike Backer. And with both safeties occupied by the 7 (corner) routes, the middle of the field is wide open. The Mike needs to “plaster” to his coverage and carry Ogletree (8-114-2TDs) vertically.

Ogletree’s second TD: Double-move (Out and Up) vs. Webster. The Giants’ CB used a “bail” technique (open back to sideline, or “zone turn”), but that’s not the issue here. As a DB in man-coverage, you can’t put your eyes in the backfield as Webster did. Too easy to lose the WR, put yourself in a trail-position and then panic when the ball sails over your head. Remember, the "little things" win in the secondary.

The slant route: This was open all night for the Cowboys offense. And when Romo and Dallas needed to make a play to ice the game, we saw the slant again—this time vs. off-man coverage. In Cover 1 (man-free), CBs are taught to play with an outside shade. However, when you recognize a slant alignment (pre-snap split outside or on the bottom of the numbers), tighten down to a head up position to give yourself a chance.

-The missed P.I. call vs. Cruz in the red zone? It was a blown call, but it is a move DBs can get away with if they "tuck" the arm of the WR instead of pulling on the jersey.

- I'm not surprsied that Giants' rookie RB David Wilson didn't see the field again on offense after putting the ball on the ground. Can't turn the ball over in this league as a rook and expect to keep getting carries.