Did Redskins' Haslett make the right call in the final minutes?

Did Redskins’ defensive coordinator Jim Haslett make the right call last night in the final minutes down in Dallas sending pressure at QB Tony Romo? I want to break this down, discuss some other options and get into the Xs and Os of a crucial situation in the Cowboys’ 18-16 Monday night win.

A quick set up: 3rd and 21, protecting a two point lead with Dallas in their 2-minute offense. What do we see? Cover 0 (blitz-man with no safety help) with eight-man pressure. Here are my thoughts on the call… 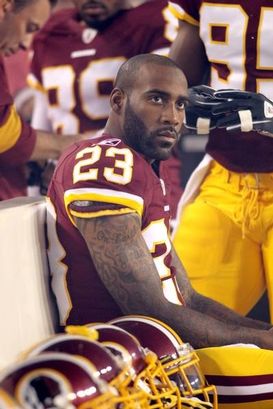 ICONHall had some comments after the Redskins' loss, but he still has to find a way to cover Dez Bryant on third down.

- I understand the negative comments after the game from Redskins’ CB DeAngelo Hall. Playing blitz-man, you expect the ball to come out—quickly. That’s why you play with an inside shade, take away inside breaking routes (slant, skinny post, option) and use a flat-foot read in an off-man position. However, you still have to cover in the NFL when the QB can extend the play. It doesn’t always play out like it is drawn up on the chalkboard.

- What are the other options? You could play some Cover 2 or even go with 2- Man (man-under with deep help). That is the easy call here. Rush four (or even three) and force Tony Romo to dump the ball off underneath or hit the check down. However, even when you take away vertical route schemes, you are allowing the Cowboys to set up a very manageable fourth down situation that gives them the entire playbook to work with.

- Use 5-man pressure with zone concepts in the secondary. Think of a basic zone blitz where you rush five and drop six into coverage. Three-deep, three-under (think Cover 3) where you still have a top on the defense, plus a free safety in the deep middle of the field. A “safe” call that brings some pressure—and protects you in the backend.

- Play combination man. Similar to when I broke down Cover 7 here on the chalkboard, this defense allows you to “take away” certain receivers on the field. You can “double” a player such as Dez Bryant on the outside, play a 2-Man look over the top of No.1 or move inside and run a “slice” call (in and out) over the slot. Bottom line here, it gives you some options to play with in the secondary.

Did I like the call? Looking back (which is very easy to do the day after), I don’t have any issues with it. Haslett is a pressure-based coach and he wanted to end the game. The Redskins did a poor job on their contain rush principles on the edge of the defense (which allowed Romo and Bryant to buy time), but I want to play for a coach that trusts his secondary when the game is one the line.