Do the 49ers have the top safety combo in the NFL?

It’s no secret that I focus on DB play when watching tape. I look at footwork, range, eyes, tackling and angles. The key techniques you need to be a productive player in the secondary. 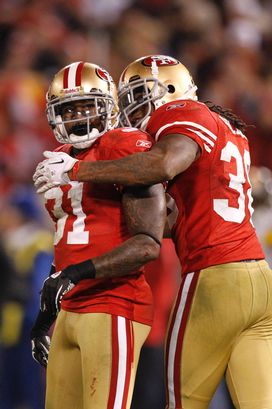 US PRESSWIREAre Whitner and Goldson the No.1 safety combo in the league? That's how I see it.

And in today’s NFL, you better have two safeties in the backend that can get off the numbers in Cover 2, play the deep middle of the field, walk down over a slot, get hands on a TE and tackle in the open field.

That’s why I have no problem calling 49ers’ safeties Donte Whitner and Dashon Goldson the best combo I’ve studied on tape.

I played with Whitner Buffalo during the 2006 season when the Bills drafted the safety out of Ohio State. No question he had the physical tools, but just like any rookie, he was needed time to develop those raw skills.

Look at the Niners’ SS now. Whitner can play Cover 2 (or 2-Man), break off the numbers on the 9 (fade) or 7 (corner), make plays in the run game, carry No.2 vertical in a zone blitz scheme and light up WRs inside of the numbers.

With Goldson, I love his range, athletic ability, length and quick reaction based off his run/pass keys. You won’t see much wasted movement with the Niners’ FS. He plays a clean game and takes solid angles from the deep middle of the field to the football.

Go back to the matchup vs. Lions. What did we see from San Fran against WR Calvin Johnson? 2-Man and Cover 2. Two coverages that are hot right now in the league to limit top tier WRs in the vertical route tree.

However, Goldson showed the ability to play the run from 15-yards off the line of scrimmage. How? Read the release of No.1, get your eyes back inside, take the proper angle to the ball and wrap up (a lost art) in the open field.

But let’s get away from scheme for a minute here, because the main reason these two safeties on the west coast stand out from my perspective is the physical brand of football they bring to the stadium. They hit. And they hit with power. Both Whitner and Goldson bring their pads and legs on contact.

And when you put that on tape every Sunday, opposing WRs won’t want to catch the ball. Running the deep dig (square-in) or the 3-step slant doesn’t look so appealing when you watch this combo at safety come downhill on the ball. Find me a wide out that is looking forward to that.

It wouldn’t be fair if I didn’t mention Seattle’s Kam Chancellor of Earl Thomas in this discussion—because they can play some football too. No question about that. But after watching the tape, Whitner and Goldson are my No.1. That's how I see it.