We left on a Thursday. A mild January afternoon with occasional episodes of sun. Mostly clouds.

An early practice at Redskins Park followed by a short window of time to run to the house, grab a suit, some toothpaste, an overnight bag and head back to the team bus for the ride over to Dulles International Airport. 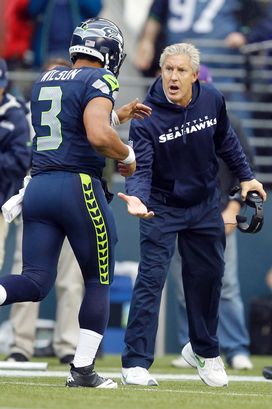 US PRESSWIRECarroll and the Seahawks have a long trip to D.C. for the NFC Wild Card game vs. the Redskins this Sunday.

After a five game run to get into the dance, we knocked off Jon Gruden’s Bucs 17-10 in Tampa to win the Wild Card the previous weekend. Up next, a trip to Seattle for the Divisional playoffs. Holmgren, Hasselbeck, Alexander and the Seahawks. The afternoon kickoff on a Saturday.

NFL road trips are really business trips. That’s the truth. You don’t have time to hit up the nightlife in town. This isn’t the NBA or MLB. No clubs or bars or late nights. Teams usually leave the afternoon before the game, check into the hotel, grab a nice dinner in town (players love to find a solid steak house the night before), sit through a meeting or two and go to bed.

Wake up, hit the pre-game meal, play the ball game and head back to the airport or the train station as we did for the trips to Philly and New York.

Boring? Yeah, it’s not as cool as you would think. And you usually sit on the plane for at least an hour while the gear in loaded.

However, when you travel across the country as we did early in 2006 to play the Seahawks, the routine is flipped a bit. We left two days before the game that season. Smart with a five-hour flight all the way up to Seattle (with choppy weather on tap for the ride).

And our owner, Mr. Snyder, took care of us.

We chartered a double-decker plane, Morton’s catered the meals and the veterans relaxed in style up in first-class seats on the way to Seattle. Guys watched movies on laptops and DVD players (remember, there were no iPhones or iPads back in ’06), played cards, dominoes, etc. With PSP (the portable Play Stations) the new thing for NFL team flights, there were plenty of matchups over the skies of the Midwest in Madden football (I always played with Vick and the Falcons if you are curious).

That was a long plane flight and we were all exhausted when we touched down in the darkness of Seattle (after pushing through the rain). I was tired, dehydrated and wanted to go to bed.

We checked into the hotel, had dinner, were given a curfew (one that guys don’t break because of the ridiculous fine attached to it) and shut it down for the day.

On Friday (think Saturday in a standard NFL work week), we had meetings at the hotel, attempted to get adjusted to the time change on the west coast and went through our walk-thru session at the airport in one of those private hangers off the runway.

That’s right. Get on the bus, take in the scenery of Seattle on a wet morning and go back to the airport—for practice.

On cold cement we went through the game plan in shorts and jerseys (no helmets the day before a game). Offense, defense, special teams, etc.

That was a great coaching staff under Joe Gibbs. It didn’t matter if we had practiced on the street that day (in traffic). Gibbs, Gregg Williams and special teams coach Danny Smith had us prepared to play.

We were sharp going through adjustments, our checks and so on. The session was fast and there weren’t many questions. You get to this point of the season with a shot at advancing to the NFC Championship game there is really no excuse to walk into a game unprepared.

The rest of the day played out as it would on a road trip to Philly or Dallas: nap, dinner, team meeting, position meeting, bed.

Again, nothing to see here.

Did we win on Saturday in Seattle? Nah. That was the day our season ended with a 20-10 loss to the Seahawks in one of the loudest environments I’ve ever been in as a player or as a fan. That place was rocking.

The Seahawks went on to win the NFC Championship and eventually lost to the Steelers in the Super Bowl.

For Pete Carroll’s team flying east this weekend to play RG3 and the Redskins, their routine will change a bit. I’m sure they will leave on Friday, stay downtown D.C. and find a spot to have their walk-thru on Saturday.

But regardless of the time change or the long flight, the game on Sunday will still come down to execution for both the Seahawks and the Redskins. Pro ball players are always ready for change and adjust quickly when their routines are flipped. They are programmed that way.

Maybe the long flight will be discussed if the Seahawks get off to a slow start on Sunday. But that's just talk. It really is. Carroll's club has already put in some flight hours this season. And if they treat this game like a business trip (as I expect they will), the flight across the country into D.C. won't impact them at all.