Don't forget about the Saints

The 9-2 Falcons and the 8-3 Bears are receiving most of the NFC hype—justifiable hype—after their big wins on Sunday. But, where does that leave Sean Payton and the Saints? New Orleans is an 8-3 ball club—and I think we often look past them.

In fact, we find ways to break them down. Go back to Thanksgiving. The Saints blow an early lead and need a magical strip from Malcolm Jenkins, plus a late TD drive from Drew Brees, to get past the Cowboys. And we all started to hear the comments: couldn’t close out Dallas, the defense gave up too many plays, Reggie Bush didn’t play to his abilities in his return to the lineup, etc., etc. 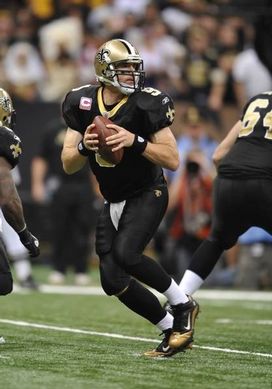 ICONBrees and the Saints are still one of the top teams in the NFC--despite the lack of hype.

That’s all true, but they are the team that got on that plane with a win. They found a way to beat a Dallas team that played their best football—something that New Orleans has to prepare for every week.

I never played on a Super Bowl team in my career, but I can tell you that we got up to play the champs if they were on the schedule the following season. We practiced harder and we studied longer. Do whatever it takes to get a win against the players with the fresh new rings. That’s how it works and it doesn’t stop there. The rest of the league spends the offseason studying the champs. That’s what you do. Breakdown, analyze and dissect the champ’s tape in the spring. See what they do scheme wise, steal techniques and, of course, find a way to take them down. The two things that every player and coach does in the offseason is watch tape of their divisional opponents and of the Super Bowl champions. That is pretty standard across the NFL.

Yet, as we are about to head into December football in the NFL, and the Saints are still here. I will be the first to admit that the offense has looked sluggish at times in the 2010 season. Gregg Williams has had a hard time limiting the production in the run game with his defense, and the turnovers aren’t coming on a regular basis like we saw last season. However, the Saints are still one of the toughest teams to prepare for from a scheme perspective on both sides of the ball. Complex, with multiple alignments, personnel groupings and formations.

The numbers, the stat line and the amount of points scored aren’t going to reflect the 2009 season. We should all understand that, but with the amount of talent they have on both sides of the ball, there is no reason to forget about the Saints—because they can still make some noise in the post season.

We can all see that the NFC is starting to separate, The good teams, the legit teams, such as Atlanta, Chicago, Philly, Green Bay and New York all have a realistic shot to put a run together and end up in Dallas playing for the Lombardi Trophy. But, don’t leave out New Orleans, because I have a hard time believing they aren’t near the top of that list.