Let’s run through my notes from the Eagles-Patriots matchup on a night where New England sat Tom Brady and Philly lost Michael Vick early to a rib injury. 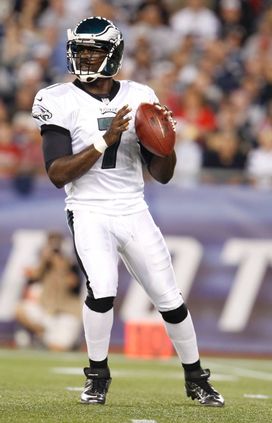 US PRESSWIREEagles QB Vick left the game early tonight with a rib injury.

Vick’s injury: Plenty of talk already tonight after the Eagles QB went down with a rib injury that he has to get rid of the ball and play a smarter game at the QB position. That sounds good—and Vick does have issues staying healthy—but is he really going to change his approach to the game? Think about it: Vick’s skill set is what causes defenses to adjust their game plans, coverages and schemes. His ability to extend plays, break contain and allow WRs time to convert routes is a plus for the Eagles. Is there some risk here? Can he make some quicker decision in the pocket? No question, but is playing with a conservative style the answer here?

Patriots’ screen game: Find me a team in the NFL that utilizes the screen game more than the Patriots. Maybe we can throw the Saints into the discussion, but with Josh McDaniels back in New England, this is a major package for this offense. The RB “shoot” screen, WR “Bubble” and “Tunnel” screen, etc. And these screens are run in every down and distance situation. That’s tough on a D-Line (like the Eagles) that wants to get up the field with speed.

Foles: The rookie QB out of Arizona looks comfortable in Andy Reid’s offense. In this scheme, the QB is going to target receivers in the middle of the field (Hi-Lo, Spot, Spacing, etc.). Basic idea here: throw the ball between the numbers and the hash. Foles was productive and despite the interception at the end of the half vs. Cover 2, he played some good football. There were a lot of positives the rookie put on tape tonight.

McCoy’s footwork: Watching the Eagles’ RB its hard not to be impressed with his lateral ability. Look at the footwork in the hole, on the edge of the defense or in the open field. McCoy has a unique ability to break down defenders at the point of attack, change direction and then get vertical. You can’t hesitate on McCoy when you square your feet to make the tackle. He’s just too talented for that.

Mallett: I like seeing the Patriots’ QB stand in the pocket vs. pressure. This New England O-Line has some issues up front, but we saw Mallett step into throws with pressure in his face. He did caught throwing the out/comeback vs. Rodgers-Cromartie and he will have more corrections to make based off the film. However, this was good work for Mallett. He put a scoring drive together, threw the “Pin” route (Dig-Option combo) in the red zone and displayed some arm strength on outside breaking routes.

“Pump-7” vs. Cover 2: Let’s go back to Foles’ INT. The “Pump-7” (WR stem to post, break to corner) shows up quite a bit in the high red zone (20-35 yard line). However, if you are going to throw it vs. Cover 2, you have to read the CB and the safety. If the CB sinks (and cushions the 7), the safety can stay square in his drop, open his hips on the 7 cut and drive to the ball. Have to sell the safety if you are going to make this throw.

Eagles' Sprint Action: Quick point here on the Philly goal line concept—because I saw the same play from the Eagles back in my career. Align a WR in the backfield, use motion and run the “Spot” (7-Curl-Flat) off of sprint action. And if you are playing Cover 1 (man-free), CBs can panic when the WR is aligned out of position.