Expect to see the 'Curl-Flat' route this weekend

Click here for my breakdown on the NFL route tree.

The first weekend of the NFL preseason can be described as an extension of what you see on the practice field in camp. Teams don’t game plan, scout opponents or watch hours of tape to prep for an exhibition game. Instead, these games are all about running your base schemes, technique, footwork, etc.

Think basic concepts in the passing game and core coverages (Cover 1, Cover 2, Cover 3) on the defensive side of the ball. And one route that we should expect to see throughout the weekend is the Curl-Flat. Let’s break it down… 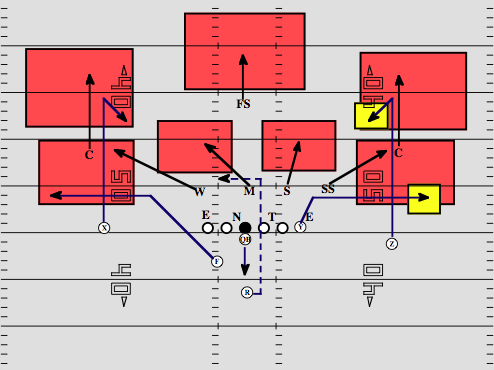 A couple of quick coaching points…

- A base breakdown of Cover 3: 3-deep, 4-under zone shell with the SS walking down to the closed (strong) side of the formation in a 3x5 alignment. Create an 8-Man front with two “curl to flat” zone droppers (SS, W) and the protection of the 3-deep alignment in the secondary.

- The technique of the “curl to flat” zone players: drop at a 45-degree angle to a depth of 10-12 yards, hold off the curl and drive to the flat. The key? Both the SS and Will are "contain" players on any route underneath, so they have to come off the curl to play the flat.

- I have both CBs playing off from an outside leverage position (can “bail” from press-look at the line of scrimmage). They will drive the curl.

- The route stem vs. a CB in an off-position: vertical release, push the CB up the field (force him to open his hips) and break between a depth of 12-15 yards with a clean, sharp angle back to the ball.

- Two options for the QB based off his read of the underneath “curl to flat” droppers. If the SS or Will hang on the curl, throw the flat. If they are quick to jump on the flat route, then target the curl. Simple high to low read with the check down (R) as a final option.