During the 49ers’ win over the Lions on Sunday night, Jim Harbaugh’s offense ran the “Smash-7” concept in the first drive to put points on board. Use motion to create a 2x2 alignment and target TE Vernon Davis on the 7 cut (corner route). Today, let’s use the “All-22” coaches tape to breakdown the route scheme vs. Cover 1 and get into some coaching points. 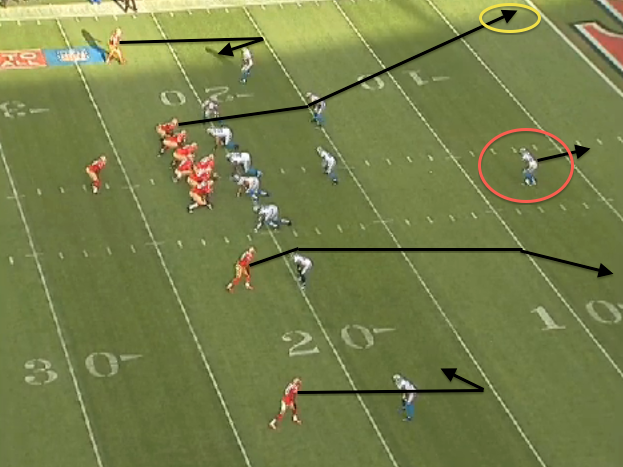 The 49ers use “waste motion” (FB motion from core of the formation to a No.1 alignment). A quick tip: he’s not getting the ball. You will see this often vs. Cover 2 or Cover 4 defenses to widen the CB and create a matchup with No.2 down the seam. Here, San Fran creates a 2x2 alignment to target Davis on the 7 route to the closed (strong) side of the formation. To the open (weak) side, with the slot WR on the ball (“Exchange") this should be an automatic alert in the secondary for the “Smash-7” concept. 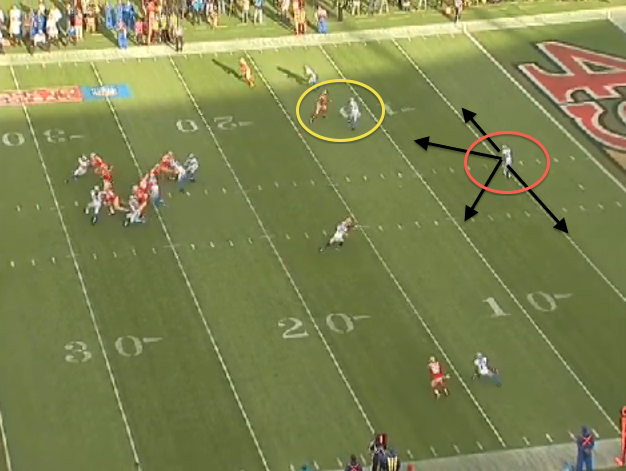 I wanted to focus on the FS in the middle of the field (highlighted in red) and his angles to the ball. The single high safety will help on the post, the inside vertical seam and the deep dig (square-in). But look at the ground he has to cover to make a play on the ball vs. the 7 cut. It doesn’t matter how much range your FS has, because unless he breaks before the throw he won’t get there vs. a deep outside breaking concept. 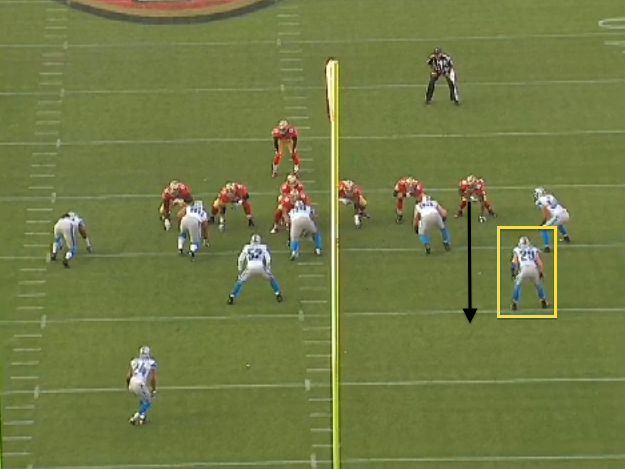 Nothing wrong with the initial alignment from Wendling over Davis. Sure, he could walk up, bump the Sam Backer outside and play from a press-man position. However, he is playing off with an outside shade. Exactly how you are coached in Cover 1. 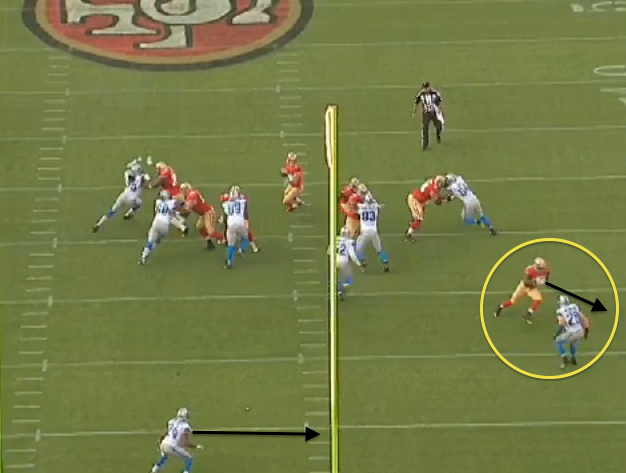 Welding gets in trouble when he has to transition on the break from Davis. We already know the FS isn’t going to help on the 7, but look at the hips of the Lions’ SS. If you are playing off-man, “weave” in your pedal at the release to maintain that outside shade, open your hips to the receiver when breaks your cushion (distance between DB and WR) and stay “in-phase” (close on the hip). Here, Wendling “opens the gate” to the QB and now has to turn and run vs. the speed of Davis. There’s no question the 49ers have the matchup advantage due to the skill set of the TE, but technique will always give you a chance as a DB. This is too easy for QB Alex Smith, Davis and the 49ers’ offense.