When you take a look at the Cover 2 defense, the technique of the CBs is key to seeing success within the scheme: jam, re-route, sink and read the QB. Today, let’s go back to the Rams-Bears matchup using the "All-22" film and break down some coaching points on CB Tim Jennings’ INT vs. Sam Bradford. 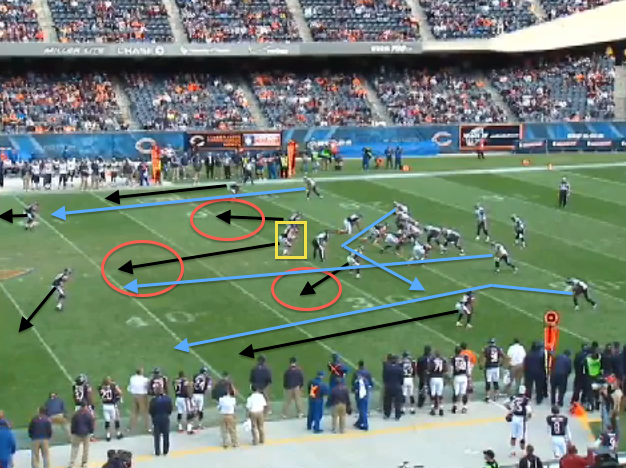 - Start with the depth of safeties Chris Conte and Major Wright. At the snap, both are playing between 15-18 yards off the ball. No disguise here. Line up, drop to your landmark (top of the numbers), keep everything in front of you and read the QB.

-Underneath, the Bears have to two “Seam-Hook” defenders (Nickel, Sam) with Mike Backer, Brian Urlacher (highlighted in yellow), opening to the passing strength (two receiver side) and running the “inside vertical seam.”

- Both CBs, Tim Jennings and Charles Tillman, will force an inside release and sink with No.1 until they are threatened in the flat.

-The Rams route scheme: Middle Read (converts to Verticals vs. Cover 2). Run two verticals at Conte to the open side of the formation with the TE releasing late on an underneath crossing route. The QB will look to target the inside slot receiver vs. Urlacher or work the 9 (fade) route on the outside. 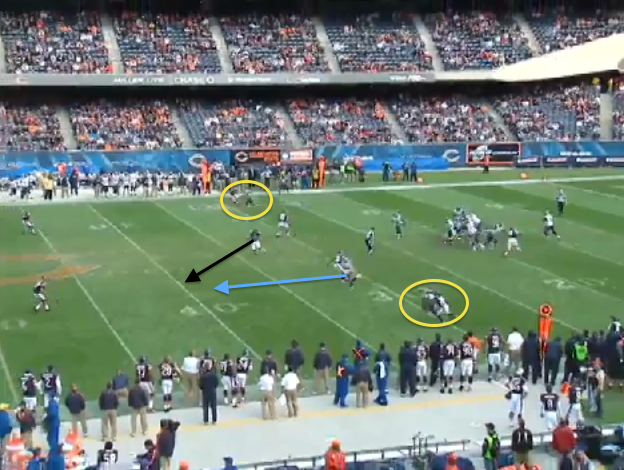 - Focus on the CBs. Both Tillman and Jennings force the No.1 WRs to release inside. This is key from a scheme perspective. An outside release will widen the safeties off of their landmarks and open up the middle of the field. By forcing an inside release, Conte can “play two” and drive on the QB’s throw.

- Urlacher will “match” and carry No.2 up the seam with both Tillman and Jennings “trailing” the outside verticals with no threat in the flat. This allows the CBs to cushion a possible 7 (corner) route and to play underneath the 9 route.

- Look at the depth of Conte. He has enough cushion vs. both vertical concepts to take an angle that puts him in a position to make a play on the ball. That goes back to his initial depth at the snap of the ball. Here, Conte is square is his pedal and can read the QB.

- With no immediate threat in the open side flat, Jennings can continue to “trail” the 9 route (plays almost like 2-Man). Inside, Urlacher is in a position to drive on a throw to No.2 up the seam. 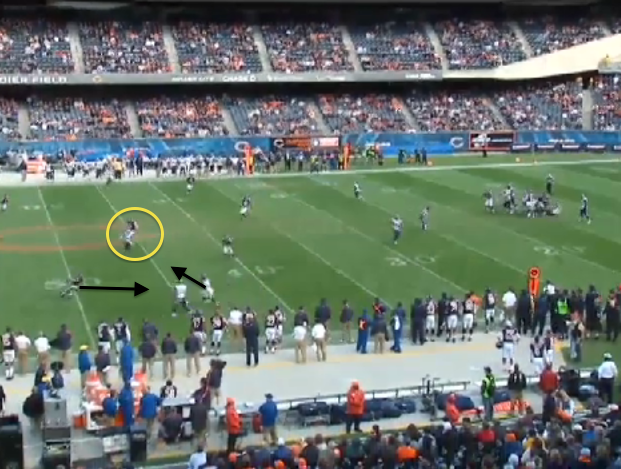 - Because of the initial alignment, the technique and the Bears playing within the Cover 2 scheme, Conte is able to read the QB and break downhill on the throw with Jennings cutting underneath the No.1 WR to make the play on the ball. 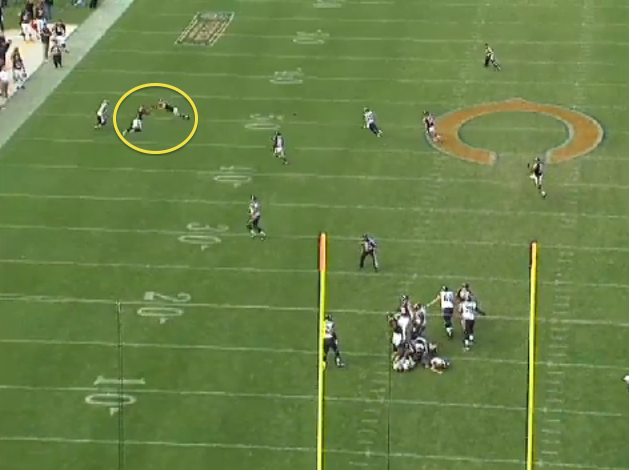 - Looking at the view from the end zone camera, we can see that both Conte and Jennings are in a position to make the play. Exactly how it is drawn up on the chalkboard vs. an outside vertical route when the safety plays with depth and the CB executes the techniques of the scheme.