Let’s go back to Kansas City’s 27-24 OT win over New Orleans from this past Sunday and breakdown Stanford Routt’s INT vs. Drew Brees. A good opportunity to talk route scheme and man-coverage technique.

Take a look at the breakdowns from the “All-22” film and then we will get into some coaching points. 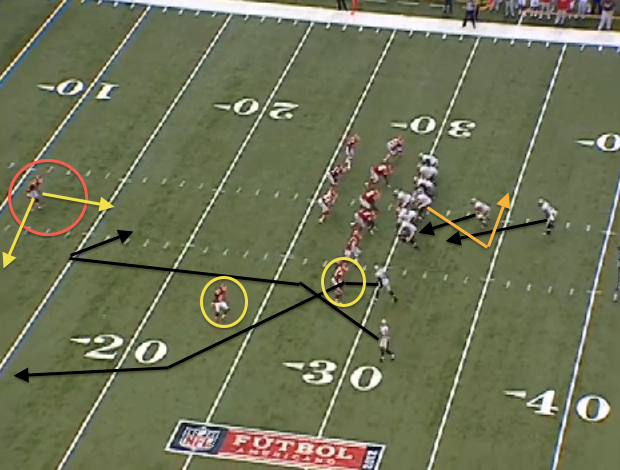 - “Dash” action from Brees off the open side run fake. The QB will use a half-roll (or “Dash”) and look back to the play pass side. This is also called a “Dash Throwback.” And with the Saints using max-protection (eight-man protection), this is only a two-man route scheme.

- The Saints are running a “Switch’ concept (a concept you will see in the Giants’ playbook). The No.1 WR to the open side, Lance Moore will take a hard inside release, stem his route vertically up the field and break back to the QB on the curl route (can also see a dig route from No.1). The slot receiver (aligned on the ball in an “Exchange” look) will work to get off press-coverage and run the “Wheel” route up the numbers.

- Focus on the two CBs here for the Chiefs. Whenever there is a possibility of a “stack” look or a “pick route,” you must have your DBs play at different levels. In this situation, Routt is aligned over Henderson is a press-look with Brandon Flowers playing off. Avoid a pick or rub situation and play man-free with the FS in the deep middle of the field. That’s smart football. 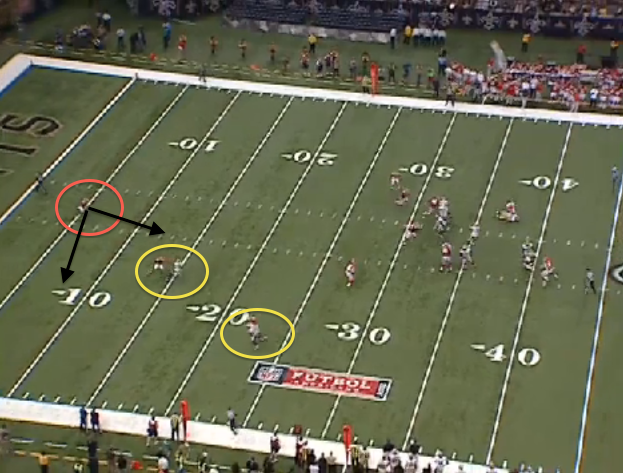 - In Cover 1, the CBs are coached up to use their FS help. Play with an outside shade and funnel the WRs to your help in the middle of the field. As you can see on the film cut up, the Chiefs’ FS is in a position to drive downhill on the inside curl route and help (late) on the “wheel.” That’s a long way to go in order to get over the top of the “Wheel.”

- Focus on Routt and his positioning vs. Henderson. To effectively play the “Wheel” route, you want to coach your DBs to drive to the inside hip of the WR and carry the route vertically up the field. Pin him to the sideline if you can and eliminate the space to work outside of the numbers. 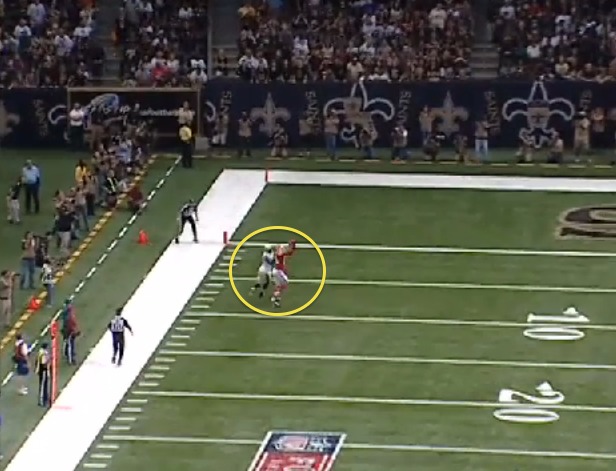 -The biggest mistake you will see from DBs is when they look back in at the QB too soon. That will cause separation throughout the route stem and force DBs to panic down the field (P.I. call). Remember, the QB isn’t throwing the ball to you. Get “in-phase” with the WR (on the hip) before you look for the football.

- This pass has to be thrown to the up field shoulder of Henderson (away from the defender). However, Brees leaves this ball to the inside. And with Routt on the inside hip of the WR (“in-phase”) he can get his eyes back to the QB and play the ball at the highest point. A big play that led to the Chiefs’ comeback win.