Film Study: It's all about 'eye discipline' vs. RG3

Poor eye discipline. That’s the No.1 reason defenses get beat at any level of football. If you don’t read your keys, or “keep your eyes on your work,” then expect to give up explosive gains vs. play action. That’s what I’m seeing on the tape right now when watching LBs and DBs vs. Robert Griffin III. But is it scheme based? Or are NFL defenses so focused on the rookie QB and his abilities that they are ignoring basic run-pass keys? 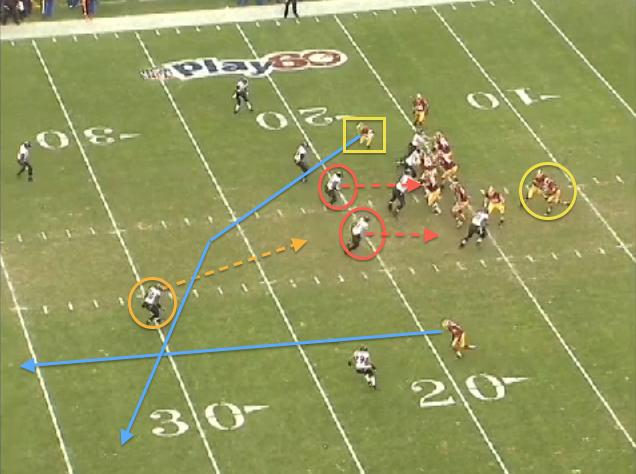 Open (weak) side play action out of the Pistol from RG3 and the ‘Skins. Ride RB Albert Morris through the mesh point and suck the LBs (red) to the line of scrimmage. With safety Ed Reed (orange) looking into the backfield (instead of reading No.1 on the vertical release), he has to open and run to recover in the deep half vs. the 9 (fade) route. 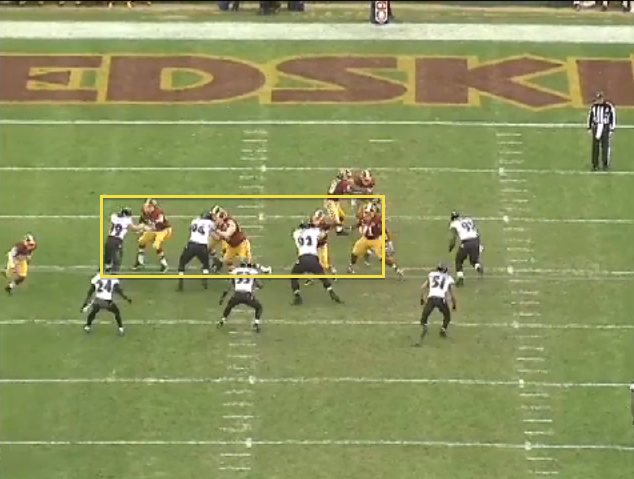 End zone view of the O-Line. This is a “High-Hat” read and should tell the LBs to play pass. Look at the LT (open side tackle). Instead of firing out, or blocking down, he is standing straight up. 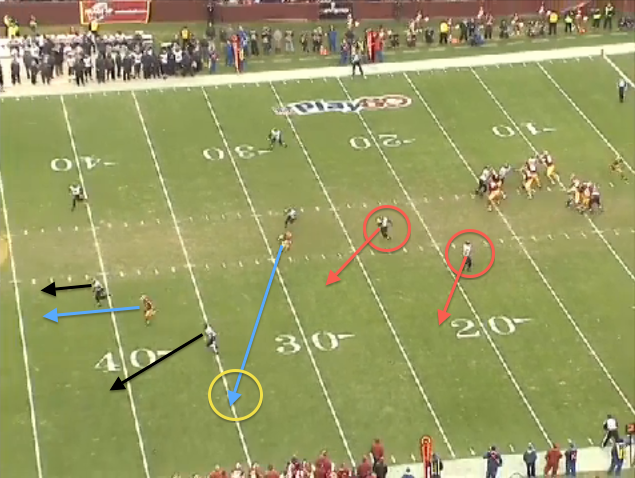 With no underneath seam-hook player in Cover 2 (LB) because of the poor run/pass read (and the CB trailing No.1), there is a clear, easy window for RG3 to target WR Santana Moss on the deep crossing route. 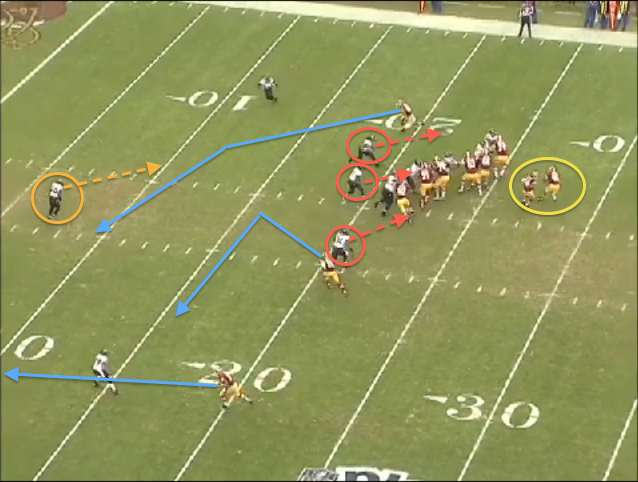 The Same boot action we see around the NFL with Posse personnel (3WR-1TE-1RB) on the field in a Pistol alignment. Use the run action to the closed (strong) side of the formation with No.2 to the open side (slot WR) as the flat read. Again, look at the LBs and the FS in the middle of the field: eyes in the backfield. 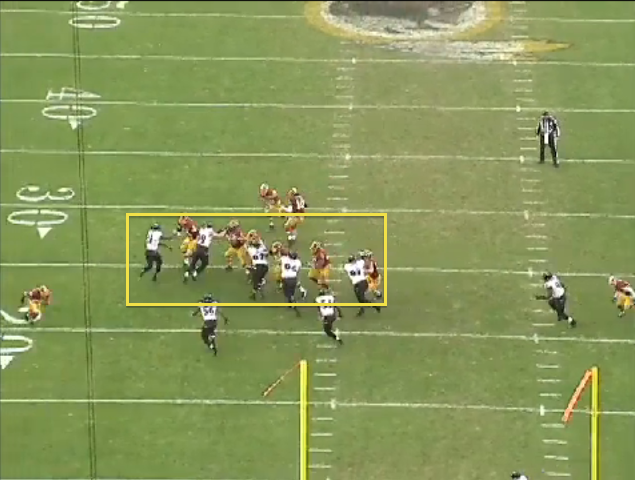 NFL secondary coaches call this “Elephants Marching” when breaking down the O-Line in the boot game. Stand straight up, turn and march in a row to the sidelines. Another “High-Hat” read. 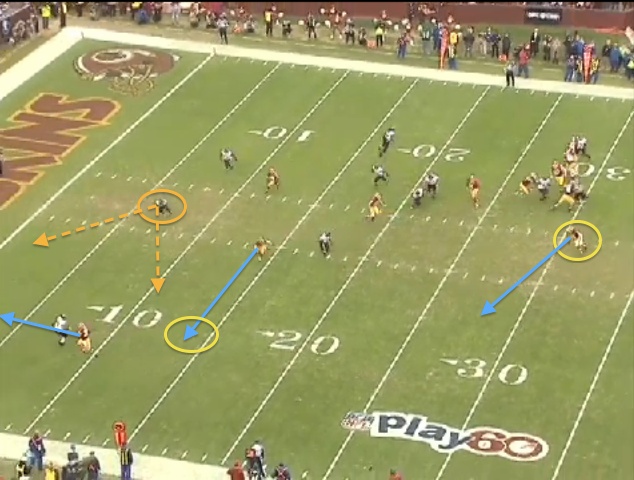 Look at the space Griffin has to work with here on the open side edge. With the underneath defenders trying to recover after (attacking downhill on the false run key) Griffin can target a wide open Josh Morgan in the flat. 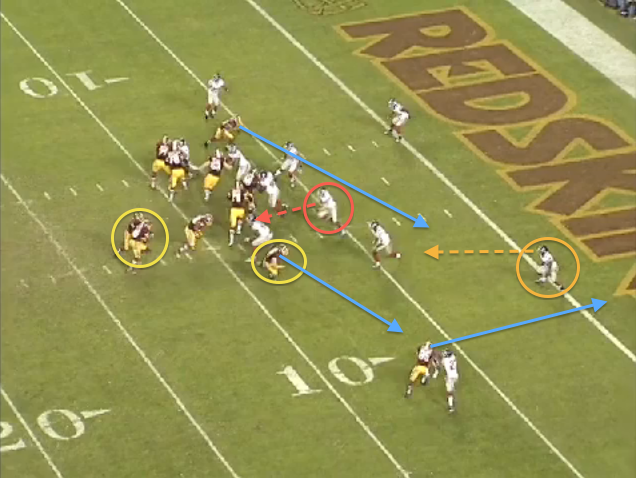 The Redskins want to show the Read Option and sprint/dash RG3 to the closed side edge vs. Cover 2. With the Mike Backer taking the bait and the SS staring down RG3 on the play fake (frozen in his stance), the QB can target Garcon coming back across the formation. 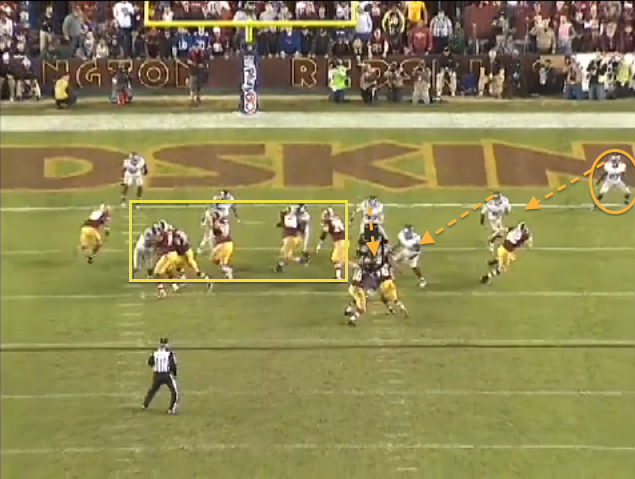 Same story here with the “High-Hat” read on the O-Line. The LT is setting to block the edge with the rest of the O-Line turning away from the run action. And as you can see on the cut-up, the Mike Backer, Sam Backer and SS all have their eyes on RG3 instead of their run/pass keys. 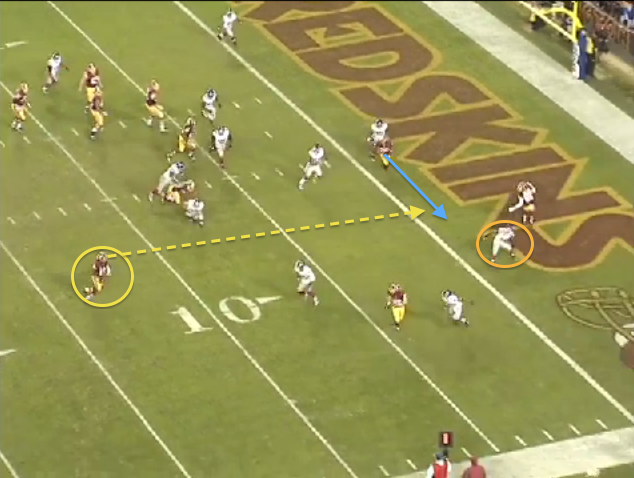 With Griffin now outside of the pockethe can look to No.1 vs. the deep half safety trying to recover or Garcon. RG3 decides to throw this ball to Garcon on the crossing route and the result is the game winning TD vs. the Giants on Monday night.

“Where are your eyes?”

Griffin is a unique athlete and he has taken over the league this season with his play making ability. And when you don’t read your keys (or trust what you see as a defender), it creates even more opportunities for the rookie QB to fill up the box score.