Film Study: Kaepernick vs. the Patriots

Let’s take an All-22 look at the Colin Kaepernick’s TD pass to Delanie Walker in the 49ers’ 41-34 win over the Patriots on Sunday night. A good opportunity to focus on personnel, alignment, and route scheme vs. Cover 3. Check out the All-22 cut-ups and then we will get into some coaching points, plus the “fear" Randy Moss still puts in opposing secondaries. 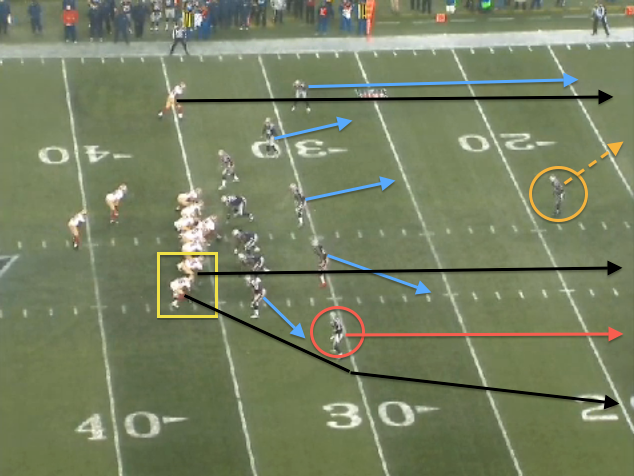 - Jim Harbaugh’s club is going to shift and use pre-snap motion out of a variety of personnel groupings. Here, the Niners come out with a “Diamond” alignment in the backfield and “move” to a Big Wing set (yellow). Sure, there is some window dressing at play here, but this is all about creating matchups within the 49ers’ game plan.

- Why the Big Wing alignment? Put stress on the closed (strong) side CB (Alphonzo Dennard). In Cover 3 (3-deep, 4-under), the CB is coached to play with an outside 1/3 technique and split two vertical concepts. Dennard has to “bail” (open hips, zone turn), gain depth and put himself in a position to play over the top of both Walker and Vernon Davis.

- The FS is coached to split the formation and play with enough depth to overlap the 9 route to the open (weak) side (Randy Moss) and drive the inside vertical to the closed side (Davis). 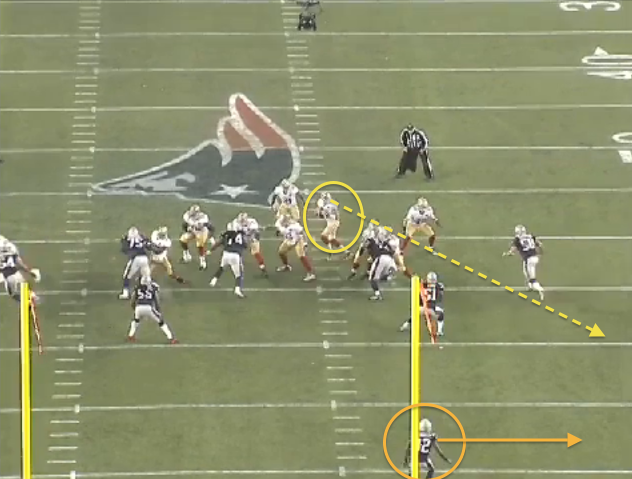 -Check out Kaepernick’s eyes at the snap. By looking to Moss on the 9 route, the FS (Devin McCourty) opens the hips and leans to the weak side of the formation. Instead of staying square, gaining depth in his backpedal and driving on the throw, McCourty is impacted by the deep ball speed on Moss. I understand Moss can still run and attack the top of the secondary, but you can’t leave the middle of the field.

- With the FS now removed from the middle of the field, the 49ers have the matchup they want: a 2-on-1 vs. Dennard to the closed side of the formation. Davis will stem his route vertically up the field (between the numbers and hash marks) with Walker getting outside of the numbers. For Dennard, he has to climb down the field with speed and read through the QB. 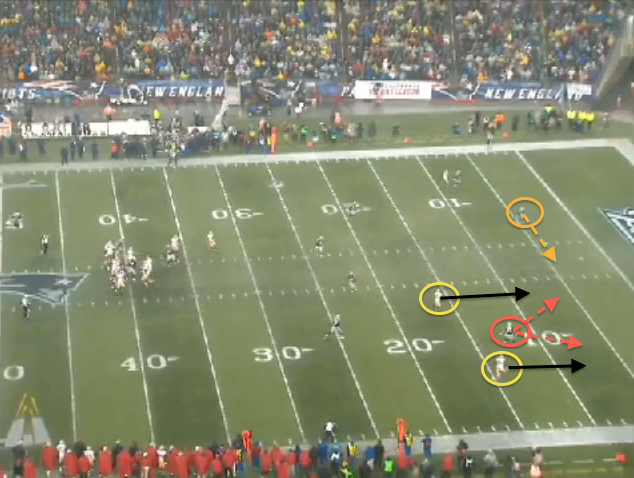 - This is a tough spot for Dennard. The CB has to drive to Davis or use a “closed angle technique” (head whip or baseball turn) to play the outside vertical to Walker. And with no help in the middle of the field, Kaepernick has two vertical options vs. zone coverage. 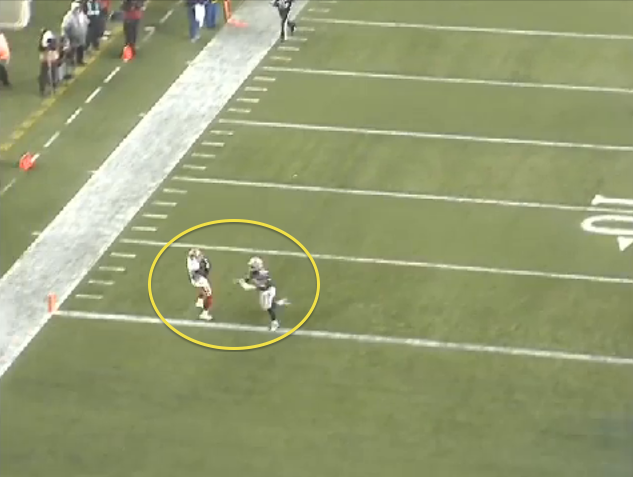 - The 49ers’ used their two tight end personnel to run vertical concepts vs. a 3-deep look. This isn’t new to the NFL. However, when you force the CB to open and run (based on offensive alignment) and move the FS out of the middle of the field, you can target the top of the defense. Smart call from Harbaugh’s club given the field position (strike zone: 20-35 yard line) plus solid execution from Kaepernick.