With the Bears in their two-deep shell, Wilson will ride the RB through the mesh point and read the end man on the line of scrimmage (DE Israel Idonije). No different than running the veer option, the Seahawks use an “arc” release (outside, vertical relase) from the TE (work to the second level) and option Idonije. 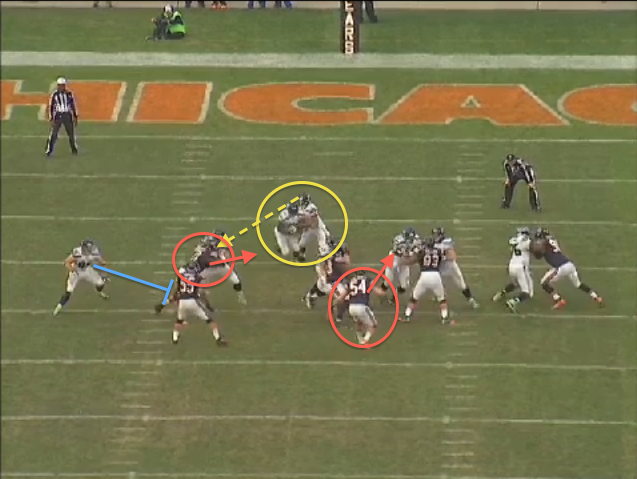 One of the main issues for the Bears is the stunt they have called up front on the D-Line. Both Idonije and the 3 Technique DT slant to opposite gaps at the snap. That’s as easy read for Wilson to pull this ball, get to the edge of the defense and run the “alley” (between CB and core of the formation in Cover 2). 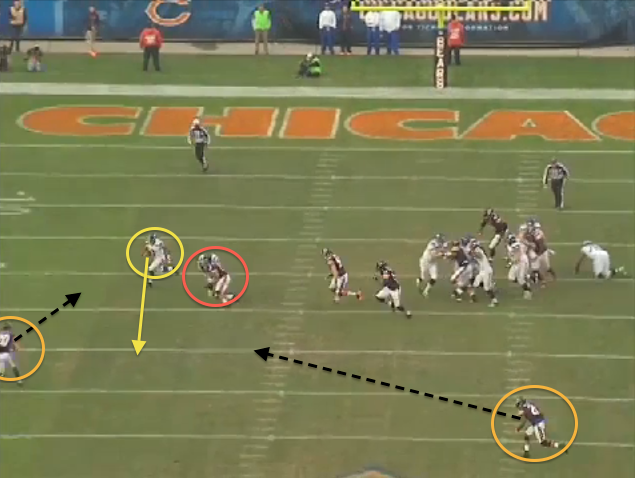 Because of the “arc” release, the TE has position to seal LB Lance Briggs and force the SS (secondary run support player) to make an open field gain after a run that moves the sticks. 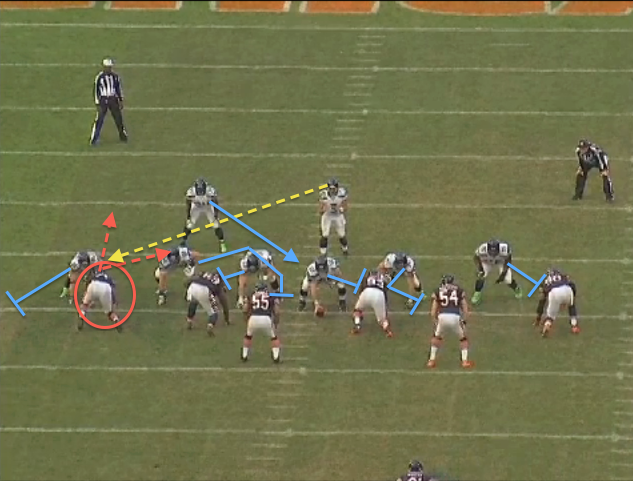 Same read for Wilson vs. Idonije. If the DE stays vertical up the field, Wilson will give the ball to RB Marshawn Lynch. But if the DE crashes down the line of scrimmage, Wilson will keep and get to the edge with the TE releasing to block the SS (force player in Cover 3). One thing to look at on this play: the inside blocking scheme. The Seahawks’ RG will block out on the 3 Technique with the RT pulling up through the hole vs. Briggs. 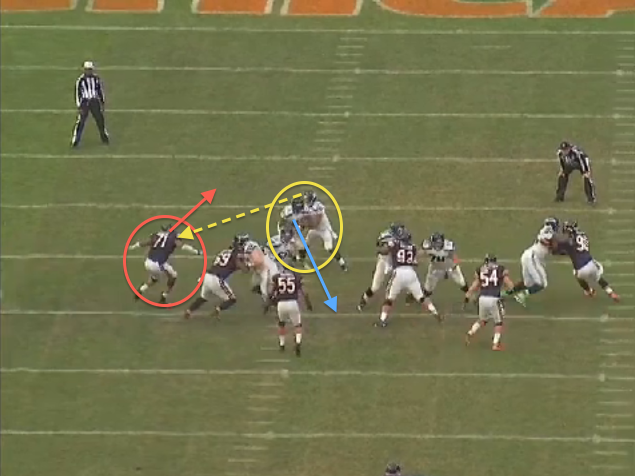 With Idonije staying up the field, Wilson will give the ball to Lynch on the downhill path. That leaves the RT to block Briggs with the open side guard working off the double team vs. the Nose and up to MLB Brian Urlacher. 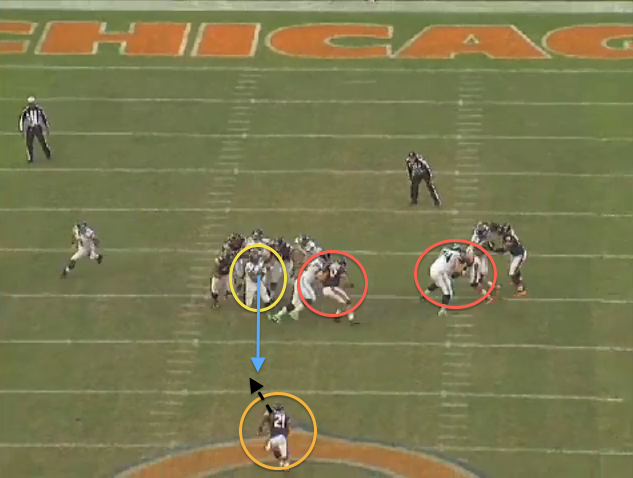 Because of the initial read from Wilson and the interior blocking scheme, Lynch can get his pads square to the line of scrimmage, press the hole and get up the field vs. safety Major Wright for a 14-yard gain. 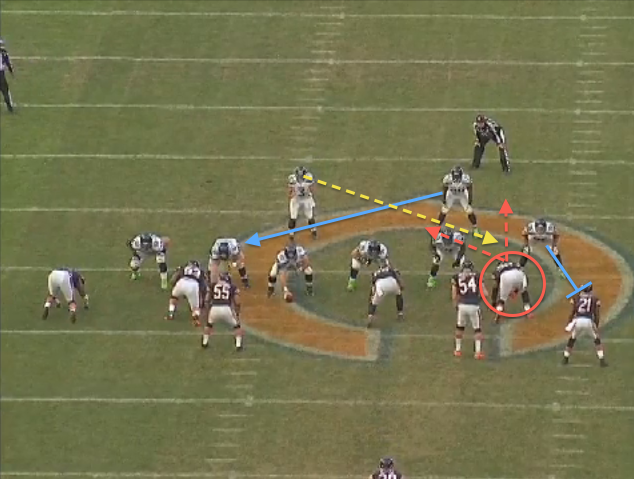 The Bears switched to Cover 1 (man-free) later in the drive and that brings Wright (SS) down into the box with Urlacher matched up vs. Lynch. Again, same read for Wilson to the opposite side of the formation vs. Julius Peppers. Ride Lynch through the mesh point and option the DE. 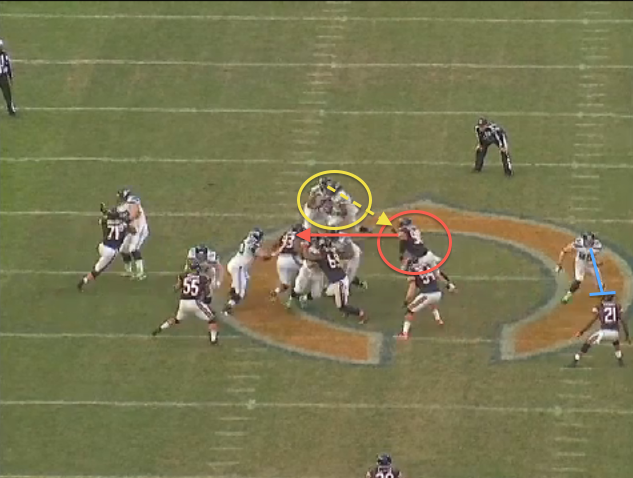 Peppers doesn’t hesitate here to crash down the line of scrimmage. A quick read for Wilson to pull this ball with a second level block from the TE vs. Wright. 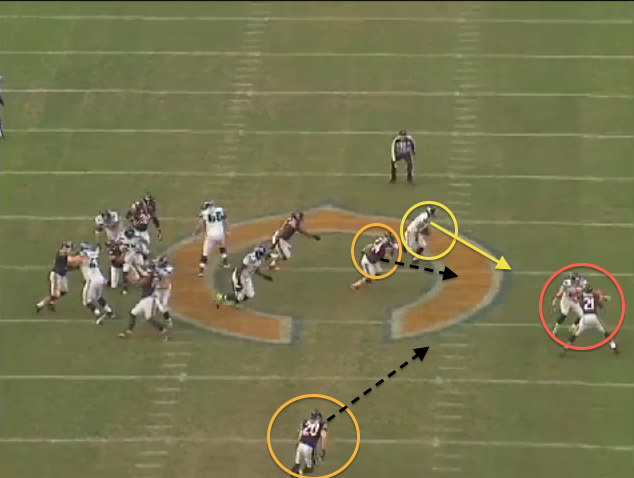 Why does Urlacher have to re-direct? In Cover 1, the Mike has to follow his coverage (Lynch). That forces the Bears LB to match to the RB before he can plant, change direction and chase down another productive play for Wilson and the Seahawks.

Why did the Bears struggle to limit the option?

The Bears did try to adjust. We saw three different defensive schemes here vs. the same read option look from the Seahawks. However, because the Seahawks used spread alignments to widen the defense (and forced the Bears to bring their nickel personnel on the field), Wilson was able to go through his option progressions while getting second level blocking. Smart play calling from Seattle that tested the eye discipline of Lovie Smith’s defense and ultimately set up the winning TD pass.