While we wait for Peyton Manning, Matt Flynn and Mario Williams to sign new deals, let’s go back and break down some of the moves (and trades) from the first day of free agency in the NFL. The Bears were active, the ‘Skins upgraded the WR position, Cortland Finnegan landed in St. Louis and more… 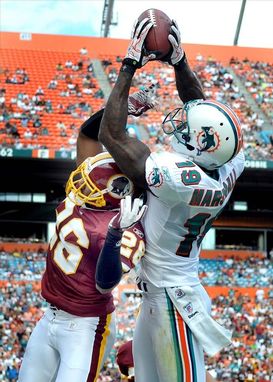 ICONMarshall is the upgrade the Bears were looking for at the WR position.

Emery, Bears make multiple moves: Impressive first day for new Bears GM Phil Emery that started with the trade for Brandon Marshall. Solid value (two 3rd round picks) and the upgrade Chicago and QB Jay Cutler needed at the WR position. A true No.1 that will force defenses to game plan differently for the Bears this season. Plus, we can’t forget about adding Jason Campbell to the roster (a No.2 QB with starting experience) and resigning CB Tim Jennings.

Reggie resigns with the Colts: I didn’t see this one coming. With all the talk of Reggie Wayne testing the market (and possibly following Peyton Manning), the veteran WR resigns with the Colts on a three-year deal. A curious move considering the amount of core players the Colts let go this week and the idea of working with a rookie QB in Andrew Luck.

$50 million for Finnegan: The Rams landed a good football player in Cortland Finnegan. He can move inside in a nickel role (which is a tough technique to play), align in both press and off man coverage and he fits in multiple schemes. But what about the $50 million dollar price tag? Reflective of the position vs. today’s NFL offenses and the Rams need to upgrade the position. I can’t question St. Louis for adding one of the top CBs on the market, but I didn’t expect the price tag to get that high.

Bucs land vertical threat in Jackson: I like the move. Sure, the Bucs paid a big price (5-years, $55.55 million with $26 million guaranteed), but with the lack of development from Tampa WRs Mike Williams and Arrelious Benn, landing the top free agent at the position should have been a priority. Plus, after the season the Bucs experienced in 2011, giving QB Josh Freeman a legit target will improve his overall game in the pocket. Jackson has size, speed and a history of making plays in this league. Think one-on-one matchups that favor the Bucs when looking at the contract.

Redskins add wide receivers: Washington is in a prime position to draft QB Robert Griffin III after the trade with the Rams and that’s why signing WRs Pierre Garcon and Josh Morgan was the right call. Build around your rookie QB and give him options outside of the numbers. The ‘Skins paid a some money up front to land Garcon, but this is more about making a commitment to the offensive side of the ball. And we could see yet another WR coming to town in Eddie Royal.

Meachem to the Chargers: San Diego filled the role of the departed Vincent Jackson by signing the former Saints WR to 4-year, $25.9 million dollar deal ($14 million guaranteed). Meachem is athletic, can create after the catch and should see plenty of targets from QB Philip Rivers in San Diego.