Let’s take a quick look at the Chargers 34-7 win over the 49ers. Five things that stood out from my perspective.

1. The 1st quarter deep ball: I like the call from the Chargers early in the first quarter. Get Vincent Jackson aligned in a reduced split and throw the 9 (fade) route—because it gives your WR a chance to go make a play. Niners’ CB Nate Clements is there on the hip of Jackson, but this is a tough spot to be in as a DB. You have to find the ball and play through the hands of the wide receiver—which Clements does to an extent. However, Jackson (5-112-3 TDs) goes up and high points the football and runs in for a 58-yard TD. And that is why you take shots when you are near mid-field as an offense. 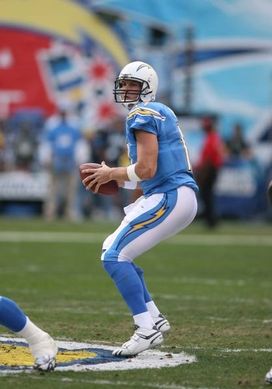 2. The Chargers’ route concepts: I saw plenty of concepts that took advantage of the 49ers’ coverage schemes. Three level routes such as the OVS (outside vertical stretch: 9, 7, flat combo) vs. Cover 3. Underneath crossers vs. the zone blitz that targeted the linebackers dropping into coverage. The whip option out of an empty alignment that allowed Jackson to work inside of the numbers. And, inside of the red zone, the Chargers get Jackson working underneath on a WR option route vs. a linebacker, plus a deep 7 (or flag) route for a score. These aren’t complex route concepts here—but they are productive when you target coverages. Great game plan and big numbers—again—from Philip Rivers: 19-25-273-3 TDs.

3. Alex Smith struggles: I didn’t think he took enough risk in a game that the Niners needed to win. Threw the check down most of the night and you aren’t going to win a crucial December football game unless you challenge the defensive secondary. Throw the inside vertical seams vs. the 2-deep looks and test the top of the defense. Plus, when you read pressure at the line of scrimmage, check to the 3-step game, get the ball out of your hands and let your play makers go to work. He didn’t look comfortable at all vs. the Chargers’ blitz packages and was sacked six times. Very timid play from the San Fran QB.

4. Vernon Davis is a no-show: Another issue for the Niners tonight. I thought the San Fran game plan to use the spread looks with Davis aligned as a WR outside of the core of the formation would produce results. But with the poor play of Smith, the disappearance of the run game and the coverage schemes from the Chargers’ Ron Rivera, we watched a player that wasn’t a factor. Davis should be the top target in this offense, butwhen he finishes the night with one reception you aren’t going to score points.

5. Mike Tolbert: The Chargers’ running back is fun to watch because he gets downhill so quickly with his pads low—and that is perfect fit for what Turner wants to do from a play calling perspective. San Diego’s run game is basic, but it sells when you have a player like Tolbert carrying the ball. One read, hit the whole and move the sticks in the Power O (FB kick out, Guard pull), plus the Lead Open and Lead Strong. Tolbert wore down a tired 49ers’ defense in the second half.