Let’s check out some game notes from the Bears 16-0 win over the Dolphins down in Miami…plus all of my picks for the rest of the Week 11 NFL games.

Thigpen’s night: I was surprised at how rushed—or rattled—the Miami QB looked for most of the night. Yes, the beat-up Miami O-Line did contribute to that, but you still expect to see your QB make some plays. With his experience from the ’08 season (11 starts) I expected to see a QB who could at least manage the Dolphins’ game plan. Did not handle pressure in the pocket and when he did escape contain we saw a QB who didn’t keep his eyes down the field. Thigpen goes 17-29 for 187-yards and an INT. 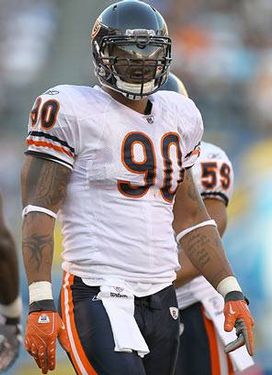 Peppers racked up three sacks in the Bears' win over Miami.

Chicago’s D: This is a very good defense. Didn’t do anything differently than we have seen all season: Cover 2, eight-man fronts and zone blitz schemes. But, as we talked about earlier this week with the Bears defense, they attack the line of scrimmage and play with great technique in their Cover 2 scheme. Go back to the Charles Tillman INT. Rush four, drop seven. Julius Peppers (3 sacks) gets a hand on the ball at the line of scrimmage and Tillman makes a basket INT—all because he played the proper technique. Sink under the 7 (or flag) route and protect the safety. Whether you are a fan of Cover 2 or not, the Bears are playing this scheme at a high level.

Forte’s production: For a short week, I thought the Bears’ RB saw the field better than he has the entire 2010 season. Carries the ball 25 times for 97-yards and a TD. He was patient, allowed his blocks to develop and showed that burst when he pressed the edge of the defense. Chicago used Forte in the Counter O scheme, the 2-back power runs (Power O, Lead Open, Lead Strong) and in their one-back packages.

Cutler: Let’s just get this out there to start: he is going to force the football every week. The curl route, the slant into zone coverage, the out route, etc. If Cutler thinks he can make the throw, that ball is coming out. Took to many chances—again. However, there are some positives. The Bears’ QB was very good on third downs and had no problem throwing the slant, the whip option and the underneath crossers in Martz’s Hi-Lo Opposite route concept. His final numbers: 16-25 for 156-yards and a TD.

Cameron Wake: Explosive off of the edge. You can see from the start of the game that Wake had a matchup advantage against the Bears’ J’Marcus Webb. Can rush with power, is solid with his hands at the point of attack and has the speed to routinely beat a player—such as Webb—that is slow off of the ball. My question: why didn’t Mike Martz use more six-man protection and “scan” the back to Wake’s side in the first half? At a minimum, use the RB to chip on Wake before he gets out in the route scheme.

Hester in the return game: Quick point on Hester. We know he has a unique ability to return kicks, but it goes deeper than his athletic ability. Watch his technique: press the coverage by running laterally and then get vertical—with speed. Great returners will start with a lateral path to widen coverage lanes and then pick their spots. Hester does that better than anyone in the league, and when you add that burst he is tough to contain. 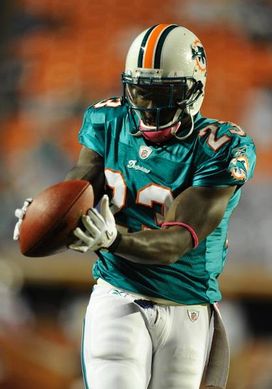 ICONBrown and the Dolphins' run game was nonexistent.

The Miami run game: Where was it? I thought we would see at least 5-6 plays out of the Miami wildcat personnel after they used it in the win over Tennessee. Instead, it was put on the shelf. However, the production from Ronnie Brown and Ricky Williams was nonexistent. Give credit to the Bears’ defensive front seven, but also question the Miami play calling. With your No.3 QB under center, you need to protect him by running the ball. Brown and Williams combine for 11-yards. That’s bad football.

Chicago’s game plan: You could see the shift in Mike Martz’s game plan as the second quarter started. Run the ball, use play action to get Cutler out of the pocket and put the game in the hands of Forte and Chester Taylor. With the play of the Chicago defense, working the clock and setting up very manageable third down situations was the right call. Not surprising to see Martz play off of the Bears defense tonight. Chicago held the ball for almost 38 minutes and ran the ball 40 times. That wins.

Brandon Marshall: Three catches, two drops, a 15-yard taunting penalty and a hamstring injury. The taunting penalty—when he tossed the ball Cutler—was immature. Outside of that, nothing to see here. Thigpen needed his No.1 in the lineup.