Let’s check out my game notes from the Bears 40-14 win over the Vikings at TCF Bank Stadium that clinched the NFC North title. Five things that stood out from my perspective.

1. Hester continues to impress: Young kick returners—at any level of football—need to spend time watching tape of Hester. We know he has top-level speed, but watch how he gets up field. Doesn’t hesitate once he catches the ball and immediately gets through the open coverage lane. On the punt return that gave Hester the all time TD record for returns in the NFL (14 total TDs) he showed that burst with his first step and got vertical against the coverage team. He is fun to watch becasue every time he touches the ball there is a chance he can take it back for a score. 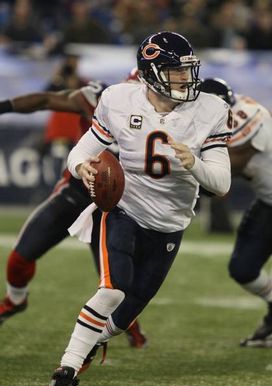 ICONCutler made some big throws in the Bears 40-14 win over the Vikings.

2. Cutler: The Bears’ QB made some big throws tonight. The 67-yard TD to WR Johnny Knox vs. Cover 2. Run two verticals at the safety and make him move off of his landmark (top of the numbers). That creates a throwing lane down the sidelines. The skinny post to Hester vs. Cover 1 and the quick seam route off of play action in the red zone. Cutler is at his best when Mike Martz installs a balanced game plan that uses RBs Matt Forte and Chester Taylor. That has been the reason the Bears have had this second half run. 14-24 for 194-yards with 3 TDs and the one INT coming on an underthrown deep ball.

3. Favre: The hit he took from Bears DE Corey Wootton—that drove his head into the frozen turf—was enough to put him on the sidelines for the rest of the game. What did we see before he sat down? A pretty simple game plan that included the 2-back power running schemes with Toby Gerhart, the boot action and the zone pass reads vs. the Bears’ Cover 2. Even when the Bears brought a safety down into the box to create an eight-man front, the Vikings stuck to basic route concepts: the slant, curl, etc. Bottom line: we didn’t see enough—and it was tough to watch him leave with another injury.

4. Bears’ defense: Forced turnovers. That is what we expect to see from the Chicago defense. From a scheme standpoint, the Bears aren’t complex like a Rex Ryan or a Dick Lebeau. But, when they play their Cover 2 scheme with some zone pressure on third downs, they can limit the offense. That’s exactly what we saw tonight. And, when QB Joe Webb came into the game at QB, the Bears ran their system and continued to play solid football. Rush four and drop seven into coverage against a young QB. Because that forces him to try and fit the ball into tight throwing lanes.

5. Toby Gerhart: The knock of the rookie from Stanford is his lack of lateral speed, but in this Vikings' offense he can get downhill and produce. Run the Lead Strong and the Lead Open. Break that first tackle and get to the second level of the defense. He isn’t going to outrun the defense or make a defensive back miss in the open field, but he can still be productive at the NFL level because of his power and low pad level inside of the tackles. Finishes with 77-yards on 16 carries.