Some quick notes from the early Week 13 kickoffs. Five things that stood out from my perspective.

1. Saints survive: Go back to Brees’ final drive. Hits Robert Meachem on the deep post vs. Cover 2 to set them up. After a unexplainable 4th down penalty for being offsides by the Bengals, the Saints QB throws the easy back shoulder fade to Marques Colston for the win. That is a good road win for the Saints, and when Brees is given free opportunities, he is going to take advantage of them. 24-29 for 313-yards, 2 TDs and an INT. Not bad for a dome QB in the weather. 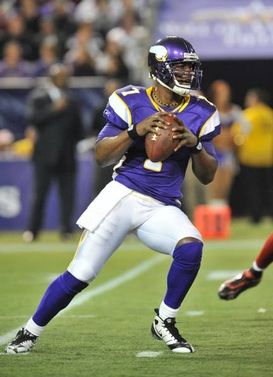 ICONJackson threw 2 TDs and 3 INTs in relief of Brett Favre in the Vikings' win.

2. Jackson steps in for Favre: Let's save the Brett Favre injury drama (shoulder) and talk about Tarvaris Jackson. He wasn’t perfect, did make some questionable throws, but generated points for this Vikings’ offense. I agree that he does give them another dynamic outside of the pocket, and if Favre is done, Jackson has to be the guy for the Vikings. The final numbers in the blowout win over Buffalo: 15-22 for 187 yards with 2 TDs and 3 INTs. Let’s not through too many bouquets his way just yet. The real story here? Minnesota runs the ball 40 times for 210 yards.

3. The Giants’ run game: How easy did that look in the win over Washington? There is plenty of justified talk about the injuries to the outside weapons for this offense, but you compliment that by running the football. Basic, downhill runs (Power O, Lead Strong and Weak) with Brandon Jacobs and edge runs (Stretch, Zone) with Ahmad Bradshaw. When the Giants are winning at the point of attack up front, these two backs can really compliment each other’s games and give New York options. Jacobs racks up 108-yards and 2 TDs (on 8 carries) and Bradshaw rushes for 97 yards and 2 TDs on 25 carries. Big production.

4. Greg Jennings: The production we saw today is a perfect example of why Jennings is a complete No.1. Wins at the line of scrimmage, makes plays in the vertical passing game and can finish with the football. Did you see the move he made on the basic one-step fade on the goal line? Nasty. Inside move at the line that freezes the CB and allows Jennings to walk to the corner of the end zone. Made it look easy. The Packers move to 8-4 on Jennings’ 122 yards and 2 TDs.

5. The Bears' Earl Bennett: Chicago’s WR is productive because of the system he plays in. The No.3 WR in the Mike Martz route tree runs the slant, the option, the underneath crosser and the quick one-step hot read. Bennett is becoming a top target for QB Jay Cutler and is showing that he can also be very productive after the catch. Ugly win for Chicago in Detroit. But they are putting together long drives facilitated by the short, quick passing games. Easy reads for Cutler to make. Bennett catches 7 balls for 104 yards in the 24-20 win.