Some quick notes from the early Week 12 kickoffs. Five things that stood out from my perspective…

1. The Atlanta running game: The Falcons are a legit 9-2 because they can run the football. Look at what they did in the 20-17 win against the Packers today with their 2-back downhill power schemes. Line up in their base Pro or Tank personnel (1 WR, 2 TE, 2 RB) and run the Lead Open, Lead Strong, Power O, etc. Come off of the ball and create running lanes from Michael Turner (23-110-1TD). We aren’t talking anything exotic here—because these are the same runs that you install on the first day of training camp. And Green Bay didn’t have an answer for it. 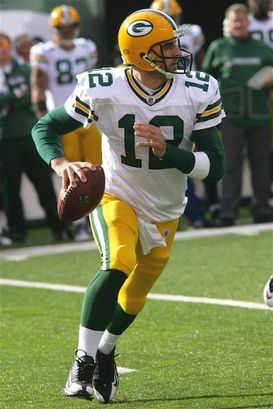 2. Aaron Rodgers: Check out these numbers: 26-35-344-1 TD. The Packers’ QB is lethal when they align in their empty sets (no back look), and as we saw today, can escape pressure and pick up valuable first downs with his feet. Plus, go back to the final drive. Rodgers goes 8-12 for 83-yards and hits Jordy Nelson on a 4th and goal situation—all because he extends the play and allows the WR to work the back line of the end zone vs. Cover 2. Outside of the fumble going into the end zone, Rodgers played at an elite level—again.

3. Eli Manning: The comeback win over the Jags should stand out, but what I take from this game in the play of the Giants’ QB. Didn’t post big numbers (14-24-226- 2 TDs), but throws both TD passes in the second half after the Giants played flat and dull to open this game. Think about this: Manning is working without his top two WRs. Yes, Kevin Boss made a play for him on the game winning TD pass, but I always go back to the QB when the team needs a play in a very crucial game in the second half.

4. The Vikings’ game plan: This is what we should have seen from Brett Favre and the Minnesota offense all season long. Run the ball, set up convertible 3rd down situations and allow the game plan to be shortened. The Vikings get 28 total carries combined from Toby Gerhart and Adrian Peterson and limit the amount of chances Favre had to take in the drop back passing game. It isn’t sexy—and it doesn’t have to include big explosive plays—but when you win on the road and your QB throws for 172-yards without an interception, you are doing things right. Big win for Leslie Frazier in his first game on the sidelines.

5. Rashard Mendenhall: Big game for Mendenhall in Buffalo and another example of how important he is to the Pittsburgh offense. Go to the overtime period. Didn’t need a complicated scheme. Use Mendenhall in the one-back runs and bleed the ball down the field. That sells because the Steelers’ RB is one of the most underrated backs in the league—but the production is obvious. Never easy to win in Buffalo, and getting 151-yards and a TD from your No.1 back on 36 carries always helps.