Let’s check out some game notes from the late Week 15 kickoffs. Five things that stood out from my perspective.

Click here to read my game notes from the early kickoffs.

1. Sanchez: The Jets’ QB made all of the throws that were in the game plan. Yes, the 9 (or fade) route to Braylon Edwards was big, but I am talking about the short to intermediate routes in the Jets’ playbook. The 15-yard dig, the stick out, the slant, etc. Routes that break inside of the numbers. These are the concepts (along with the boot action) that give Sanchez those quick, easy reads—and keep him out of trouble. Finishes 19-29 for 170 yards in the 22-17 win over Pittsburgh—and no turnovers. 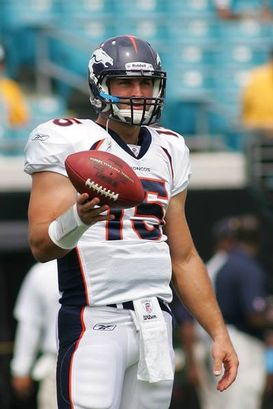 ICONTebow threw for a TD and ran for another score in his first NFL start.

2. Tebow’s first start: For his first start as a pro, Tebow did some good things. The numbers: 8-16 for 138 and TD, plus 78-yards and a TD on the ground. It wasn’t an overly advanced game plan from the Broncos, but we did see Tebow make some accurate throws, use the play action game and run the simple 3-step concepts: curl, out, hitch, etc. Obviously, Tebow will be used productively in the QB draw action, but I still want to focus on his play as a drop back QB—because it was our first chance to get a look at it. Let’s not rush to judgment either way on him yet, because we still have to see him play consistent football with a in-depth game plan that asks him to take more chances.

3. Matt Ryan in the red zone: There is a concept I want to talk about from the Falcons 34-18 win in Seattle. In the red zone, Atlanta will use a reduced split by the WRs to the open side (or weak side) of the formation as run the sprint action with QB Matt Ryan. The concept: flat-7 (flag). This is a call in every NFL playbook, but Ryan is so good when he is out of the pocket at squaring his shoulders to the target and delivering the ball. When did we see this exact same concept from the Falcons? Final drive for a TD in the win over the Ravens.

4. Rashard Mendenhall: Even in the loss, it is hard not to notice how productive the Steelers’ RB is. He has a unique ability to bounce plays that get stopped in the hole—and keep his vision down the field. Ran hard, racked up 100-yards against a very good Jets’ defense and will be a key if the Steelers are going to make a run in January.

5. The Jets’ final stand: Interesting, because for all of the pressure that the Jets bring—in every situation of the game—Rex Ryan played coverage for the final two plays in the win over Pittsburgh. Rush three and drop eight into coverage—creating a three deep, five under look. What you get is a wall formed across the goal line and three defenders playing the end zone. Essentially, the Jets played a tent over the end zone and didn’t give Ben Roethlisberger any windows to throw the ball. Good call.

Check back to the NFP tomorrow morning for my Week 15 winners and losers.