Let’s take a look at some post game notes from the Bears 20-17 win over the Packers at Solider Field...

Packers' penalties: Bad football. That is the best way to describe it. Eighteen total penalties. Holding calls, false starts, pass interference and the personnel fouls. Call it undisciplined football and bad technique from the offensive line against the Bears front four rush. But, you can’t have them and win on the road in a divisional game. You want to talk about a rough meeting to be in? Try sitting in that front row of Mike McCarthy’s team meeting on Wednesday morning in Green Bay. 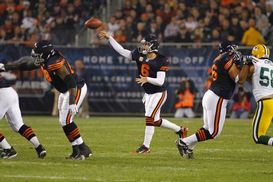 Cutler’s night: I still see Jay Cutler as a fit for what the Bears want to do with their multiple breaking routes, the skinny post, the deep 15-yard dig, etc. But, there is always going to be some risk involved. He has no issue challenging the secondary or throwing off of his back foot into coverage. Will give the ball away and make a big play as well. The INT he threw in the end zone was a drive killer and the seam route he threw to TE Greg Olsen helped set up the winning field goal for the 3-0 Bears.

Jermichael Finley: Matchup problem whether he aligns inside the core of the formation or removed in the slot or as the backside “X” receiver. Had his way against the Bears’ Cover 2 defense running the inside vertical seam, but what is more impressive is what he can do running underneath routes. There are so many options you have as an offense when the TE is as dynamic as Finley is in the passing game. Can run the entire route tree.

Rodgers vs. pressure: We know what Packers QB Aaron Rodgers can do against Cover 2, but let’s focus on his play vs. the Bears’ pressure. Chicago becomes a Cover 1 team in 3rd and 2-6 situations. That is what they do under Lovie Smith. Corner backs play outside leverage and they keep a single high safety in the middle of the field. When Rodgers can read pressure, he has the ability to throw the 3-step slant, the 5-yard china, etc. The pass comes out quickly and Rodgers can place the ball down and to the inside—where the CB can’t make a play. Hester’s punt return: Great coaching point here. Let’s look at the technique. Hester took the punt, pressed the edge of the contain—forcing the coverage to widen—and made one cut up field. Too often we see young returners try to get lateral and outrun the contain, but Hester becomes exciting when he attacks the coverage instead of trying to make people miss. Special teams coaches in the NFL will teach returners to get up field—and that is what we saw. Big play.

Urlacher’s game: He is quick to the ball, doesn’t run over the top of blocks and can play from deep to short in the Chicago Tampa 2 scheme. And, made the big play on the strip in the 4th quarter. The type of player that shows up in every clip when you turn on the tape the morning after the game. Urlacher is playing great football.

Martz’s 4th down call: Going to be talked about all week, but let’s break it down—because it was a good call. The Bears came out in their Jumbo personnel (3 TE, 2 RB) and shift at the line of scrimmage to show the Packers a four wide receiver look. The Green Bay defense didn’t adjust and TE Desmond Clark was uncovered, had a free release off of the line of scrimmage and just needed a solid throw from QB Jay Cutler and we are talking about a TD. That is Martz for you as a play caller. I saw it first hand way back when he was my head coach as a rookie. Push the issue for four quarters—always. 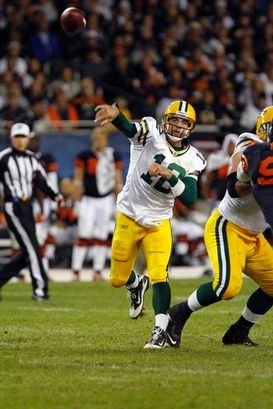 ICONRodgers' TD pass to Jennings was a classic Cover 2 beater.

Rodgers’ TD pass: The Bears play Cover 2 in the red zone. Every offense knows that. The Packers run a route that is a classic Cover 2 beater—the double china-post. Motion to empty with a slot open look to the field (3 WRs). Greg Jennings aligns as the No.3 and runs the post with No.1 and No.2 running the china routes (5 yard in-routes). It is designed to put pressure on the Mike backer and the route breaks inside of the safety. A good throw will lead to a TD almost every time.

Olsen’s TD catch: 3rd down situation for Chicago inside of the red zone. Align in empty, run a smash-7 (or flag) concept top the field and work the double slants on the inside. Quick throw and all Olsen has to do is win at the line of scrimmage. Good call.

Capers' blitz schemes: We can talk all day about the multiple looks and different schemes that the Packers use a defensive, but what stands out to me is how Packers’ defensive coordinator Dom Capers’ incorporates his secondary into the blitz front. The Corner Cat, the nickel blitz, etc. Tough to count those players in the protection schemes—and usually leads to free runners to the QB.

-I’m still impressed with Charles Woodson every time I see him play in the secondary. Active, around the ball and can tackle—something we often overlook.

- In a national game, Julius Peppers looked the part. How many holding calls did he force? Quick off the edge and had an impact in the run game.

- The pass interference call on rookie safety Morgan Burnett to put the Bears in position to win the game is a good example of a young player panicking with the ball in the air. Play the pocket between the WRs arms—don’t grab and hold. That always gets called.

- Do we undervalue Rodgers’ ability in the pocket? Great patience and knows how to extend a play.

- Didn’t necessarily need it tonight, but both clubs need to find a way to run the ball with more production. This can’t last for an entire season in the NFC North.

- The Bears' throwback uniforms. I thought they were solid...what about you?