Some quick game notes from the Eagles 34-24 win over the Texans tonight in Philadelphia. Five things that stood out from my perspective.

1. Vick’s night: I thought the Eagles’ QB played a very solid football game. Had to adjust when the Texans switched that game plan in the second quarter and started to bring man-pressure. But we saw the same things from Vick when he stepped up into the pocket and escaped pressure. Used the screen game, the read option look (which has become the No.1 run concept for Andy Reid) and despite some throws that were forced into coverage, still had complete control of this offense. I still think that Reid tries to get too creative in his play calling at times, and should just stick with the west coast system—because it fits his QB. Vick finishes 22-33 for 302-yards, 2 TDs and an INT, plus the 48-yards rushing an another TD. 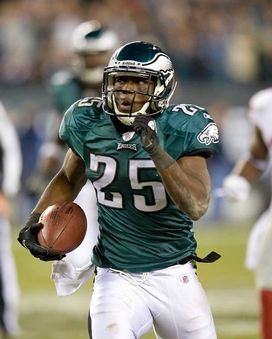 ICONThe Eagles' LeSean McCoy is a weapon in the screen game and the read option look.

2. LeSean McCoy: Look at the top two ways the Eagles get production from McCoy: the screen game and running the ball out of the read option look. Both cater to his skills. In the screen game, you get McCoy in the open field where he can challenge defenders in space. But the read option look out of the gun is something that is unique to the Eagles because of Vick. I don’t see Vick actually “reading” the defensive end like we see in the college game, but that backfield action is enough to hold the defense—and give McCoy running lanes. Not a power back, but a fit when we break down the Philly offense.

3. Johnson vs. Patterson: This is where we saw the impact of the Eagles not having Asante Samuel in the secondary. Start with the double-move. Johnson runs a basic stutter-and-go. Chop the feet and Patterson breaks to the out with his eyes in the backfield. The result is a 42-yard completion—too easy. We saw the fade stop, the curl, etc. Win at the line of scrimmage or drive the CB down the field when he aligns in an off-man position. This was a matchup that favored Houston all night--and this Philadelphia secondary looks real shaky right now. Johnson catches six balls for 149-yards.

4. Arian Foster: He is as real as it gets when we talk about NFL backs. Here is the thing with Foster. Everyone knows that he runs with power and keeps his pads low. We could see that tonight inside of the 10-yard line. He drives his legs on contact. However, we also have to talk about his cutback ability. That is what makes Foster dangerous on a basic Lead Strong—because he can cut back against defenses that over pursue to the football. The Texans has the right idea tonight to ride Foster in the game plan—but they didn’t have the defense to go along with it. 109 total yards and 2 TDs in the loss for the Texans’ RB.

5. Houston’s 4th down call: Go back to the 4th and 5 call with over three minutes left on the clock and down 10 points in the final quarter. As an offense, you have to extend the game in that situation. Instead, Matt Schaub tries to hit WR Kevin Walter on a back shoulder fade. Run a Hi-Lo concept, a combination route out of a bunch, a 3-step slant to Johnson, etc. Bottom line: run a play that will get you those five yards and another opportunity. That was bad football.