On Wednesday, I broke down Julio Jones vs. Nnamdi Asomugha. The straight 9 (fade) route from the Falcons’ WR vs. the Eagles' CB in a press-alignment. Plenty to look at there when we talk about technique, footwork, depth, etc. from the perspective of the defensive secondary.

Tonight, let’s check out another one-on-one situation from the Chargers 31-13 win over the Chiefs: Antonio Gates vs. Eric Berry. The 7 (corner) route vs. Cover 1 (man-free) with the SS playing over the TE in the slot. 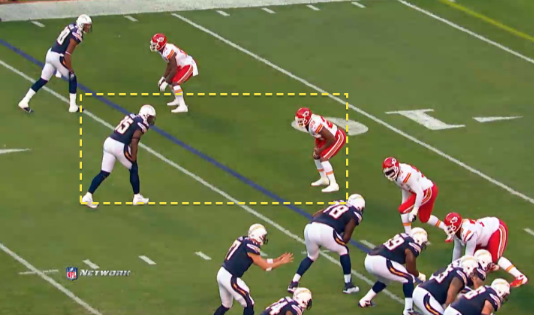 - Know the personnel. Why? When the Chargers align Gates removed from the core of the formation in the red zone you have to play for the 7 or seam. Two routes you should expect. With the Chiefs playing Cover 1, Berry should align with a slight outside shade (outside eye) and roll with the 7 or funnel the seam to the middle of the field.

- DB coaches would like to see Berry with his hands up (instead of low and on the knees). Same thing I said in my breakdown of Jones vs. Asomugha—because it takes time to bring your hands back up to punch on the release.

- Nothing wrong with Berry’s depth. This is as close as you can get vs. a receiver off the ball. However, the Chiefs have two DBs on the same level. Have to alert for pick situation when you play press.

- San Diego is running a Smash-7. Possibly the top route concept in the red zone. No.1 on the inside Smash and No.2 on the 7. 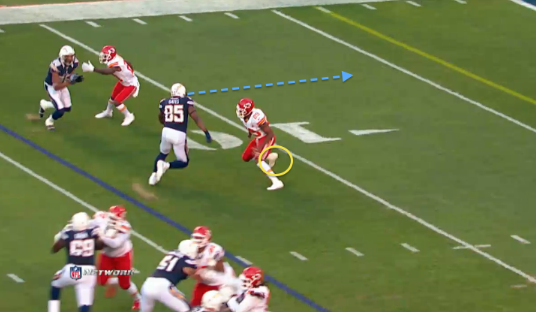 The reason I have the right foot of Berry circled in because of the “bucket step.” A term used by DB coaches when a player “steps behind” on the transition to open their hips. Instead of sliding your feet and snapping the hips, the “bucket step” forces you to lose balance and get too high. Not the position you want to be in vs. the size and length of Gates. 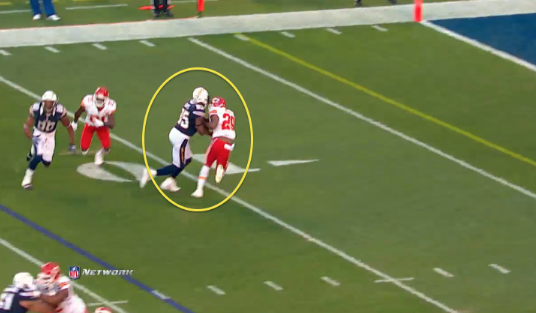 - It’s not going to be called. You have to live with that as a DB. When Gates gets into the body of Berry, he can use his strength to create some separation because of the safety's technique on the hip turn. Berry is too high on contact. 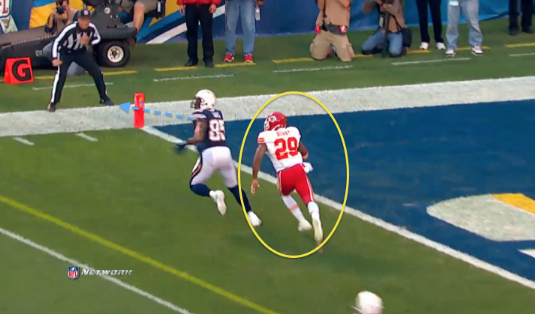 - Remember, the 7 route is an outside breaking concept. The FS in the deep middle of the field isn’t going to help over the top in the red zone vs. the corner route (too much ground to make up). This becomes a true one-on-one matchup and we can see the separation Gates has created vs. Berry to work outside the numbers. 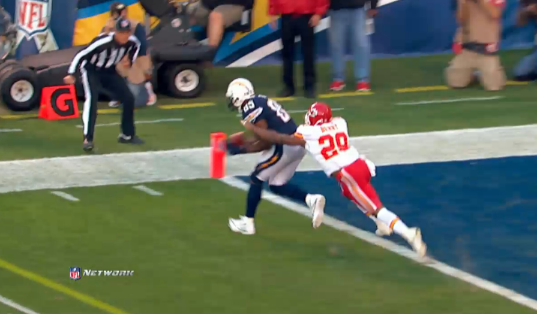 - Not a great ball from QB Philip Rivers, but Gates has enough room here to make the catch. Plus, with Berry now playing from a trail-position, this is six points.

Berry has the talent to hang with Gates. I have no question about that and he displayed his ball skills on the end zone INT tonight. But the reason he was beat in this situation goes back technique: footwork and leverage.