How would you grade out Caleb Hanie today? The Bears’ backup QB throws for 254 yards and 2 TDs (on 18 of 36 passing), but the 3 INTs were crucial in the 25-20 loss to the Raiders. Here are my game notes for Hanie—plus a final grade for the QB. 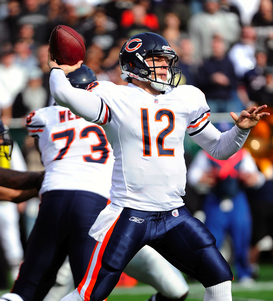 There were some positives for Hanie today, but he has multiple areas of his game to improve on.

- On the TD throw to Johnny Knox, the Raiders were showing Cover 0 pressure (no safety help in the middle of the field). The Bears’ WR takes an inside stem off the line of scrimmage and Hanie hits him on the skinny post. A quick, basic read vs. man-pressure. Get the ball out and let your WR make a play for you.

- Showed some ability to move with the football when he broke contain. On the flip side, Bears’ coaches will want to see Hanie stand in the pocket and step into his throws with pressure at his feet. However, he can run the ball and move the sticks.

- The deep ball. We only saw it once and it came in the final 3 minutes. Straight 9 (fade) route to Knox (who looks like his top target) vs. Cover 2. Get on top of the deep half safety and separate with the ball in the air. Big throw for 81-yards that leads to Hanie connecting with TE Kellen Davis on the “Hi-Lo” concept for another TD.

- Hanie has to learn to throw the ball away when he rolls to his right. Twice (with one resulting in his first INT), the Bears’ QB tried to make a throw down the field to a receiver converting his route. Unless you have an open window (and the arm strength), get rid of the ball and move on to the next play.

- Quicker reads. This is one area Hanie can improve on and something that will need to be addressed this week in his film study. Find your No.1 read, set your feet and deliver the football. And when No.1 isn't open, move down to your No.2 read and then the check down. Needs to be much more efficient here and confident in the pocket.

- Decision making in the middle of the field. On the INT intended for Matt Forte running the stutter-seam, that ball has to be thrown early and in front of the safety. Instead, we saw Hanie float the ball into traffic. That’s an automatic turnover on Sundays.

- The red zone INT on the TE throwback screen. I don’t agree with the play call given the Bears were inside of the 10-yard line with a 7-6 lead. A “gadget” play that is really only a smart call out in the field. But, as poor as the call was from Martz, the QB has to know this defense. The Raiders are a Cover 1 (man-free) team. And down in the red zone, defenders react quicker and jump their coverage. Aaron Curry was breaking to the TE before Hanie even let go of that ball. A disastrous turnover that swung this game for Oakland.

The Bears are now a 7-4 football team. I still expect them to compete every Sunday because they can play defense and take the ball away. But if they want to be a playoff team, Hanie has to improve his game, make better decisions with the football and trust his ability to make the throws with Jay Cutler out of the lineup.