How are the Bears targeting Brandon Marshall?

The Bears offense this season under Mike Tice can be called methodical at times. Lead with the run game and use the short to intermediate route tree with some play action mixed in. The deep ball? Max protect or use the 3-step game vs. pressure.

And after watching the tape from the Bears 51-20 win over the Titans, I found it interesting to see how Tice utilized the skill set of WR Brandon Marshall. A variety of alignments—and route schemes—for Chicago’s No.1 wide out.

Let’s run through some All-22 cut-ups and breakdown Marshall’s production (9-122-3TDs) from Sunday. 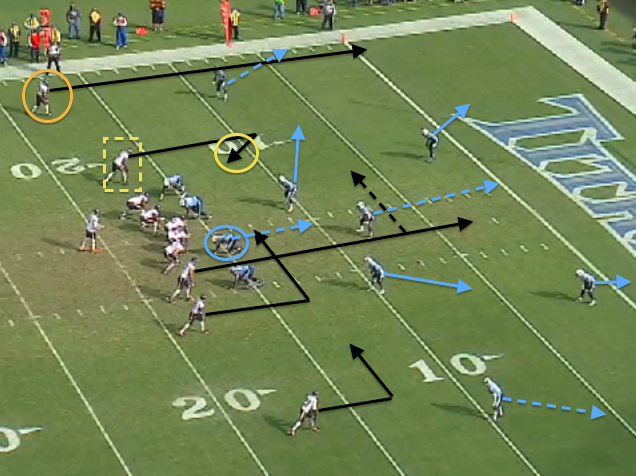 With the Titans showing a 2-deep shell, the Bears use “waste motion” (RB shifts to No.1 alignment) to create an empty formation with Marshall in the slot to open (weak) side of the formation. Base Smash route to the open side with Forte on the clear out (9) route to force the CB to sink—creating a hole for Marshall to sit down. And remember, whenever Marshall is in the slot he is there for a reason: to get the ball. 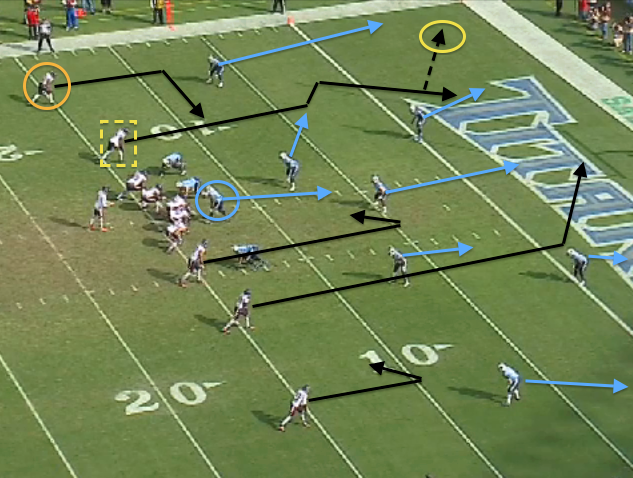 Cover 2 again from Tennessee with the Bears in the same alignment (Forte removed as the No.1 with Marshall in the slot). On the “Dino” stem (stem to corner, break to the post), the Bears want to put stress on the technique of the FS in the deep half (force him to open the hips and bite on the corner stem). However, with FS staying square once Marshall breaks back to the middle of the field, the WR has to convert his route back to the sidelines once Cutler steps up in the pocket. 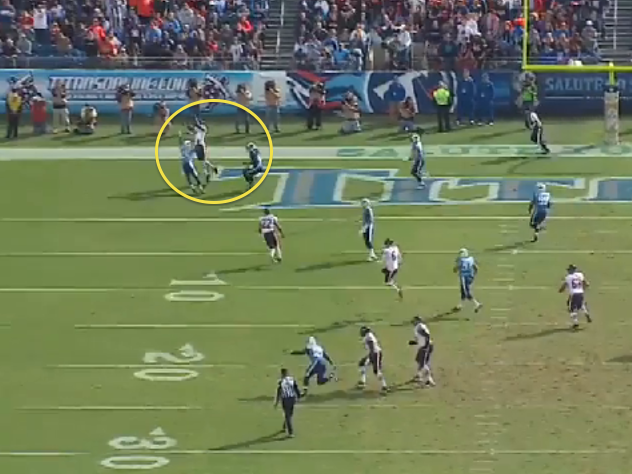 Great throw, great finish. Cutler puts this ball up high and allows Marshall to find the hole between the FS and the CB. Tough assignment for any DB in the red zone when the QB can extend the play and allow the WR to work the backline of the end zone. 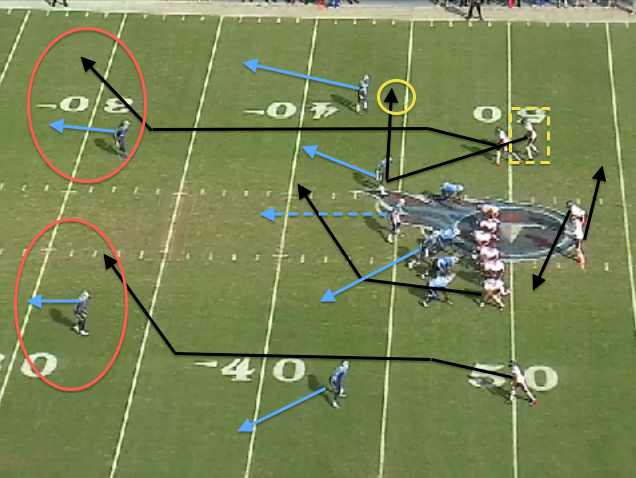 The Bears will use the Flat-7 (corner) or Flat-Seam out of their “stack” alignments. In third down situations, look for Marshall at the point with Earl Bennett underneath to run the “option.” Here, Bennett is running the 7 from the point with Marshall on the “whip” option (stem hard inside, plant and break back to the numbers). Working vs. Cover 2, this is another simple read for both Marshall and Cutler. Find the hole between the nickel (seam-hook player) and the CB. 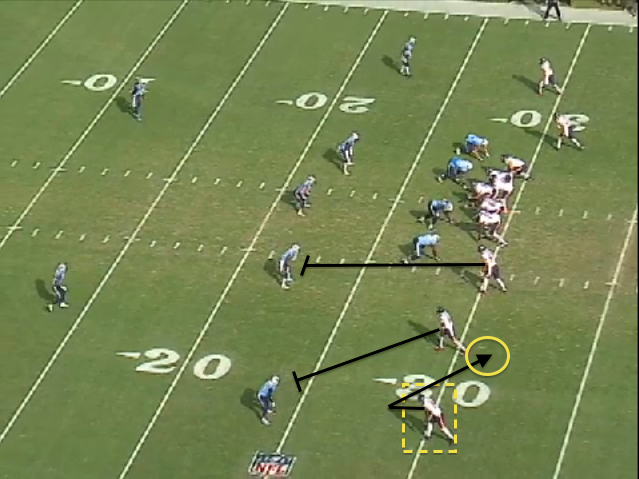 No.1 steps up the field, plants and comes back underneath with blockers out in front. Both the Slot WR (W) and the TE (Y) work up to the second level of the defense and create a running lane for Marshall. 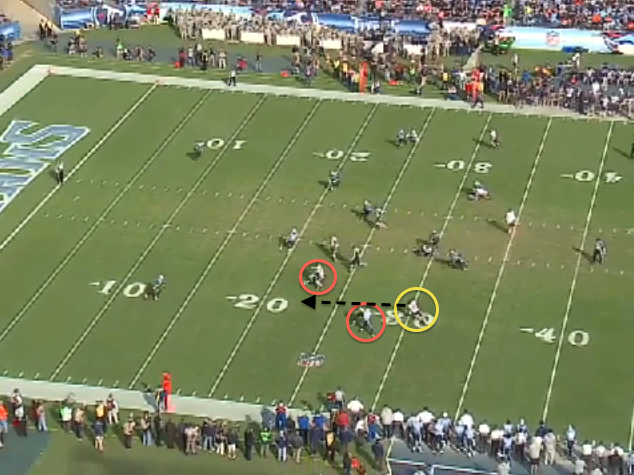 As you can see on the cut-up, the Bears get the blocks on the second level and Marshall can now work vertically up the field. An easy play call to get the ball to your top WR. 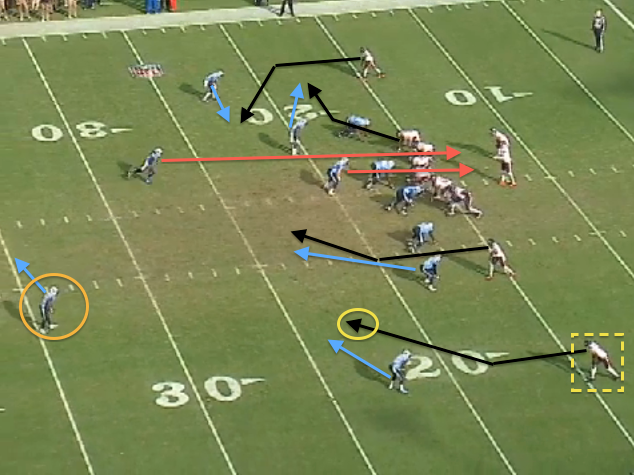 Going back to the Bears Week 9 win over the Panthers, they leaned on the slant route during the 2-minute drill (vs. Cover 4) to set up the winning FG as time expired. CB off and to the outside? Throw the inside breaking slant. That’s too easy for the size and length of Marshall. With the Titans showing (late) pressure from the secondary (and a single high safety in the middle of the field), Cutler throws the “hot” read to get the ball out his hands. Marshall stems up the field, breaks to the slant and creates leverage because of the route to make the catch. 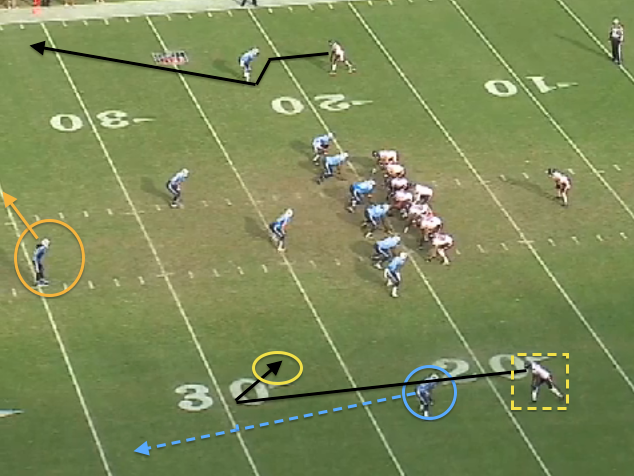 The Bears can get take advantage of off-man or a “bail” technique vs. man-free with Marshall. The CB opens his hips and drops at the snap (bail). That allows Marshall to press hard up the field and create some separation with the CB trying to maintain his cushion (distance between WR and CB). At the top of the stem, Marshall chops down and snaps back to the ball. Again, an intermediate route that provides an easy target for Cutler. 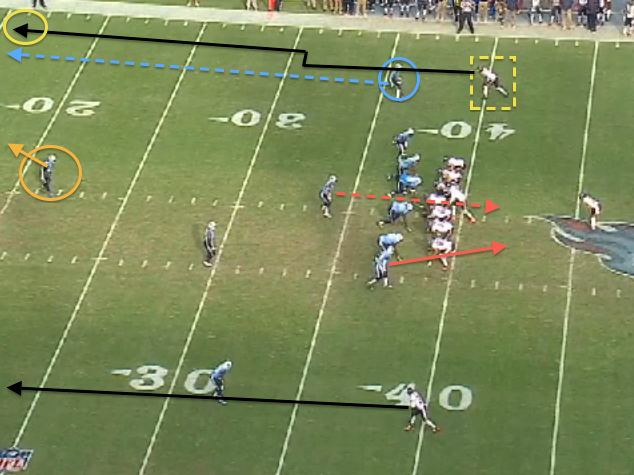 Max protection from Chicago (8-Man protection) with two 9 (fade) routes. Marshall will use the “stutter” at about eight-yards and then work vertically up the field. And with the back-shoulder fade, we know the CB is going to struggle to locate the ball. That’s why we see it so often in the NFL with size/speed WRs. 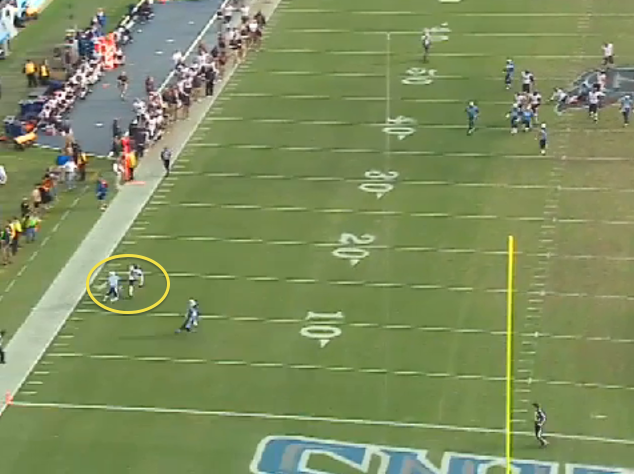 The FS isn’t going to help on the back-shoulder throw. This is on the CB to sit low on the inside hip, stay in-phase with the WR and go up through the hands to play the ball. Tough work vs. Marshall. 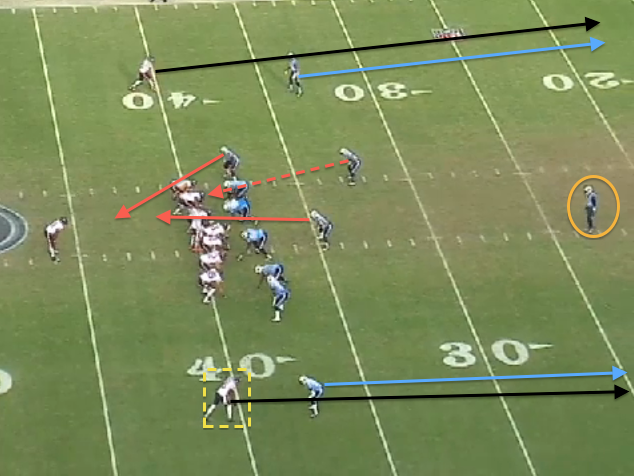 Why didn’t the FS make the play over the top? Cutler did a good job holding the safety in the middle of the filed by looking backside and then coming back to Marshall. Drop this ball over the outside shoulder and let Marshall go finish the play for six points. 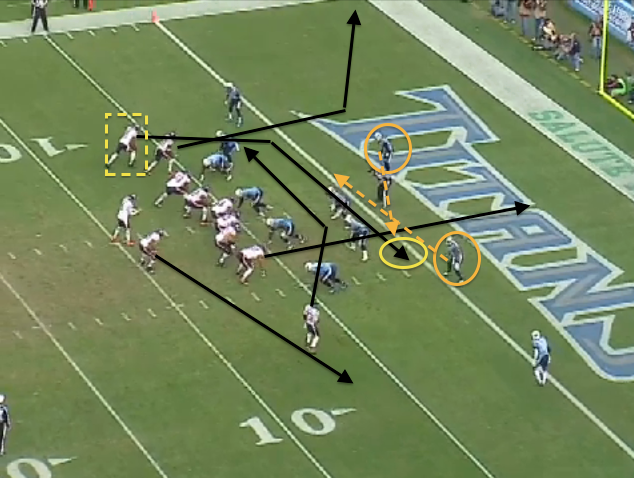 The Bears use short motion from Devin Hester (Z) to create a bunch alignment to the closed (strong) side of the formation with Marshall in a stack look to the open side. With the Titans using a “cut” technique (drive inside breaks) at the safety position, the Bears can create a pick situation and that allows Marshall to come free for the score.