How did Andrew Luck light up the Dolphins?

On Sunday, Andrew Luck threw for 433-yards (a rookie record) in the Colts’ 23-20 win over the Dolphins. After watching the tape, the Indianapolis QB played like a vet from my perspective. Look at his footwork, ball placement, plus the ability to read pressure and slide in the pocket.

Using that All-22 tape, let’s run through some cut-ups on four plays that showcased Luck's skill set on Sunday. 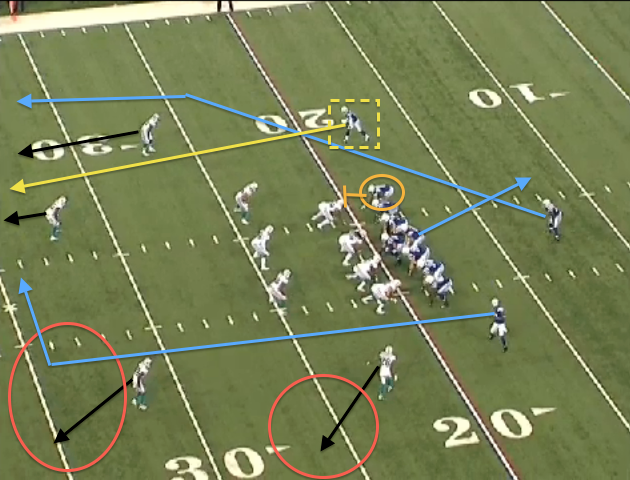 - The route scheme for the Colts: deep post with the outside RB “wheel” (or “rail”) off of play action. To the backside, Reggie Wayne runs the dig route (square-in), but Donnie Avery (yellow) is the primary read for Luck.

- Playing Cover 6, the Dolphins show quarters to the closed (strong) side of the field with a 2-deep shell (cloud corner) the open side. The SS reads No.2 (TE) for his run/pass key and looks to No.1 (Avery) if he is not threatened vertically. Roll to the inside hip and “bracket” the post with the CB playing from an outside leverage position. 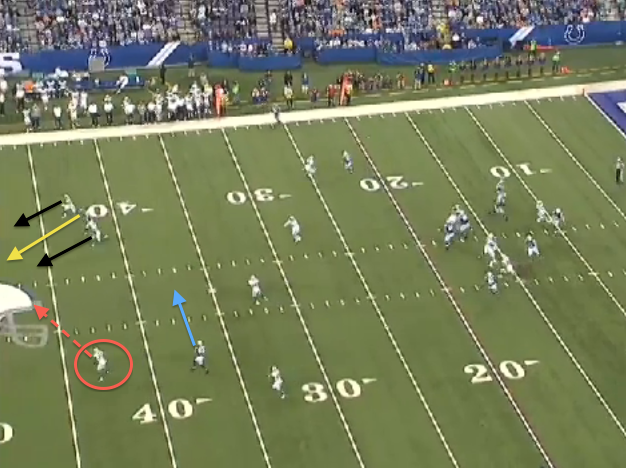 - Luck is going to be aggressive and take a shot here. I like it. As you can see on the cut-up, both the SS and closed side CB are in a position to play Avery on the post. The CB is high and to the outside with the SS low and playing to the hip. However, Luck is going to give his WR a chance to go make a play.

- Any backside help? That’s tough. The FS (red) has to play over the top of Wayne on the dig route and can’t leave the deep half until the throw. Too much ground to make up here. 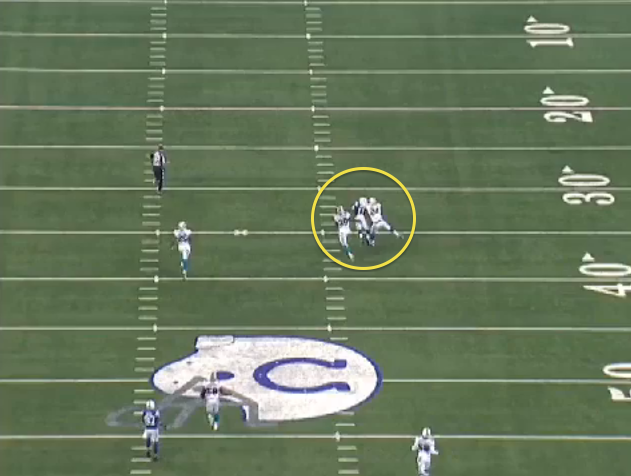 - This is what I call a “bucket throw” from Luck. The Colts’ rookie puts this ball on the up field shoulder of the WR and drops it in between two defenders down the field. 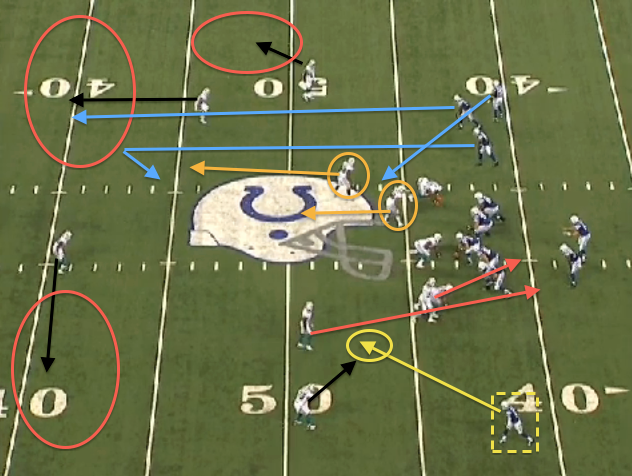 - Miami is showing open side pressure . A similar blitz scheme to what we see from the Steelers. A two-deep look in the secondary with underneath “vertical hook” players (orange) that match to No.2 and No.3 vs. a 3x1 formation. The corners use a “soft squat” technique (off with no jam) and read No.1 to No.2 (also called "Gold").

- Read the pressure. That’s where we often see rookies struggle at the QB position because of the multiple pre-snap alignments you get from NFL defenses. Here, Luck reads the CB playing off and throws the slant (or “hot” read). An inside breaking route that gets the ball out of the QB’s hands. 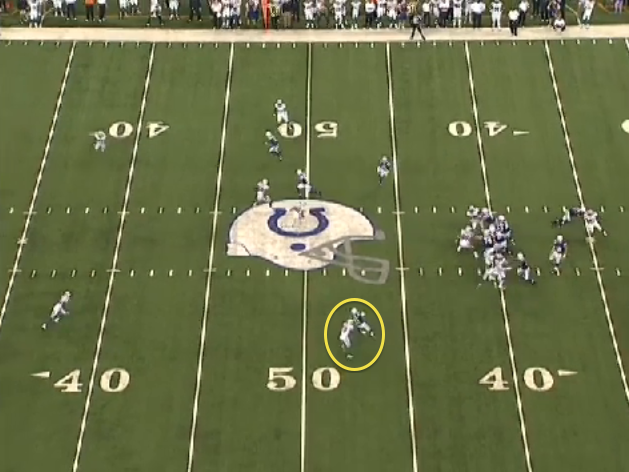 - This is a good break from the CB. Flat foot read through the route stem and drive to the up field shoulder of the WR. But it goes back to Luck’s ability to see pressure, throw the hot and defeat the blitz. Take what the defense gives you. 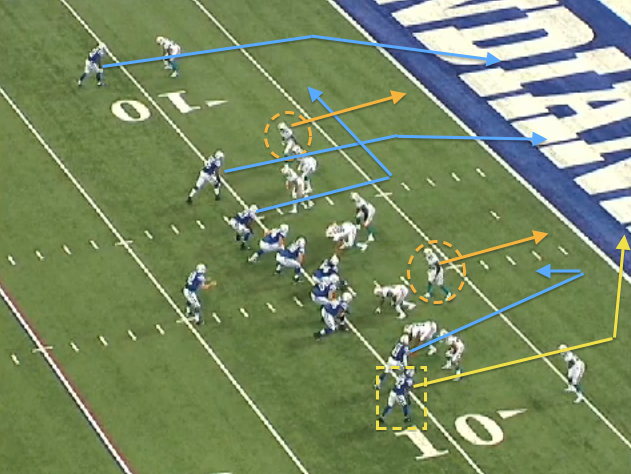 - The “Pin” (or “Mills”) is a Cover 4 beater inside of the red zone. No.1 (Reggie Wayne) on the post with No.2 on the underneath dig/curl. Force the safety to sit on No.2 and target the post.

- I’m going to call this quarters “technique” from the Dolphins. Both safeties (orange) are showing pressure and dropping to the inside vertical (quarters alignment) with the CBs playing from an outside leverage position. 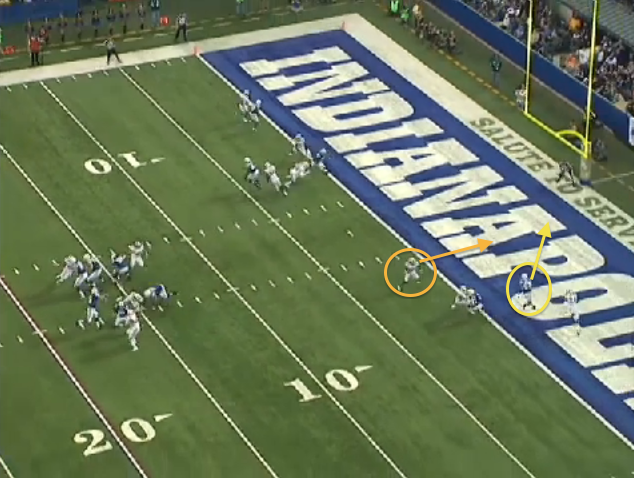 - With Wayne creating some separation on his break to the post, the WR now has leverage vs. the CB playing from the outside. However, with the safety underneath (and in the throwing lane) Luck has to put some air under this ball to finish the play. 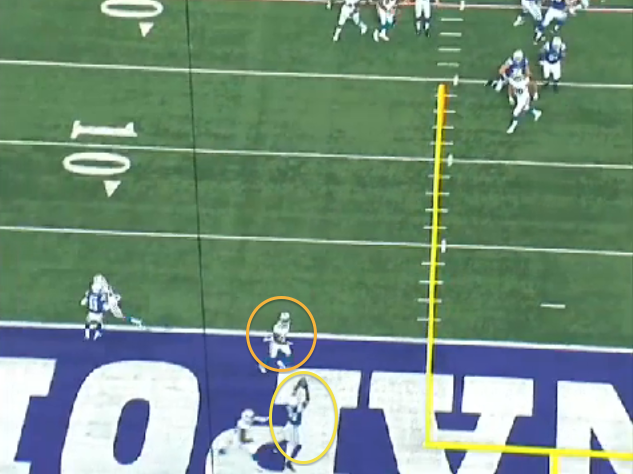 - Again, we are talking about ball placement with Luck. Look at the finish. The QB puts this throw high so Wayne can climb the ladder, make the catch and put six points on the board. 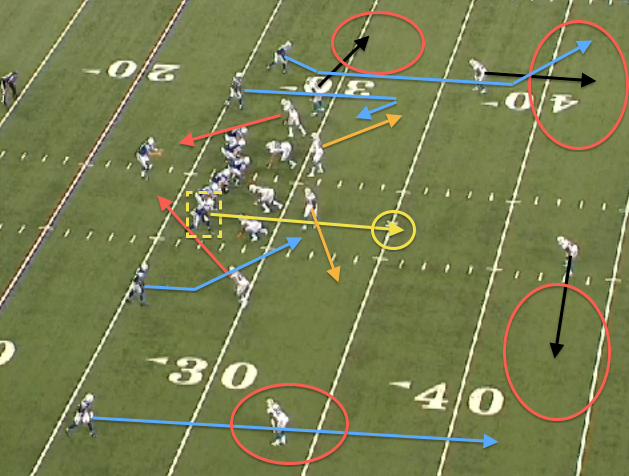 - The Dolphins are bringing edge pressure vs. the Colts empty alignment. Same blitz we talked about above when you breakdown the coverage (2-deep, inside “vertical hook” droppers).

- I'm seeing the inside combination route (Slot and TE) as a Hi-Lo concept. The TE on the intermediate dig (Hi) with the slot on the shallow crosser (Lo). However, this plays out as a blitz read or a “hot.” The TE releases vertically up the field and then get his head back to provide a quick target vs. pressure. 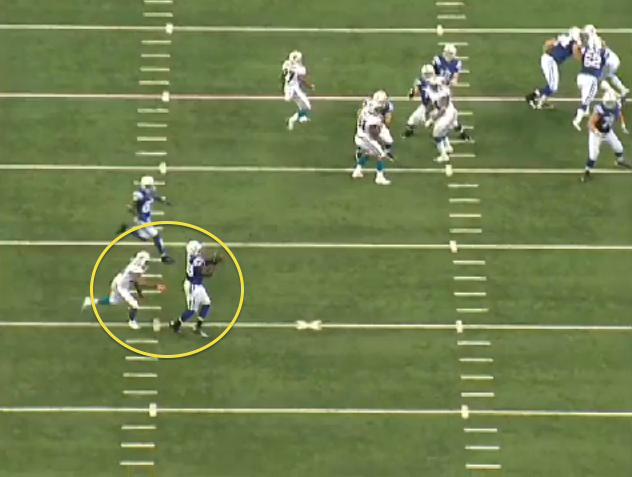 - Get the ball out. Luck targets the TE inside of the “vertical hook” defender and once again beats a Dolphins’ pressure scheme.

This is only a small sample size from the Colts’ win on Sunday. I get that. But it does show us the talent and decision making of Andrew Luck. Not bad for a rookie, huh?