How did Tebow beat the Vikings' Cover 2?

Cover 2 in the red zone. A topic we have discussed multiple times here at the NFP. A solid call inside of the 25-yard line (and one I would carry in my game plan), but there are route concepts designed to attack the deep half safeties and the Mike linebacker.

Today, let’s talk Denver vs. Minnesota from this past Sunday, take a look at the Broncos’ "4 Verticals" route shceme and break down why this coverage was a bust that led to Tim Tebow's TD pass to Demaryius Thomas.

A quick set up: Denver has their Posse personnel (3 WR, 1 TE, 1 RB) on the field vs. Minnesota’s base Nickel package (5 DBs). The Broncos align in a 2x2 “Orange” formation (spread look) with reduced splits from the WRs (on or inside of the numbers).

Let's check it out on the chalkboard: 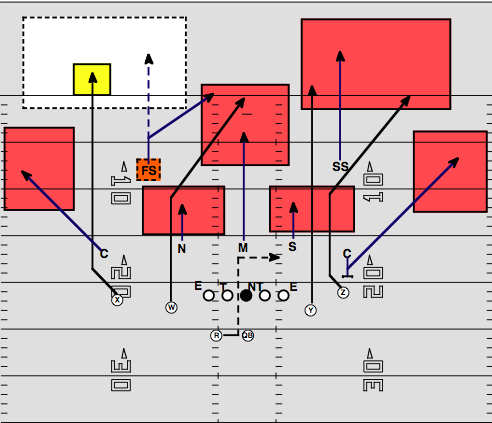 - As you can see, even with the reduced splits, all four Broncos' WRs will work to create separation and test the top of the defense. A standard Cover 2 beater inside of the red zone and out in the field.

- We talk about matchups all of the time and this route scheme is no different. With Thomas (X) getting a free release vs. a rolled-up CB to the open side of the formation, the Broncos have created a 2-on-1 situation vs. the FS in the deep half. Test his discipline to stay square in his backpedal to play over the top of two vertical routes.

- Foucs on Eric Decker (W). Straight vertical release from the slot, stem to the post and work the FS in the deep half. Why is this a key for Thomas running the 9 (fade) route outside of the numbers? Decker's route puts two vertical schemes on the FS in the deep half and will test the discipline of the defense. A false step from the FS or a poor read and it will lead to points.

- Both CBs will play what is called a “soft squat” in the red zone. Take the stress off the safety, protect on the 7 route (corner) and carry the vertical from a trail position—reacting back to anything in the flat. However, to the open side, Thomas gets the free release (no re-route) and the CB doesn’t sink with enough depth underneath the 9 route.

- Have to trust your eyes as a FS (highlighted in orange). Even with a post route breaking in front of your face, stay square and drive downhill only when the QB declares to throw the football. You can’t jump routes as a deep half safety in Cover 2. Let the Mike Backer handle Decker on the post and overlap to the middle of the field if Tebow wants to throw the ball inside of the numbers.

- What do we have now? A busted coverage due to the route concept. With the FS driving to the middle of the field, the open side deep half (highlighted in white) is wide open. Too easy for Tebow and Thomas. Can't let that happen in the NFL.

Want to see it all play out? Check out the replay...