How do you beat Cover 3?

How do you beat Cover 3? Run a 3-level concept to exploit the 3-deep, 4-under zone defense. Let’s take a look at the “Sail” route, break down some coaching points and discuss why this route concept is tough to defend when Cover 3 is called in the huddle. 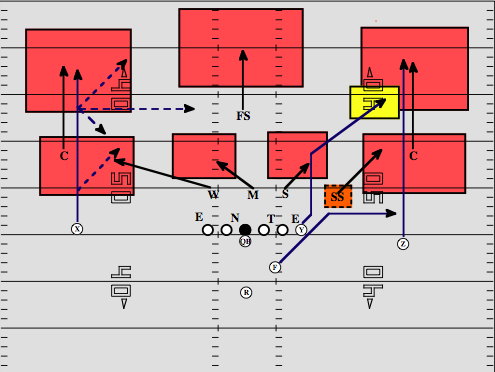 Route scheme: You will see the “Sail” route often vs. 3 deep (and zone blitz) teams. The No.1 WR to the closed (strong) side (Z) will run the clear out 9 (fade) route with the TE (Y) taking a vertical release and breaking on the 7 (corner) cut. With regular personnel on the field, the FB (in an offset alignment) will run the flat. Look to the open (weak) side of the formation. Multiple options with the X receiver: 9, slant, curl, dig or post.

Base Cover 3 rules: This is an 8-man front with the SS in a 3x5 alignment vs. the TE. The SS and Will Backer (W) will take a curl-to-flat drop with the Mike (M) and Sam (S) playing the inside seam-hook. In the backend, both CBs will drop to the deep outside third (and match to any vertical) with the FS in a single high look playing the deep middle of the field.

Curl-to-flat drop: One of the first techniques strong safeties around the NFL run through in offseason. Read your run/pass key (Y); drop at a 45-degree angle to a depth of 10-12 yards, hold off the curl and drive to the flat on the throw.

Clear out 9 route: Clear the CB out of the play. The Z will take a vertical release and push the CB down the field for one reason: to open up room for the TE on the 7 route.

SS technique: This is tougher than it looks on the chalkboard. As a curl-to-flat defender, the SS (highlighted in orange) has to “cushion” the 7 route and force the QB to target the FB on the flat. Depth and the angle of the drop are key. You want the ball to go to the flat here.

Why the “Sail” works vs. Cover 3: Think about the "Smash-7” or “Flat-7” vs. Cover 2 (Tampa 2). The offense is using the underneath concept to set the bait for the CB. Pull him down towards the line of scrimmage and target the second level route. Same idea with the “Sail” vs. Cover 3. The offense is looking for the SS to shorten his drop or jump the FB in the flat so they can target the TE on the 7.