How do you create 'A' gap zone pressure?

Previously at the NFP; I broke down some basic rules and techniques of the zone blitz (or Fire Zone). Rush five; drop six into coverage (3-deep, 3-under) and match to vertical concepts.

Today, let’s talk about “A” gap zone pressure out of the “Ruby” sub package (3DL-2LB-6DB). A zone blitz concept we installed in Washington to create inside pressure vs. Dallas Cowboys QB Drew Bledsoe in 2005. Take a look at the scheme up on the chalkboard and then we will get into some coaching points. 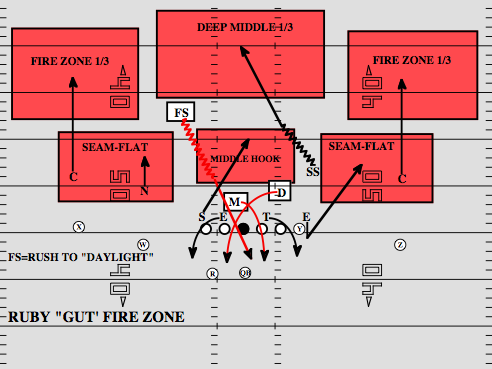 Pre-snap look: Think movement—and disguise. You want to show closed (strong) side pressure at the line of scrimmage. Here, I am walking the SS down and have the dime corner (D) showing to the TE side. Just before the snap, both safeties will rotate (SS moves to the deep middle 1/3) with the FS entering the blitz front. Bottom line with this pressure scheme: give the QB something to think about at the line.

Rush Five: Again, zone pressure is about creating confusion. Both the Dime and the Mike (M) will cross to opposite "A" gaps with the closed side DT and open side DE “scooping” to contain rush responsibilities. That leaves the FS to enter after the Dime and Mike have cleared—providing more inside pressure.

FS rush to “daylight”: Use some blitz technique here. You don’t want a FS that runs up the back of the Mike. Be patient in your stem to the blitz front and pick a hole. The O-Line isn’t going to count the FS in the protection scheme, so coach him up to be creative and find a rush lane. Here, I have the FS hitting the open side “A” gap, but that could all change depending on how the center calls the protection scheme. Remember, timing is key when you blitz from the secondary. And always keep your head on a swivel—because you might catch a forearm to the throat.

Drop Six: This blitz looks good on the chalkboard, but there are no guarantees it will get home. Both CBs will drop and play a “Fire Zone Outside 1/3” matching to No.1, with the SS playing the deep middle of the field. Underneath, the two “seam-flat” defenders (N, E) will match to No.2 with the Sam Backer (S) dropping to the “middle hook” (match to No.3).

Inside pressure: Why blitz inside? That all depends on the QB. When we were setting our game plan for Dallas that week, we knew Bledsoe couldn’t escape the pocket based on film. Instead of sending edge pressure (and allowing him to step up in the pocket), we came right at him. And whenever you are playing a QB that isn’t going to extend the play on the edges, the best game plan is to pressure in both the “A” and “B” gaps.