How do you defend play action on the goal line?

On Sunday, Giants' QB Eli Manning threw a 4th quarter TD pass to TE Jake Ballard to beat the Patriots in Foxborough. The scheme: basic Flat-7 (corner) combo on the goal line. Bring Heavy Personnel on the field (3 TE, 2 RB) and use play action to the open (weak) side of the formation. Read deep (7 route) to short (flat route) and test the discipline and eyes of the defense.

A concept we see every Sunday in the NFL inside of the 5-yard line. Why does it work? Let’s break it down and talk some coaching points.

First, here is a look at the Giants on Sunday from their pre-snap formation. I’ve drawn in the route concept with the defenders (SS and LB) matching to their coverage responsibilities 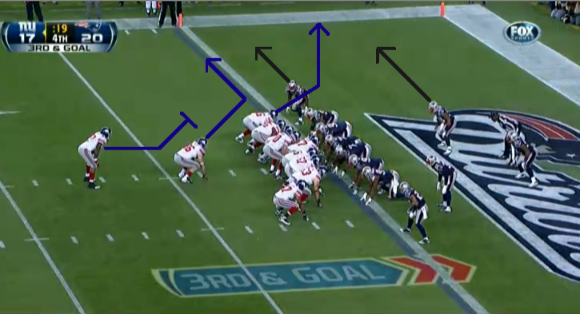 The defensive concept is a standard goal line coverage in the league. The force player (safety) will take the first receiver to the flat (FB) with the linebacker matching to the first vertical up the field (TE). Read your keys and react. Sounds simple, right? Of course, but down on the goal line in the NFL, the game moves fast. And one false step gets you beat.

Here are some keys to playing coverage on the goal line...

Run/Pass reads: You must know the difference between “High Hat” (pass) and “Low Hat” (run). Read the TE here, because he will tell you the play. If he blocks down attack the line of scrimmage. If he releases up the field, play your coverage.

Eyes in the backfield: This is what got the Patriots beat on Sunday. The LB to the open side took his eyes off the TE and put them right in the backfield. There is no reason to look at the QB or the RB. And when you step to the line of scrimmage because of a poor run key, you can’t recover on the goal line. Allow your run/pass key to take you to the play.

Track the FB: Think angles here if you are the flat defender. If the FB is going to kick out the force player on the Lead Open (Lead Weak), he will take an angle to block the safety and seal any outside penetration. However, when he is releasing into the route scheme, his angle will be wide (outside of the tackle box) to work to the flat.

Depth of routes: The Flat-7 out in the field breaks at a depth of 12-15 yards—every time. Don’t expect that in the end zone. The 7 cut is short, quick and run at a depth to create room for the QB to work the top of the route stem. Understand where the receiver is going to break.

Play the up field shoulder: Don’t gamble here (unless you have the skill set of Charles Woodson). If you try and undercut the 7 route, the QB is going to put the ball over your head. Working vs. an outside breaking route, you will be in a trail position. Drive to the up field shoulder and then find the football.

As I mentioned above, this is a basic route combination. However, if you don’t read your keys, and stick your eyes in the backfield, it is time to strike up the band and play the fight song. The game moves fast down on the goal line—and there is no room for error.