How do you defend the 'bunch' look?

Today, let’s breakdown one of the top techniques to defending a “bunch” look at the line of scrimmage: the “box” call. A 4-on-3 scheme designed to take away multiple level routes. Before we get into an example on the chalkboard, take a quick look at the basics of the “box” technique (this applies to every personnel grouping on the field). 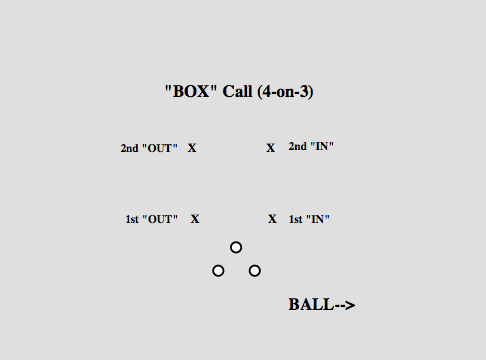 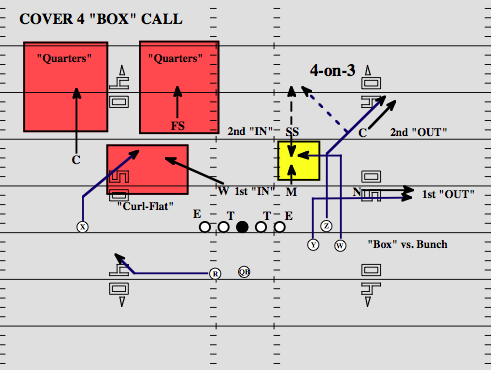 - Cover 4 (or quarters) was one of our top calls when I was with the Redskins. And the “box” technique was a big part of our game plan vs. the bunch. Here, I have the "box" call to the closed (strong) side of the formation with base Cover 4 rules vs. the slant (X) to the open side.

- The “Spot” route (7-curl-flat combination) is a common route in the NFL out of an aligned bunch or by using short “divide motion” (motion to the core of the formation) to create the bunch formation. Run off the top of the defense with the 7 (corner) route, widen the underneath defender with the flat route and target the curl.

- In the “Box,” the top outside defender (CB) will match the 7 cut with the underneath outside defender (N) playing the TE (Y) in the flat. That leaves the Mike (M) and SS to defend the curl (inside breaking concept).

- The SS has to protect the CB on a possible Corner-Post route. However, once the Z receiver makes a clear cut to the 7, the SS is now free to look outside for any route breaking back to the middle of the field.

- On the chalkboard, this should be an interception. Even if the W receiver sits down the curl route in front of the Mike Backer, the SS should plant his foot and break before the throw to make a play on the ball. Don’t hesitate, believe what you see (based on the pre-snap look) and go get this one. How do you defeat the “Box” technique?

Run the "OVS" (Outside Vertical Stretch) or the “Sail” concept (9-7-Flat) out of a bunch formation. Run off the CB with the 9 (or fade) route, widen the Nickel with the flat and force the SS to play the 7 (an outside breaking concept) from an inside leverage position.