How do you limit the Giants' front four rush?

The Giants and defensive coordinator Perry Fewell can play coverage, sit in a 2-deep shell or align in 2-Man (two-deep, man-under) because they can consistently generate pressure with four down lineman: Justin Tuck, Osi Umenyiora, Jason Pierre-Paul, etc. Put a top on the secondary, force the ball underneath and allow your defensive line to go to work.

Today, let’s look at this matchup from the perspective of Tom Brady and the Patriots. Here are five ways to beat the front four pressure of the Giants, move the sticks and put the offensive in situations where they can produce. 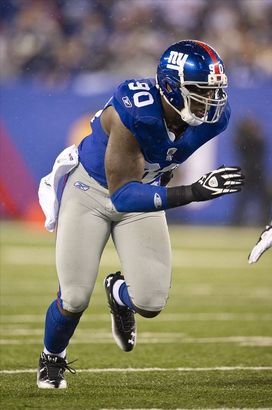 ICONBrady and the Pats must to slow down the pass rush from Pierre-Paul and the Giants' front four.

1. Screen/ Draw game: This applies to game plans vs. pressure schemes (think Baltimore, Pittsburgh, etc.) and a front four in New York that wants to get up the field and collapse the edge. Run the screen out of the backfield on early down and distances, use Wes Welker on the “Missile Screen” (WR Bubble Screen) and mix in the draw with a trap block up front.

3. Win on early down and distances: This sounds too simple because we can apply it to high school ball on Friday nights. However, you have to look at this from the perspective of the Giants. They want to get Brady into 3rd and 7-plus situations. That cuts the Patriots’ playbook in half and allows your secondary to focus on the intermediate route tree (dig, curl, out, seam, etc.). You can give up the option route or the check down and make a tackle to get off the field. And when you drop seven into coverage, this turns into a one-on-one pass rush drill up front. If Brady has to continue make throws on third and long, the advantage goes to the Giants.

4. Adjust protection schemes: I don’t believe the Patriots would want to use six (or even seven) man protection on a consitent basis because they are an offense that looks to get four or five receivers out in to the route scheme. However, if they can’t keep Brady off the ground, this could be a situation where the Pats have to lean on three-man route combinations. Sliding the protection or using the RB in “scan” protection is a way to keep Brady upright in the pocket so he can see the field.

5. Play-action: Again, we are trying to find solutions to force the D-Line of the Giants to slow down their initial burst on the edge. With play action, this also includes the LBs for New York. One step to the line of scrimmage and Brady can work the middle of the field. And don’t forget about max-protection, two-man routes with the ball near mid-field to test the Giants’ safeties. Ideal field position to take a shot with Brady having extra time in the pocket.