How do you stop Vick?

Let’s spend some time talking about Michael Vick this morning after he racked up six total touchdowns in the Eagles’ 59-28 win over the ‘Skins at Fed Ex Field on Monday night—because I want to figure out how to stop him.

When I see a quarterback who is taking over a ball game, I start to think about schemes and coverages. What could the Redskins have done better from a play calling perspective to limit Vick? Because you aren’t going to shut down the Philly QB right now the way the he is running Andy Reid’s offense. Instead, you have to generate a game plan that takes away aspects of his game. Maybe some Cover 6 (quarter, quarter, half) to mix it up? Cover 2 in passig situations? Cover 4—which the ‘Skins do play—zone pressure, man pressure? Options for sure. But no definitive answers. 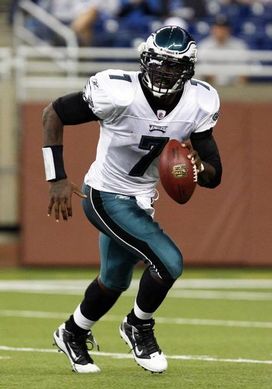 There isn't a defensive game plan that is ideal for stopping Vick.

Think about Reid’s offense--which I have broken down before. The screen game, empty sets and inside breaking routes where the ball is delivered between the hash marks and the numbers. That is the west coast passing tree. Hi-Lo crossers, Hi-Lo opposite, Hi-Lo triple-in flood (think underneath crossers in the Hi-Lo concepts), the dig route (square in), deep post, all slants, etc. Routes that Vick can throw.

And this offense expands even more with Vick’s ability outside of the pocket. Go to the first play last night—the 88-yard TD pass to DeSean Jackson. A deep post vs. the ‘Skins base Cover 2. Get Vick out of the pocket on the boot action and allow Jackson (who had a free release) to eat up the cushion of Washington safety LaRon Landry. Too easy. We also saw the sprint action and the dash (QB pulls up outside of the tackle box). Simple ways to get an athletic QB on the move. It improves field of vision. And with Vick we know what it also provides—an option to tuck the ball and run.

That’s the issue. Vick has looked very good in the pocket, even going back to before the rib injury. He is keeping his eyes down the field, going through his route progressions and taking the check down when the doesn’t have a play in the vertical passing game. That sells and you need that from your QB to win in the NFL. We started hearing words like “maturity” used when we talked about Vick’s level of play.

But, when the pocket does collapse, or he sees defenders playing Cover 2 with depth, he turns into the best athlete on the field. Last night, the ‘Skins used what is called a “spy.” Usually a DE, LB or SS that sits in the hole—almost like a “robber” in Cover 1—and tries to make a play once the QB breaks contain. However, we are talking about a big difference in lateral speed. No match for Vick. Bottom line: you can’t just sit back in coverage, drop to a landmark and make Vick run the ball. He has developed too much as a pocket passer. I played against him when he was a lot younger and that was the old school game plan. Make him beat you through the air and take your chances when he broke contain. Not anymore.

I think I have my answer. Pressure—both zone and man—in early down and distance situations. Force him to make quick decisions and limit his ability to move in the pocket. Get those extra runners at the QB and allow your defense to see some third and long situations. Use some exotic looks that create opportunities in throwing lanes. Then play some coverage and drop to those landmarks. Without a doubt is a challenge, but I would want my players to go after him from the jump--even if the Eagles' QB looks unstoppable after the Monday night highlight reel.

What about you? What would you run on defense? Let me know…