In July, it is all about camp prep for NFL players

For most players in the NFL, the 4th of July signals the start of the final phase of training for the summer. Conditioning, technique, position specific drills, etc. Two to three weeks of intense on the field work and explosive lifting in the weight room.

And even now—hopefully near the end of this ongoing lockout—it is time for players to fine tune their bodies and conditioning level to an elite status. Because jobs will still be up for grabs once we eventually see the pads go on for two-a-days. And you must be in great shape to compete in an NFL camp.

Today (before you start the grill or open up a cooler of Old Style), let’s take a look at how players will be training for the rest of the month. 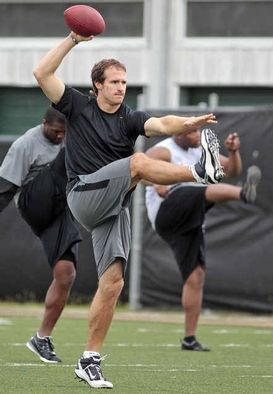 Players like Drew Brees will approach July by training their bodies to be in prime football shape for camp.

Conditioning: You should be in prime form on the first day of camp when it comes to your overall conditioning level—but it has to be done right. Shuttle runs (300 and 60-yard drills), change of direction, gassers, etc. Anything that is going to force you to reach top speed, stop and get back out of your breaks. Short, timed rest periods and then back on the line to do it again. Jogging or getting on the bike may allow you to drop a few pounds before camp starts, but that isn’t the answer for the game of football.

Linear speed: Think top end speed here, very similar to the rookies training for the combine. Starts, resistance work, weight sleds, build-ups and anything that will allow you to reach that peak speed down the field. There is enough time left in the month of July to increase your initial burst off of the line of scrimmage—and that leads to making plays on the field.

Lateral speed: Just like we talked about conditioning above and change of direction, players have to train at full speed making cuts. The shorts shuttle (20-yard shuttle) that we watch at the combine (5-10-5) is a great example of changing directions at top speed. Quickness over 40-times. Train your body to break at a 90-degree angle with explosive power.

Functional weight training: Bench press means little in the NFL if there is no power behind the movement and the same can be said for getting under the bar on the squat rack. I was an Olympic lifter during my career (cleans, snatch, jerk), but any movement that requires player to explode through the lift and work with movements that simulate the game are essential. Don’t go in the weight room to do bench and curls—that’s for retired athletes like me.

Positional work: If you are a DB, you should backpedal—everyday. The same can be said for every positional group on the roster. Use the rest of this month to work technique, drills and improve your footwork. And do it when you are tired—after your conditioning. Because that is how you are going to feel midway through an afternoon practice session in August.

Conditioning test: You know it is coming—so there is no reason to fail it. For most clubs, the 300-yard shuttle (run as 12x25 yards or 6x50 yards) is the league standard. You should run this test at least twice a week until the start of camp. Because no one wants to go through the drama that followed Redskins’ DT Albert Haynesworth after he failed to pass the shuttle test in Washington last summer. And, no active player wants to look like I did last week running vs. Detroit Lions DE Kyle Vanden Bosch in front of 200-plus football campers. That is bad football.

Have a great holiday…