Inside look at the Patriots' top route concept

If you want to beat Tom Brady and limit the Patriots offensively, you have to protect the middle of the field. The Patriots have a multiple attack from an offensive perspective and will run a variety of route concepts. Think inside combinations (plus the vertical seam) that convert based on the defensive look: Cover 1, Cover 2, Cover 3, etc.

But what is the top route concept—or combination—in the New England scheme? After watching some tape, plus talking to an NFL secondary coach, here is the route you must stop vs. the Patriots. 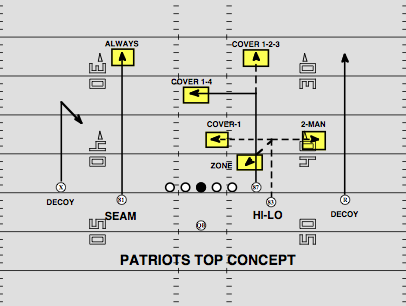 Some coaching points to break down…

- Empty alignment from the Patriots. The X and R? Decoys. Hitch, clear out 9 (fade) route, curl, etc. And this is why the Patriots don’t overpay for a X receiver—because that’s not where the ball is going on a consistent basis.

- I have Hernandez (81) in the slot to the open (weak) side of the formation with Gronkowski (87) and Welker (83) aligned in a “stack” to the closed (strong). However, all three receivers can play the open side slot or align in the “stack.” Interchangeable parts.

- No.3 to the closed side (87 in this breakdown) will convert the route based on the defensive coverage. If he reads Cover 1 or Cover 4, then run the dig (square-in). Read Cover 2, Cover 3 (or Cover 1 depending on game plan), then stay vertical up the field.

- To the open side, the No.2 (81 in this breakdown) will always run the inside vertical seam. Stem to the numbers to create leverage vs. Cover 1 and work the deep hole vs. zone coverage.

Where does this route show up?

- Next time the Pats play, focus on No.2 and No.3. You will see multiple combinations, but the Hi-Lo is the top read. It shows up often. Yes, you can get the "whip" underneath (stem inside, break back to the numbers), but we are still looking at the same concept.

- Welker’s TD catch on Sunday in Seattle. The WR aligned as the No.2 receiver to the open side of the formation (Seam) with No.2 to the closed side (Gronkowski) running the underneath read and No.3 working the inside vertical vs. Cover 1.

Why is it a productive scheme?

Middle of the field throws with some added window dressing. Hernandez can play the open side slot, or align at No.3 to the closed side. Same with Welker or Gronkowski. Flip alignments and give the defense something new to look at. Plus when you throw the ball inside of the numbers, receivers have open field to work with and can create yardage after the catch. Again, we have to understand this isn't the Patriots only route concept in the playbook. However, it is one of the top schemes you will see on game day from Brady and this New England offense.