Inside the playbook: A.P. runs over Cleveland

Today: The Running Game — Inside Zone

Click here for the previous edition of Inside the Playbook

Over the past couple of weeks we have been breaking down aspects of the passing game: the Tampa 2, Cover 3 and a sample of an open side fire zone. Plus, we used some TV tape to examine how they play out on Sundays. Today, let’s examine the running game, using Adrian Peterson and the Vikings as a model.

The Inside Zone, or “stretch play,” is a basic one-back run in the NFL that gets the ball to the tailback deep in the backfield. It is used league-wide due to the fact that it allows a running back to pick a hole, get up field quickly or to cut back when a defense overpursues to the football. And, as we will see, it can be a disaster for a defense when it is blocked to near perfection with A.P. coming out of the backfield at top speed — which puts all of the pressure on the secondary to make a play.

Let’s set it up. The Vikings are in Jumbo personnel on offense (1 WR, 3 TE, 1 RB), something we will see from the Patriots throughout the season when they are going to run the ball. The Browns are in their base defense with a 3-4 front.

The Vikings will use man blocking to the ball side in this formation and “scoop” on the backside to cut off any penetration.

Let’s check out the chalkboard… 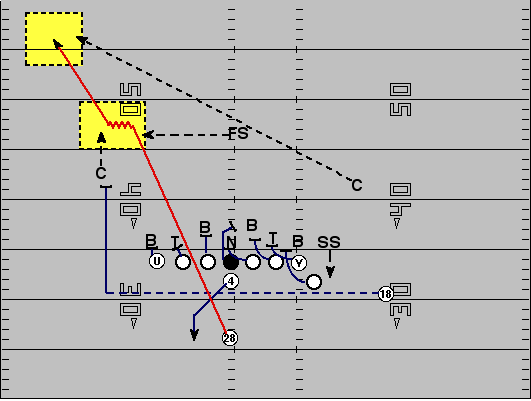 It looks to be pretty basic. However, let’s talk about two key blocks in this scheme that have to be made for the play to be successful. The center will “chip” on the nose guard and then work to the second level of the defense, cutting off the inside linebacker to the closed side. What this does is force the closed-side guard to cut off any penetration from the nose guard coming from outside in. A tough block at this level, but one that has to be made for A.P. to penetrate the line of scrimmage. If the nose guard gets up the field, this play is over.

The second block — one that we will see on the TV tape — comes from LG Steve Hutchinson. The guard has to work immediately to the second level vs. a 3-4 front and cannot allow the open-side linebacker to step up and fill the hole. Hutchinson comes off of the ball and drives the ILB to the ground. Two broken tackles later by Peterson (highlighted in yellow), it is time to strike up the band.

Let’s check out the video replay…

Now that we have seen the play both on the chalkboard and on video, let’s look at some coaching points that we can take home.

We hear this all of the time in the NFL, but this is a great example of what it means. The Vikings are not blocking down with a double-team on any one player, and outside of the “chip” by the center on the nose guard, this is a straight man-blocking scheme. The front seven of Cleveland looks soft at the point of attack, and for this play to be stopped, someone has to get off of a block and make a play. Too easy for the Vikes.

Two things we can take from the Vikings before the snap. The first is in the depth of Peterson. When a RB is aligned in the backfield at a depth of seven to eight yards, think run as a defender. He is set deep for this exact play so he can get the ball with room to work — and to find cutback lanes. When a pass is coming, the RB will align at five yards so he can get into the protection scheme. The second key here is Rice. Even with the pre-snap motion, he never gets past the numbers (a landmark in the NFL). With the ball already on the near hash, Jumbo personnel in the game and the WR stopping his motion inside of the numbers — expect run. Can they throw down the field? Of course, but then you rely on technique as a defender and play ball.

The SS is in the run front — playing cutback on run away — so that leaves us with two corners and a free safety. I am not going to pile on the free safety with A.P. coming at him full speed (I have missed plenty of times myself), but he needs to take a shot. As you can see from the video, he stops his feet and is forced to lunge to make a play. Not going to get it done on Sundays. Run through the tackle and get him on the ground.

The corners are an issue. The ball-side corner is responsible for forcing Peterson to stay inside of the block — and funnel the player to the free safety — but that doesn’t discount the fact that he needs to get off of a block and make a play. Can’t let WRs push you around. As a backside corner — an unblocked player away from the ball — your job is to get over the top of any explosive play and use the sideline. Using the sideline as another defender is the only chance in this situation. Find a way to run A.P. out of bounds.

Sound easy, right? Not really, and never when Peterson hits the secondary — untouched.