Inside the playbook: blitzing Brett Favre

Click here for a previous example of the Saints' "Ruby" package

Let’s talk Vikings-Saints today. We know that New Orleans defensive coordinator Gregg Williams is going to dial up pressure against Brett Favre and the Vikings — especially in third-down situations — but how? What Williams wants to do on Thursday night is pressure, but with coverage principles in the secondary. Cause confusion in the Minnesota protection schemes and then bait Favre into making a mistake with free runners in his face.

I want to look at one of Williams’ favorite schemes and detail how overload zone pressure can work and lead to turnovers. Let’s set it up and then check it out on the chalkboard. I put the Vikings in their standard “Posse” personnel (3 WR, 1 TE, 1 RB) against Williams’ “Ruby Package” (3 DL, 2 LB, 6 DB). This is a personnel grouping that the Saints will bring onto the field in pressure situations — and a personnel grouping where Williams is at his best in terms of creativity. The principle is simple: show overload pressure to one side of the ball and then bring actual pressure opposite the pre-snap looks.

Let's check it out on the chalkboard... 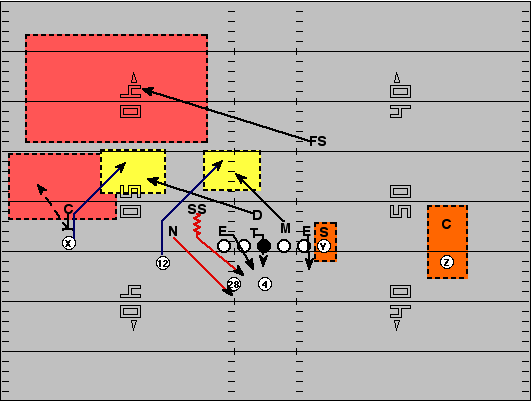 Let’s break it down by position to make it clearer and then get into some key coaching points.

The Saints are only sending five-man pressure in this scheme. Sounds easy to block, right? Not in this situation, because as we talked about above, it is the pre-snap look that is key. By showing an overload to the closed side of the offense, the Vikings should turn their protection to the right. When that happens, the Saints will send both the Nickel and the SS to the open side and the RB who is in “scan” protection. No. 28, Adrian Peterson, now has to choose: who do I take? There should be a free runner to hit Favre in the back if he holds onto the ball. 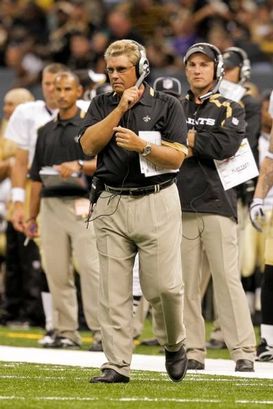 ICONWilliams will have a detailed pressure package for Favre and the Vikings.

The Mike Backer and the Dime back are crucial to the success of this scheme. They are responsible for essentially playing underneath any inside breaking route by the No. 1 and No. 2 receiver to the open (or weak) side of the defense. In this situation, I drew both the “X” receiver and the slot (No. 12 Percy Harvin) on hot reads. They see pressure and run the 3-step slant. With the protection of the free safety playing with 2-Man principles over the top, the Mike and the Dime can run underneath the slant routes and arrive when the ball is thrown (highlighted in yellow). What we are seeing here is the defense setting a trap for Favre and the Vikings offense. Very similar to a zone blitz scheme.

Both the Sam Backer and CB to the closed side (highlighted in orange) are in “solo” calls. Basically, they are playing Cover 0 with no help. It is a risk — a big risk — but the idea is that the ball will have to come out quickly, and all they will have to cover is the 3-step passing game and the one-step vertical game.

We talked above about the corner playing with “gold” technique. It is a term from the Pittsburgh Steelers’ playbook where the defender is playing a 2 to 1 read. For example, if No. 1 releases vertically up the field, the CB will drop that route to the safety and sit underneath (in a soft squat technique) to play the slot on the “7” (or flag) or the out route. Very similar to the same technique he would play in any form of Cover 2, but he is not sinking as fast as he does to protect the safety. Think of it as a matchup zone — where defenders will pass off routes.

A weakness in the scheme

There is one catch — as there is with any defense — and that is the RB. As you can see, there is no one assigned to play the back in coverage. A quick swing pass to Peterson and he is down the sideline. That is on the defense, and if the Vikings do break this scheme, look for Williams to assign the back in coverage in a sideline adjustment.

But, if the RB stays in on protection, this scheme is designed to force the ball to come out quickly with defenders running underneath to jump on routes. How do you beat it?

Check back to the NFP tomorrow for my Vikings-Saints tip sheet: a rundown of what to look for in Thursday night’s NFL kickoff.