Inside the playbook: blitzing the Ravens

Let’s get back on the chalkboard here at the NFP and talk Ravens-Steelers.

As we get ready to watch this rivalry again Saturday in the AFC Divisional Playoffs, here is my break down of Troy Polamalu’s sack and strip of Joe Flacco from the Steelers 13-10 regular season win over the Ravens. A chalkboard breakdown, the video replay and some coaching points to discuss.

Up 10-6, the Ravens have a 2nd and 5 situation with their Posse (or 311) personnel on the field (3 WR, 1 TE, 1 RB) vs. the Steelers’ 2-4-5 nickel defense (2 DL, 4 LB, 5 DB). With less than four minutes left on the clock, your play calling changes from a defensive perspective when you need a stop to get the ball back for your offense. In this situation, the Steelers go with Cover 0 pressure (no safety help). Create a 6-man pressure scheme with Polamalu and LB Lawrence Timmons blitzing off of the edge after they move to the line of scrimmage just before the snap.

The Ravens actually have a route scheme set up to defeat pressure: the flat-slant combo. A 3-step route scheme that gives the QB a quick, simple read vs. man coverage.

Let’s take a look at the chalkboard breakdown… 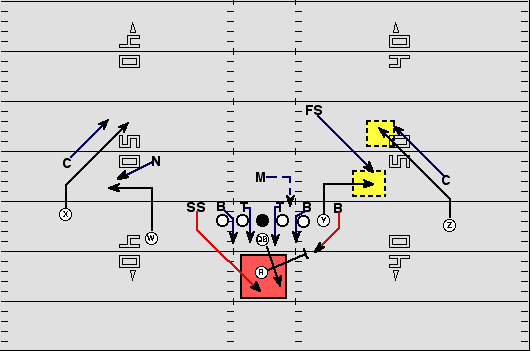 As you can see from the chalkboard breakdown, this becomes a 7-man pressure when the Mike backer “adds” to the blitz front vs. his coverage (R). FS Ryan Clark will show that he is playing the deep middle of the field in his pre-snap look, but move to his coverage (Y). Both CBs are playing man-coverage vs. the No.1 receivers (Z, X) and the nickel back takes the slot receiver (W), Anquan Boldin. It is a very simple scheme: 6-man pressure with five defenders in coverage.

For Flacco, his primary reads (highlighted yellow boxes) are the Z on the slant and the Y on the quick flat route vs. an unblocked edge rusher in Polamalu. Ball has to come out quick—or the protection scheme needs to be changed at the line of scrimmage.

1. Protection scheme: The Ravens are using a six-man protection scheme with the RB staying in. Ray Rice blocks contain to the closed side of the formation—but that leaves Polamalu unblocked to the open side. If I am watching this on tape, I slide the O-Line to the closed side and scan Rice to pick up Polamalu off of the edge. That would give Flacco the time he needs to hit the flat route or even look to the second level and the slant route.

2. Cover 0 technique: Play inside leverage and take away any inside breaking routes (use the sideline as your help). As a DB, you expect the ball to come out quickly because of the pressure, so use a flat-foot read and drive hard on the 3-step routes. No excuse to give up a route thrown to the inside against your leverage.

3. Polamalu: I talked about this before when I broke down blitz techniques here at the NFP. It isn’t good enough to just get a sack in the NFL—especially as a free runner to the QB. Polamalu goes directly for the ball and rakes down on the throwing arm. This is clinic tape of how to attack the QB from the blindside and make a big pay in a crucial situation.

Check back to the NFP following both Divisional Playoff games on Saturday for my game notes: analysis, X’s and O’s, etc.

Want to work in the NFL? Click here to sign up for the NFP’s “Chalk Talk at the Combine” February 25th in Indianapolis.