Inside the playbook: Brady to Moss

Throughout May and heading into training camp, the NFP’s Matt Bowen will take you inside the playbooks of the NFL -- basic defenses, the running game, red-zone passing, fire zones, etc. -- to give you a better understanding of what your favorite teams are doing on Sundays.

Click here for the previous edition of “Inside the Playbook.”

We started out this playbook series breaking down the Tampa 2 coverage. A 2-deep, 5-under zone coverage that turns into a 3-deep, 4-under look with the Mike Backer running the middle of the field. Earlier this week, we talked about two specific routes — the 7/Flat and “999” — that are specifically designed to take advantage of this coverage.

Today, let’s look at another route, one that was put on display by the New England Patriots during the ’09 season when they traveled to Indy to take on the Colts — a club that still plays plenty of Tampa 2. First, we’ll break it down on the chalkboard and then move over to the video replay to see how Tom Brady was able to use play action to get the ball down the field to WR Randy Moss.

The Pats are in an Ace personnel look (2 WR, 1 RB, 2 TE) with an extra lineman in for the on-the-line, or “Y” tight end in a “U” wing set. A classic one-back New England personnel package they use in their power running attack. As I’ve written before, the Patriots are a team that likes to use multiple personnel sets throughout the course of a game — often switching between series. The Colts are in your basic 4-3 front and playing Tampa 2 in the back end.

The route we want to examine today is called the “Speedo” or the “Cross-Country Dagger.” It’s a max-protect (8-man protection) with only two receivers going out in the route — Randy Moss and Wes Welker. The “X” receiver (Welker) stems hard inside to gain depth and then carries his route across the field to the opposite numbers — looking for the hole that will be vacated by the SS in the zone. The “Z” receiver (Moss) uses short motion and then runs a basic “9” or Go route straight down the numbers — looking to draw the one-on-one matchup with the safety. 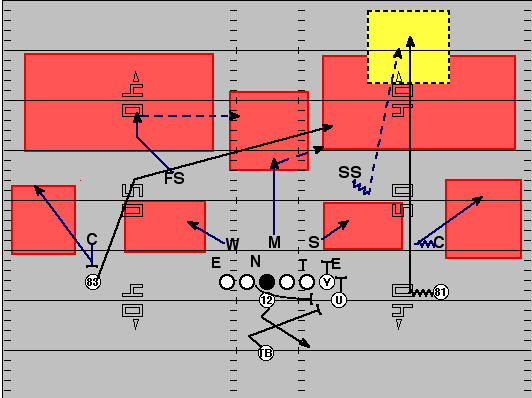 The key here is the play action. Like we talked about above, the Pats are in a running set, pull the open side (weak side) guard, and running back Laurence Maroney goes through his normal footwork as if he’s getting the ball. QB Tom Brady completed the fake, and because of the max protection scheme, has plenty of time to throw the ball down the field.

However, why does this turn into an explosive play for the TD against a defense that’s designed to force the QB to throw underneath?

Before we get to the video, let’s talk about Colts’ SS Antoine Bethea. Safeties in this defense are taught to read run/pass by looking at the No. 1 receiver (Moss). He will tell you everything just by his release. But as we’ll see in the replay, Bethea has his eyes in the backfield and takes a step toward the line of scrimmage due to the play action. And if you look in the backfield with Randy Moss aligned on the outside — forget about it.

Some teaching points from the tape…

There’s a simple reason the Pats put Moss into short motion before the snap — to avoid the jam. As we talked about when we broke down the Tampa 2, the corner is taught to jam and re-route the No. 1 WR. But when the wideout goes in motion toward the ball, he cannot chase and get outflanked to the flat. What this does is allow Moss to get a free release off of the line of scrimmage — and gain top speed down the field. A nasty thought for any DB in the NFL.

No safety in the NFL is going to make a tackle for a loss when he’s aligned in a Cover 2 look. They’re secondary run defenders in this defense, and all it takes at this level is to watch a safety take one false step toward the line of scrimmage — because he’s already beat. Instead, Bethea should have shuffled, read the release of Moss and turned his hips sooner, which would have allowed him to play Moss on his hip — instead of chasing from behind down the field. Then he could have found the ball in the air.

As a defensive player, you have to know where you are on the field and what the sticks say. First and 10 with the ball near or between the 40-yard lines equals one thing — the deep ball. As a Cover 2 defender, expect to see the vertical game and react to the run. This is when the offense will waste a down and try to take a shot down the field. Field position, plus down and distance, is the first thing you should know when you break the huddle.

It has happened to plenty of safeties — including myself. First and 10 between the 40s, ‘Skins-Giants, Kurt Warner to Tim Carter. And I was the fish.