Inside the playbook: Brady vs. the Cowboys

Let's go back to Cowboys-Patriots in the final minute. Tom Brady takes this offense down the field and sets up a shot at the end zone. The result? An 8-yard TD pass to TE Aaron Hernandez on the dig route (square-in) out of the “Pin” combination.

Today, we will break down the route, personnel and formation alignment on three different levels (chalkboard, pre-snap alignment and video) to give you a better understanding of why the Patriots’ TEs are weapons inside of the red zone.

A quick set up. The Pats have their Ace (or 212) Personnel on the field (2 WR, 2 TE, 1 RB) in a 2x2 “Orange” alignment with a stack look to the open (weak) side of the formation. Cowboys’ defensive coordinator Rob Ryan counters with coverage (instead of pressure) and plays Cover 4 (quarters). 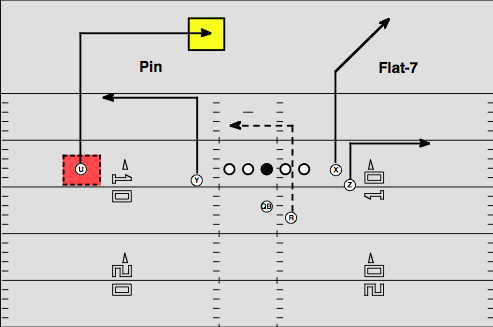 - WR splits. Both Branch and Welker are aligned inside of the numbers (with a reduced split) to create room for the 7 and the flat. To the closed side, the wide split from Hernandez tells you to play for the 9 (fade) or an inside breaking route. Can’t run an outside breaking route from that alignment—because you will run out of room. 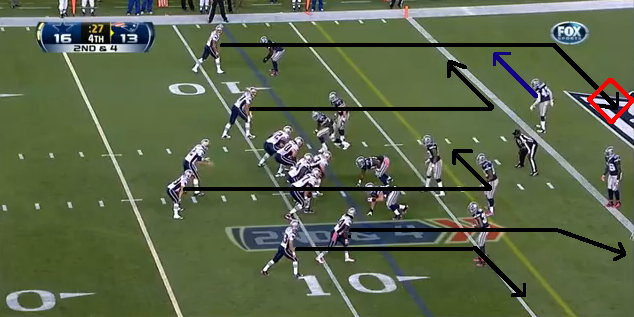 - The rule in Cover 4 for the SS is simple: take any vertical release by No.2 (Gronkowski) after a depth of 12-yards. No vertical from No.2, then turn to No.1 and help on any inside breaking route to protect the CB playing outside leverage.

- The Patriots use Gronkowski to test the discipline of the SS (the idea behind the "Pin" route). Break the out route at a depth of 8-10 yards and bait the safety into driving downhill--leaving the CB in a tough spot.

- Check out the release (and route stem) from Hernandez. Hard, inside release (vs. outside leverage) with a vertical stem that puts the DB on the outside shoulder of the Patriots’ TE when he breaks to the dig route. And there is no safety help.

- The Cowboys only rush two in this situation (and drop nine into coverage). From a defensive perspective, you want the ball to go to Woodhead (R) on the “check-release” out of the backfield. Both the dig route from Hernandez and the 7 route from Branch should be “bracketed” by the corners and the safeties.

Forget coverage and the route concept here for a minute and just focus on the throw from Brady. Down 3, under 30 seconds to play and the Patriots’ QB puts the ball on the up field shoulder (away from the CB). That is how the best QB in the NFL closes out a game.