Inside the playbook: complex blitz schemes

Click here for the previous edition of Inside the Playbook: The “Spot” Route

I wanted to try something different today and focus on the chalkboard. Why? Because to really get inside an NFL playbook, we need to talk about the complex schemes that are hard to replicate—and hard to stop.

In today’s NFL, defenses are becoming more attacking and require a high level of game planning—and study—when we put their schemes up on the chalkboard. Think of the Jets under Rex Ryan, the Steelers under Dick LeBeau, the Saints under Gregg Williams, etc. These aren’t defenses that sit back in Tampa 2 or play coverage over pressure. Instead, they try to dictate the flow of the game to an offense—and force them to react.

Let’s use an example of one of Gregg Williams’ blitz schemes: Ruby Scorpion 77 Dime. It is a scheme that caters to the safety position and one I played in during my time in Washington. 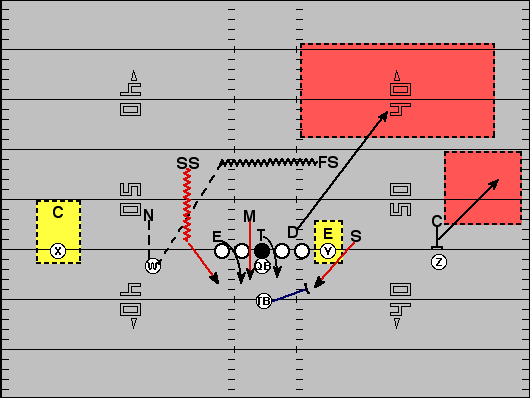 As we can tell, this looks like a lot going on—and it is. But, we can simplify it. The idea isn’t complex: bring a 5-man pressure and force the QB to get rid of the ball. The yellow highlighted boxes indicate a player in a man-to-man situation. Lets break it down by position….