Inside the playbook: defeating the Tampa 2

Throughout May and heading into training camp, the NFP’s Matt Bowen will take you inside the playbooks of the NFL -- basic defenses, the running game, red-zone passing, fire zones, etc. -- to give you a better understanding of what your favorite teams are doing on Sundays.

Click here for the previous edition of “Inside the Playbook”

We started off our “Inside the Playbook” series with a look at the Tampa 2 coverage—a core scheme run by such defenses as Indianapolis, Chicago and Minnesota. A 2-deep,5-under defense that turns into a 3-deep, 4-under look (similar to that of Cover 3) with the Mike Backer running the middle of the field—essentially matching with the inside vertical seam.

Today, let’s look at two specific routes—routes that are a part of every offensive playbook in the NFL—designed to stretch this defense and lead to explosive gains: the 7/Flat and the “999.”

Let’s start with the 7/Flat. I put the offense in “Posse” or “311” personnel (3 WR, 1 TE, 1 RB) against the basic Nickel package on defense (5 DB, 2 LB, 4 DL), where the nickel back replaces the Sam linebacker. The offense is in a 2x2 alignment with the running back in the “dot” alignment behind the QB. 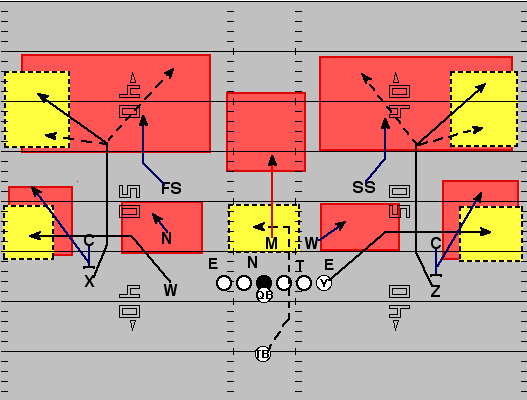 The key to beating the Tampa 2 with this scheme is the “7” (or the Flag Route). Both No.1’s (“X” and “Z”) take a hard inside release, stem to a vertical alignment and break their route between 12-15 yards towards the corner of the field. The objective here is simple: find the hole between the deep half safety and the corner who is sinking to provide a cushion—or time—for the safety to get over the top of the WR. As you can see, the highlighted yellow box is the target for the QB, and as always, safeties in Tampa 2 have to be alert for the No.1 WR to use an inside release to set up the “7” and then break to the post.

The rest of the route looks simple, but again, it is designed to put more pressure on the safeties. Both No.2’s (“Y” and “W”) run flat routes that act as a second read for the QB and as bait for the corners. From an offensive perspective, the QB wants the corners to react up to the flat, opening the hole in front of the safeties. If the corner sinks—as taught—the QB will throw to the flat, and if the corner squats on the flat route, then the QB will look to beat the defense by dropping the ball over the corner to the No.1 WR.

The RB scans for protection and then leaks out as a check down option. The defense will allow the QB to dump the ball off to the middle of the field, react, run to the ball and make a tackle.

By far, the 7/Flat forces the defense to play the technique of the Tampa 2 more than any other offensive scheme.

The second route I want to break down today is the “999,” which looks and acts the same as running 4 Verticals—only the TE is the player to watch. Another way to beat Tampa 2 and another way to exploit this defense by taking advantage of the Mike Backer and the two deep half safeties.

We have the same personnel on the field; expect that the offense is set in a 3x1 alignment. The key to this route in the release by the No.1s (“X” and “Z”). Both WRs want to take a hard outside release to stretch the safeties and force them to widen from their landmarks (top of the numbers), which will open up the inside vertical seams. By doing this, the offense will have more room to work the middle of the field without the safeties being able to react and make a play on the football—all because of the release.

No.2 to the strong (or closed side), the “W,” will release inside on the nickel and then stem his route to get vertical, putting pressure on the Mike Backer—who has to run with any inside vertical route. However, the key aspect to the “999” is the TE or the “Y.” The TE is the No.3 receiver to the closed side. He essentially becomes the fourth vertical in this scheme, except that he stems his route at a deep angle—becoming the No.2 receiver to the weak side (or open side) at the end of the route.

Why do this? All because of the Mike. In this scheme, the offense is running two verticals at the Mike (“W” and “Y”) and forcing the linebacker to open to the closed side, get to his drop and read the eyes of the QB. A tough situation for even the most athletic player at the position. Especially with the safeties now playing wider due to the release of the No.1 WRs.

As we saw above, the RB will check release and the QB will dump the ball if he doesn’t have one of the vertical routes open down the field.

Think of Vernon Davis in San Fran or Dallas Clark in Indy. Two TEs who will eat up the Tampa 2 running this route. They should expect a hit from the closing safety, but it is a completion nonetheless, and a big play for the offense.

Like we talked about when we broke down the Tampa 2, it is a solid call when run correctly. But, like any scheme, it can be beat.