Inside the playbook: Eagles Hi-Lo concepts

Click here for an inside look at Andy Reid's game plan.

Let’s go back to the chalkboard today and focus of a series of route schemes that are a regular part of Andy Reid’s game plan in Philadelphia: the Hi-Lo concepts.

Inside breaking routes that test the leverage of man coverage and the technique of zone based defenses. Today, I want to look at three of them: Hi- Lo Crossers, Hi-Lo Opposite and one of Reid’s favorites, Hi-Lo Triple-In Flood. Check out the drawings (take note of where the ball is going) and then we will get into some quick coaching points to break them down.

I have Ace personnel (2 WR, 2 TE, 1 RB) on the field in a “Doubles Exchange” alignment. (2x2 set with X aligned off of the ball). As you can see, the route scheme plays out with a high to low read (“Hi-Lo” concept). When we add the term “crossers” in the playbook, we get two short underneath routes from the TEs (Y,U) with the Z running the intermediate dig route to create a 3-level concept inside of the numbers.

An ideal scheme to run vs. man coverage (think Cover 1 with FS in the middle of the field). Defenders aligned with outside leverage playing a route concept that breaks back to the middle of the field. It can cause natural pick situations and it allows the QB to throw to a receiver with the defender now in a trail position. A tough matchup in 3rd and medium situations and inside of the red zone. 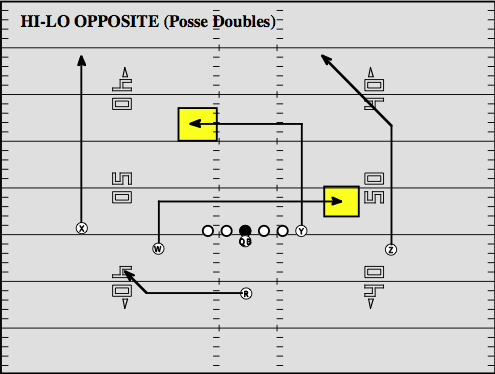 I have Posse personnel (3 WR, 1 TE, 1 RB) on the field is a basic “Doubles” alignment (2x2 with W off of the ball in the slot). Again, Reid and the Eagles want to work inside of the numbers. This time, however, we see the high to low read coming from “opposite” sides of the field. The TE (Y) runs the dig route with the slot receiver, W, running the crosser, or short drag route. On the outside, we can see multiple concepts from both Z and X. Here I am clearing out with the X on the 9 (fade) route and bringing the Z back to the deep middle of the field on the post—just to keep the FS honest. But the ball is going to be thrown between the numbers.

Another concept that will test man coverage and can be an option vs. zone-based teams. Zone coverage can be tested with the W receiver sitting down in the underneath holes and the Y running the dig vs. a Mike Backer in the Tampa 2 and vs. the SS in Cover 4. 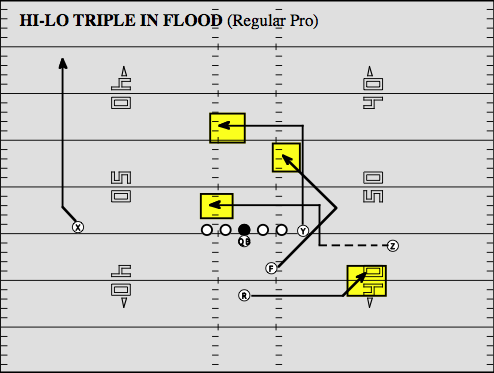 This is a nasty route scheme. During my days as a Redskin, the Eagles would dial this up in the red zone and see plenty of production. Here, we are looking at Regular personnel (2 WR, 1 TE, 2 RB) in a “Pro” alignment with Z on the short divide motion to form a bunch. The same alignment and pre-snap movement that many clubs use to run the “Spot” route that we broke down last week. The key here, however, is the “Flood” aspect—because the Eagles are releasing four receivers strong.

Anytime you are playing a bunch formation, you have to be technique sound as a defense—in both zone and man coverage. Routes have to passed off in Cover 1 (play four on three or “Box” technique) and you can’t chase a receiver in zone coverage. The problem here is the RB (R) releasing on a the swing route. He has to be accounted for and when QB Michael Vick can flip the ball out to LeSean McCoy, one missed tackle and we are looking at an explosive play up the field. Bottom line, this route scheme can be a major issue to any defense and it will translate into points in the red zone if it isn’t played properly.

One thing to remember with Reid’s offense…

Where does the ball go? Thrown between the numbers and the hash. We will see multiple concepts from the Eagles in 2011, but when they need a play, don’t be surprised to see one of these routes show up on the tape.

Want to see a concept or coverage broken down? Send me an email at: matthew.bowen@nationalfootballpost.com