Inside the playbook: Favre to Rice

Click here for the previous edition of Inside the Playbook: Rivers vs. the Giants 2-Man

Today, I want to talk about one of the most basic routes in the NFL playbook: the spot route. It is run from a variety of alignments and with multiple personnel groupings at this level. But, when the route starts to develop it is always the same—a 7/flat/curl combo. A three-man route that is often disguised by its pre-snap alignment, but it is highly effective.

We will use the TV tape from the NFC Championship game and break down why Brett Favre was able to find Sidney Rice for a TD late in the second quarter to give the Vikings a 14-7 lead over the Saints.

Let’s set it up. The Vikings are in their “Posse” or “311” personnel (3 WR, 1 RB, 1 TE), and come to the line of scrimmage in an empty set (no RB in the backfield). They align in a bunch formation to the closed side of the formation into the boundary and use a two WR look to the open side, with the slot up on the ball.
The Saints counter with their base nickel package (4 DL, 2 LB, 5 DB) and choose to play coverage under coordinator Gregg Williams instead of bringing pressure in this 3rd and Goal situation from inside the 10-yard line. 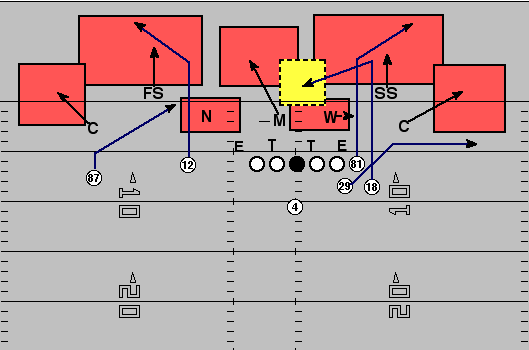 The Vikings run the spot route combination out of the bunch. The TE, No. 81 Visanthe Shiancoe, runs the 7 (or flag route), the RB, No.29 Chester Taylor, runs the flat Route and the WR, No. 18 Sidney Rice runs the curl. On the backside, the slot receiver, No.12 Percy Harvin runs the 7 and the “X” receiver, No. 87 Bernard Berrian runs the slant.

But, Favre’s first read is to the closed side and the spot route. He can come back to the open side if he is in trouble and look to the slant, however, he wants to hit the curl or dump to the flat. Those are his primary reads. The 7 by Shiancoe? It is an option, but it is designed to clear out the defense and allow Rice to find a hole in the coverage.

As we talked about above, Williams and the Saints play coverage in this situation. Previously here at the NFP, we broke down the Tampa 2 defense and this is what we are looking at now—but there is a slight catch. In the red zone, defenses will play “Red 2.” The difference—the corners will sink (instead of jamming the No.1 WR at the line of scrimmage) and create what is almost a 5-deep look. The concept is simple: force the QB to throw the ball underneath with five defenders on or near the goal line.

However, Favre and Rice do find a hole in the zone. And, when we watch the TV tape we will see how Favre gets the defense to move—opening up a nice little pocket for Rice to settle in and make a play.

Favre has time to throw in this situation because the Saints are dropping seven into coverage and only rushing four. The ‘pump’ that Favre gives to the 7 route forces the Will linebacker to come off of his landmark and break on what he thinks is the QB release. Linebackers—and any underneath players in Cover 2—are taught to drop, get to their landmark, buzz their feet and read the QB. That is why Derrick Brooks of the Bucs made so many INTs back in the day—he read the QB and came across from the backside to step into the throwing lane. Here? The exact opposite. When the Will linebacker moves, Rice is able to settle the curl route right in the hole. And, with Favre at QB that ball is coming with some heat on it. All it takes is for one player to chase a route, and this defense can collapse.

Why run this route out of an empty set and in a bunch look? As we talked about above, this route is very simple for NFL standards. Offenses will window dress their alignments to create confusion and to force the defenses to prepare for multiple routes before the snap of the ball. Out of the bunch the Vikings could run the “OVS,” or Outside Vertical Stretch (9/7/flat combo), the Hi-Lo combo, the “spacing” route (all curls), the “pin” route (post/dig/ flat combo) and multiple other combinations. And any time an offense aligns in an empty set, you think something is exotic is coming from a defensive perspective. But the Vikings keep it simple here and just dress it up to look nice when they come out of the huddle.

I wanted to briefly detail the 7/slant combo between Harvin and Berrian. It is a small key we are looking at, but there is a reason Harvin (the slot receiver) is aligned on the ball in this situation. We usually see the “X” receiver on the ball and the slot receiver off of the ball—to give the slot a free release. Here it is the opposite because of the combination. With Harvin running the 7, he has to clear through the zone and force the nickel corner to sink. Berrian can now run the slant to the vacated zone and the timing is perfect. Yes, a small detail, but another key in reading concepts before the ball is snapped.