Inside the playbook: Jennings beats the Vikings

Click here to read the entire Inside the Playbook series

Let’s go back to the Packers 28-24 win on Sunday night at Lambeau over Brett Favre and the Vikings. Down 14-10 in the 3rd quarter, Green Bay had a 2nd and 5 situation at the Minnesota fifteen-yard line. Bring Posse personnel (3 WR, 1 TE, 1 RB) onto the field against Vikings’ base nickel package and align in a 2x2 formation. Plenty of route schemes to work with that can beat Cover 2 and Cover 1—the two most played defenses (outside of pressure) inside the 20-yard line.

The Packers run the “Dino” double post. Two post routes run from the same side of the formation with No.1 (the open side “X” receiver) widening the cornerback to create separation down the field. The Vikings are playing “Cover 1 Robber.” Think of your base Cover 1 scheme with a single high safety in the middle of the field. Outside leverage technique on the receivers and the Mike Backer (the “robber”) dropping to theshallow hole to cut off any inside breaking routes.

As we can see from the chalkboard, Green Bay is running the double posts to the open side of the formation with a basic Smash-7 (or Smash-Flag) combo on the backside. The RB, John Kuhn, will check release to the closed side and run the swing route to give QB Aaron Rodgers a check down option. However, once Rodgers reads that Minnesota is playing Cover 1 by identifying the drop of the FS to the deep middle of the field, he knows that he is going to read to the open side of the formation.

This is where the route comes to play. Once we look at the video replay, you will see that Jennings is able to create that extra separation vs. CB Asher Allen—opening up a nice throwing lane for Rodgers. And all of the pressure now falls on the FS—who is stuck playing two routes in the middle of the field.

1. The route: Run two routes towards the middle of the field. The first, from Driver, requires the slot receiver to release with a hard inside stem. Get vertical and break to the post—in front of the free safety. Driver wants to force that FS to either hesitate in the middle of the field or take a false step. Basically, occupy the free safety. The theory behind the underneath post is to allow Jennings to now essentially work one-on-one vs. the CB. 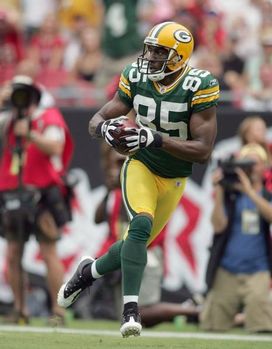 2. Jennings vs. Allen: The matchup the Packers’ want. Just as we said above, the FS has to honor Driver’s route. Asher Allen, the Vikings’ CB, is playing off-man technique, but as we can see from the video replay, gets too high and takes the bait when Jennings shows him he is going to the 7-cut. Overplays to the outside and opens his hips—and that gets you beat every time when we discuss man-to-man techniques. Was it a great move? Without a doubt. But, as we broke down yesterday, it still comes back to technique. “Open the gate” and you are beat as a DB. With the FS still playing the middle of the field, Jennings can keep Allen on his back shoulder and finish the route. 3. The Free Safety: In a tough spot vs. the “Dino” route—especially with limited space to work with in the red zone. As we have talked about before, playing in the secondary inside of the red zone allows for little or no margin of error. As a FS, you have to split the two post routes. Easier to do in the open field when you can open your hips and either drive downhill on the shallow post or “head-whip” and run with the deep post route. Sitting in the end zone, however, you almost have to play with flat foot read technique (no backpedal) and break on the throw. On this play, he is late and can't help out Allen.

4. How you defend the “Dino” route: Any form of Cover 1, Cover 3, or any defense with a single high safety, is going to stretch the open side CB and the FS. No way around that. I don’t like to see man-coverage in the red zone unless the ball is inside of the 10-yard line. Too much field to cover in my mind. I am a big fan of Cover 2 in this situation. The underneath post (Driver) is carried by the Mike Backer running the inside vertical seam, while the deep post (Jennings) is run to the FS playing the deep half.

What would you play? Let me know…